Cogs was made by Dave Fox in 2007. A century ago, the wheels in Cogs played a vital role in keeping the mill running. Today, thanks to the creative wheels turning in artist Dave Fox, they have been reimagined as massive industrial planters. As you drive by this piece you … read more

Cogs was made by Dave Fox in 2007. A century ago, the wheels in Cogs played a vital role in keeping the mill running. Today, thanks to the creative wheels turning in artist Dave Fox, they have been reimagined as massive industrial planters. As you drive by this piece you may notice that it’s not technically in a roundabout. Instead, Cogs anchors two smaller traffic circles know as a dog bone. We like to think of it as a two-for-one.

Bond St, Bend, OR Get Directions

Ghost was made by Andy Wachs and Erik Gerding in...

About the Piece: The inspiration for “Tomas’ Riddle” came from the...

Sound Garden was made by Lee Kelly in 2010. Award-winning...

About the Piece: This painting was created during a First Friday...

Community Mural by Base Camp Studio

About the piece: This piece was inspired by Bend’s Tower...

Gilded River was made by Ken McCall, Mark Baltes, and... 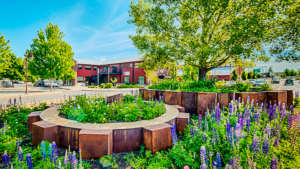