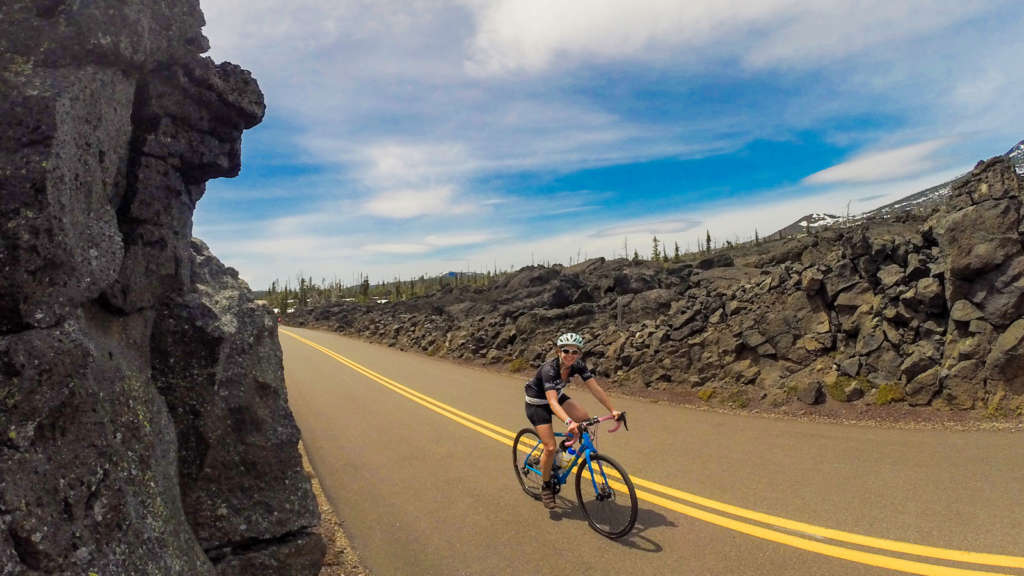 While Alberto Contador (Spain) was busy winning the Tour de France – “beating” Luxembourg’s Andy Schleck by a whopping 39 seconds (the blink of an eye in the three week event) – 172 riders from all over the world descended on Bend, Oregon for the Cascade Cycling Classic. The CCC is the longest consecutively run elite stage race in the country, and an event where Lance Armstrong made an early appearance and (perhaps ironically) Floyd Landis made a recent one.
For six days and as many grueling stages, riders on super-thin wheels sped through town while the city watched in fascination. How could they ride so fast, all clustered together in a pack (peloton) wheel to wheel? But ride they did, in stages ranging from 14 to 83 miles.
At our house, Adam and Tyler, two riders we hosted from the Yahoo! Cycling Team, gave us inside cycling tidbits – about the races in France and in our own back yard. They had their own vernacular, these guys, with phrases like: The race just exploded, and, Is that Sastre off the back? My favorite: So what? He’s a sprinter; what’s he going to do? And Dopers suck.

Speak of dopers, while Lance Armstrong was spinning his wheels in his final TdF, Floyd Landis, dethroned winner of the 2006 Tour de France, showed up in Bend and raced in a t-shirt. (Which seemed weird – like, can’t he find a normal biking jersey without a logo – even though he’s banned from endorsements?) The fallen star redeemed himself – at least in many eyes – in an interview for ABC’s Nightline “Did Lance Cheat?” in which Landis finally came clean about his use of performance enhancing drugs while on the U.S. Postal Team in France. The same team and the same alleged abuse he shared with Lance Armstrong. “It’s accepted,” he said. “There is one rule for the outside world and a different one for the peloton.”
Our two riders were glued to the TV screen during the interview. Then they ate copious amounts of carbohydrates, took naps and got ready for the evening ride: the Twilight Criterium.
The “Crit” is an adrenaline rush for riders as well as 10,000 spectators, as the cyclists speed around four tight corners in downtown Bend again and again until 75 minutes tick by. Citizens crowd the streets with cheers and cowbells as the riders scream past them.
At the end of the week, our Yahoo! guys were not on the podium. But we expect big things from them. And hope to see them again next year as this most popular event continues its own Central Oregon winning streak.

Jersey Wrap Up:
What’s all the fuss with colored jerseys and why are they so coveted? While colors vary in different international races, these are the colors and their significance in the Tour de France and the Cascade Cycling Classic:
Yellow: Awarded to each stage winner as well as the overall winner of the event
Green: Points leader
Polka Dot: King of the Mountains (fastest climber of each stage/overall)
White: Youth Leader
Red: Intermediate sprint leader

Codes and Traditions of the Tour de France:
Lanterne Rouge: The “red lantern” is a phrase given to the competitor in last place, referring to the red lantern hung on the caboose of a railway train.
Hors Catégorie: An incredibly tough climb that is “beyond categorization.”
Flamme Rouge: The red pennant (kite) hanging from an archway that signifies the final kilometer of the stage/race.
Champs Elysees: Leaders sip champagne as they ride the most famous boulevard in cycling: the ceremonial final ride into Paris.

Unwritten Code of Cycling Honor:
• Whenever reasonably possible, one allows a rider to lead the peloton when the race passes through his home village or on his birthday.
• One does not attack a leading rider who has suffered a mechanical breakdown or other misfortune.
• One does not attack another who is eating in the feed zone or one who is enjoying un besoin naturel (roughly translated to a natural need, the practice of answering nature’s call).
• Riders do not launch attacks on the leader of the Tour de France on the final stage, giving the leader one final day to bask in the glory of the yellow jersey.

Sometimes, you want to walk in circles. I don’t mean twirling ‘til you're dizzy (though if that’s your jam, rock on with your spinny self)....
Read Post

Want to weigh in on what happens in Bend’s outdoor spaces?

5 ways to be a more responsible trail user

Greetings, Bend friends! It’s longtime Visit Bend blogger Tawna, and this week we have a special treat for anyone and everyone who wants to know...
Read Post

6 tips for fire safety in Bend this summer

If the haze hovering in Bend today tells us anything, it’s that there’s one doozy of a fire season heating up for 2021.  As I...
Read Post
‌