Get oriented (or disoriented?) with a hike up Pilot Butte in Bend, Oregon

Get oriented (or disoriented?) with a hike up Pilot Butte in Bend, Oregon

At least once a week, someone asks me where to hike near Bend. Since I have entirely too many favorite hiking spots, I often blather without taking a breath until I’ve named every gorgeous trail within a 100 mile radius.

Sometimes, that’s what the person wants. 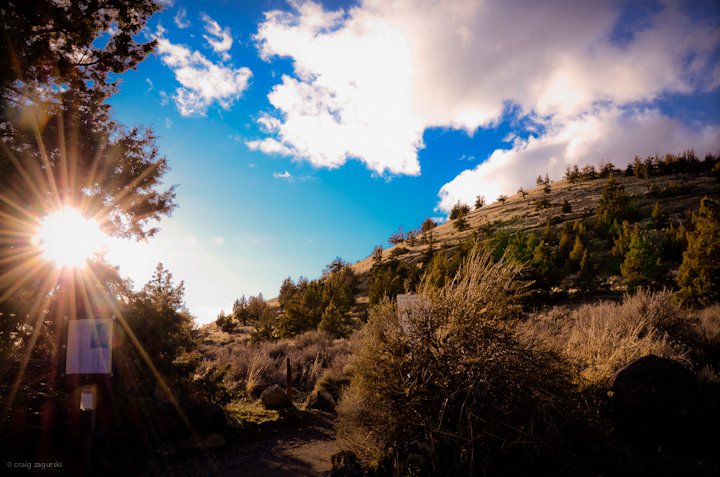 Other times they’ll frown and do that scrunchy-forehead thing that means I’ve provided entirely too much information.

“How about something – simple?”

Hey, I can do simple. If that’s what you’re after, or if you just want to orient yourself to the layout of Bend, look no further than Pilot Butte State Park.

Here’s how easy it is – from almost any point in the city, stand outside and turn in a circle. When you spot the 500-foot, brownish cinder cone jutting up from the northeast part of town, stop moving. That’s Pilot Butte.

Technically an extinct volcano, Pilot Butte is a 100-acre State Scenic Viewpoint that was acquired by the city in 1927. You have several options for reaching the top. One hiking trail is a steeper, shorter route on a dirt path that leads all the way to the peak. The other offers a more gradual ascent that follows the paved road for a portion of the climb.

You can also drive to the top between mid-April and late fall when the road isn’t icy. Though I’ll admit I’ve driven it once or twice with out-of-town guests who aren’t physically able to hoof it, I encourage you to get out of your car and walk to the top if you can. The hike isn’t tough, nor is it long, and you’ll get a 360-degree view of the city as you make your way up the trail. There are benches along the way if you need to stop and catch your breath or just check out the scenery. It’s roughly a mile (depending on route) and you can generally make it up and down in under an hour.

No matter how you opt to reach the top, you’ll want to spend some time savoring the view once you get there. To the west, you’ll see the Cascade Mountains spread out in all their snow-capped glory. You’ll spot Mt. Bachelor, Three Sisters, Mt. Jefferson, Broken Top, Mount Hood, and a variety of other peaks.

You can also survey the layout of the city itself, which is a great way to get oriented. To the east, you’ll see the Forum Shopping Center with Costco, Old Navy, Barnes and Noble, and a variety of other shops. Beyond that is the endless Oregon Badlands Wilderness. 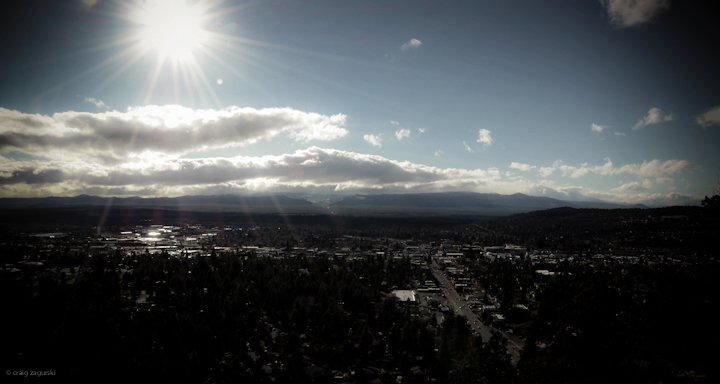 Face west and you’re looking toward downtown Bend and the Deschutes River. To the North is Redmond. To the South is Sunriver. There are oodles of homes and trees and cars and shops in between, and you can spend hours up there just staring down at the city like it’s your own private ant farm.

Dogs are welcome at Pilot Butte on a leash, though keep in mind there’s no water at the top. There’s a drinking faucet at the bottom, but it’s only turned on in warmer months. There’s also a great playground at the bottom for the kids or the adult members of your party who’ve never outgrown their fondness for slides.

Once you’ve made it back down to the bottom, consider rewarding yourself with a stop at Bend’s Popular Pilot Butte Drive-In. Their breakfasts are huge and delicious, and their burgers are the best in town.

Plus you’ll be able to gaze up at the cinder cone itself, shake your fist in triumph, and shout through your mouthful of French fries, “Oh yes – I have conquered you!”

Big thanks to Craig Zagurski for the lovely Pilot Butte photos!