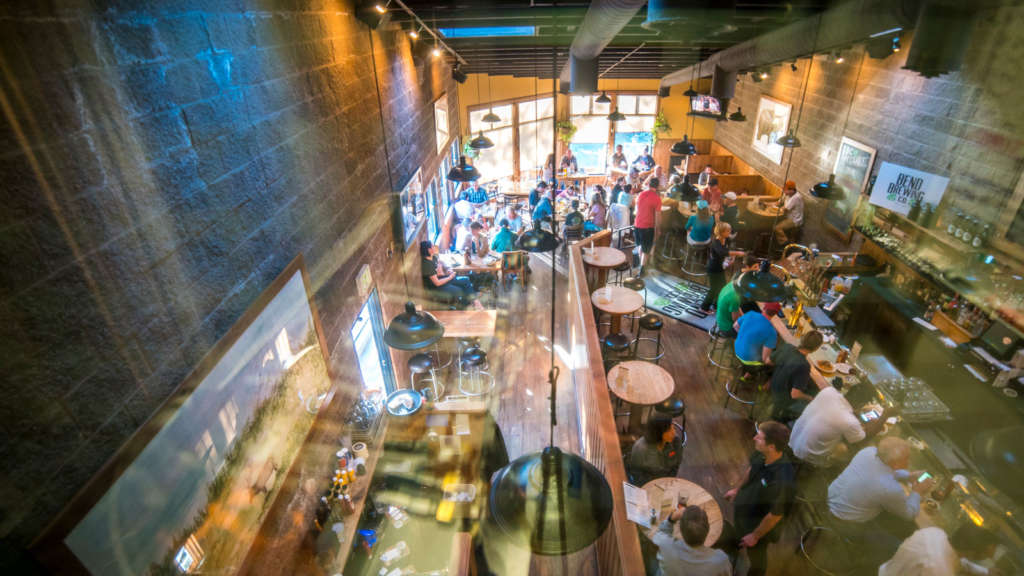 Public service announcement: if you embark on a mission to find your city’s best mac and cheese, consider spreading your research over several weeks instead of consuming twelve metric tons of cheesy goodness in a 48 hour period.

Now that we’ve got that out of the way, I should state for the record that I adore mac and cheese. There’s something about this traditional comfort food that’s so delightful when the weather turns chilly and bellies growl for something warm and wholesome.

Fortunately, Bend has an abundance of incredible mac and cheese. Most restaurants offer some variation of this old standby, but here are some of my favorites. . .

Some people want their tastebuds to stand at full attention and yell “woohoo!” after one bite of mac and cheese.

The Buffalo Macaroni at Brother Jon’s Public House is legendary among locals, and the name of the dish is often spoken in hushed, reverent tones. It’s made with free-range ground buffalo, sautéed onions, jalapeños, tomatoes, green peas, macaroni noodles and creamy cheese sauce. Served with a side salad and bread, the portion is huge enough that I usually get four meals out of one order. The jalapeños add the perfect kick, and all the flavors come together in a perfect symphony of spice and creamy goodness.

Not to be outdone, Deschutes Brewery offers their own version of zingy mac and cheese. I have to confess, I was skeptical when I read the combination of ingredients. It sounded like overkill.

Holy cow, you guys – this mac and cheese is unbelievable! The menu calls it Sweet & Spicy Mac and Cheese, and it includes hill country ham, spinach, caramelized onions, roasted red peppers, Tillamook cheddar cheese, and corkscrew noodles. Sweet & spicy is the perfect description, and you’ll find yourself digging your fork in over and over just to experience the enchanting contrast of flavors.

There’s nothing wrong with keeping it simple, particularly when it comes to an old standby like mac and cheese.

There’s also something to be said for enjoying it while cozied up by the fire in your jammies. If you’re visiting Bend and have a microwave in your hotel or rental property, check out the Not Your Mother’s Kraft Macaroni and Cheese at Devore’s Good Food Store. This handy take-n-bake option comes in a one-pound or two-pound size, and is made with Dececco penne pasta, Bandon sharp cheddar cheese, Tillamook cheddar, local milk, bread crumbs, fresh local cream, organic flour, butter, salt, and pepper.

At first, I assumed it would be best baked in the oven. After watching it sit there for five minutes at 375, I got impatient and stuck it in the microwave. Perfect! The cheese was wonderfully melty, and the croutons on top stayed plenty crisp. The two pound size was ideal for either two very hungry adults, or two moderately hungry adults and two kids ages five and ten (both of whom declared this dish to be “yummy.”)

Another traditional option with a bit more pizzazz is the 10 Barrel Mac & Cheese at 10 Barrel Brewing Company. This version is made with four-cheese sauce, pancetta, and shallots, tossed with elbow pasta and served hot in a cast iron skillet with toast. The brewery also notes that it’s perfect paired with their Nitro beer selection (an option I wasn’t able to explore in the middle of the workday).

Some local dining establishments turn traditional mac and cheese on its head and spin it in circles ‘til it’s dizzy and giggling. A great example is the Curry Crab Mac & Cheese at Bend Brewing Co.

Formerly an occasional feature as a special, this dish became so popular it got its own spot on the menu. It includes curry penne pasta baked with crab meat, fresh tomatoes, green onions, bacon, and cheddar cheese. They’re delightfully generous with the bacon and the crab, ensuring plenty of both in each bite.

The Blacksmith offers several scrumptious mac and cheese options as well, including Smoked Mac & Cheese, Bacon Mac & Cheese, and Truffle Smoked Mac & Cheese. I’m partial to the flavor explosion of the truffle version, though you can sample all three in their fabulous Mac & Cheese Flight for just $11 (or $8.50 during happy hour 4:30-6:30 p.m. & 9 p.m. to close).

A terrific option in the Old Mill District is the Seafood Mac and Cheese at Anthony’s Home Port. This dish features corkscrew pasta, creamy three-cheese sauce, Dungeness crab, bay shrimp, and bread crumbs. It’s a terrific option for seafood lovers, with the added bonus of gorgeous river views while you dine.

By the way, thanks to everyone who made suggestions on Facebook and Twitter to help us narrow down these scrumptious selections. We know we didn’t cover everything, so please share – what’s YOUR favorite mac & cheese in Bend?