Blink and you miss ‘em! Limited-time events, activities, & brews you can only find in Bend RIGHT NOW!

You could visit Bend any day of the year and find something cool to do. That’s just the nature of this amazing mountain oasis.

But some things only come around once a year. If you happen to be in Bend RIGHT NOW (or sometime in the next few weeks) luck is on your side. Here are a few limited-time Bend experiences. 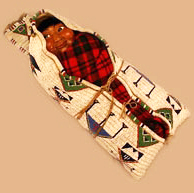 A quirky Lalooska papoose (say that five times fast!) is one of many never-before-exhibited treasures on display at The High Desert Museum.

They had me at bizarre.

It’s a great opportunity to see unusual treasures the museum has never displayed before, and you can read more about it here.

Another family-friendly option is “the train guy” at the Deschutes Public Library.

No joke, the two people who called me about it just referred to him as “the train guy.”

For more than a decade, local train enthusiast Michael Lavrich has set up a giant, active-track display of model trains in the Brooks Room at the downtown library. There’s smoke and tooting whistles and a whole lot of entertainment for all ages.

The display will run from 10 a.m. to 6 p.m. on Friday with a short break for lunch, from 12-5 Saturday and Sunday, and again from 10-6 on Monday. This is a local favorite, so give yourself plenty of time to get in and enjoy it.

You probably want to dress a little more warmly to head out with Cycle Pub this time of year. May we suggest an ugly Christmas sweater?

There’s been a lot of buzz about Bend’s wacky bike bar, and it would be easy to assume things taper off in the chillier months. But that’s just when things heat up for the Cycle Pub of Bend!

Cycle Pub is doing Christmas light tours of Bend, and riders are encouraged to don their favorite ugly Christmas sweaters. Cycle Pub offers special holiday playlists for caroling, and there’s even a route that stops at strategic fire pits along the way. Standard group tour booking rates apply, and they’re always willing to customize routes to suit your needs.

For another fun way to see Bend sights in style, check out the complimentary carriage rides through the Old Mill District. Wagons Ho is stationed between Ben & Jerry’s and O Mo Mo! and riders can hop on there. Tips and donations benefit the Kids Center, and the service is weather dependent. Free carriage rides are offered this Friday and Saturday from 2-5 p.m., and then again December 21-23 from 2-5. Dress warmly, and be prepared to giggle.

If snow-play is more your style, consider booking a Starlight Snowshoe Tour with Wanderlust Tours. These trips are pretty common in winter months, but they usually just take place on weekends. For a limited time, Wanderlust is doing a Starlight Snowshoe Extravaganza. From December 17 through December 30, tours run every night. Special dates like New Year’s are filling fast, so book quickly to get the date you want. Tours are $65 per person, and include guide, snowshoes, instruction, transportation, and hot chocolate.

It’s impossible to talk about unique happenings in Bend without discussing the Bend Ale Trail. I might be biased, but I happen to think this is the best time of year to hit the trail. Seasonal brews offer a chance to sample something you may never try again, and they’re available while supplies last.

GoodLife Brewing Company just released a new brew called Scottish Heart Scotch Ale. It’s the first collaborative project between two Bend brewers, Tonya Cornett of Bend Brewing Company and Curt Plants of GoodLife. I got to try it last week, and found it deliciously malty and caramely (I can make up words, right?) Supplies are limited, and brewers expect it to hold out through late January.

At McMenamins Old St. Francis School they’re offering their seasonal Kris Kringle Winter Warmer on draught. For the first time ever, they’re also selling it in 22oz bottles. This win­ter warmer highlights the rich, toasty, chocolaty malt flavors with generous amounts of four different hop varieties. There’s still some ginger and cinnamon, but the spices are more subdued than in past years.

Next up, have a taste of the Slippery Slope at Cascade Lakes Brewing Company. This is a full-bodied ale that uses crystal malt and generous amounts of cascade hops to produce a great seasonal ale. It’s on draft and also in 12oz bottles, and should last through the second week of January.

Rudolph’s Imperial Red is the tasty seasonal offering from Three Creeks Brewing Company in Sisters. It’s a big, malty, hoppy red-style ale with ten specialty malts and over twelve pounds of hops. They have it on draft, and expect the taps to run dry sometime in mid-January.

So did I miss anything? What’s your favorite seasonal experience in Bend? Please share!