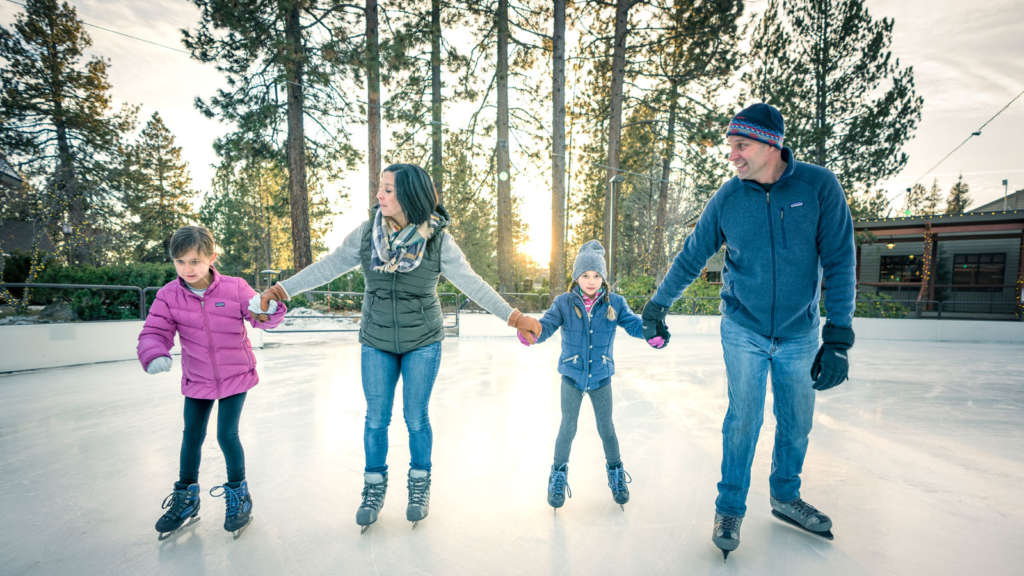 In my non-Visit Bend life, I’m an author. An author with a three-book contract, a scary deadline, and an editor who might turn murderous if I broke both wrists ice skating and missed the aforementioned deadline.

You can see why I was nervous when someone suggested blogging about ice skating in Central Oregon. I haven’t skated since I was 12, and I wasn’t sure my 37-year-old bones could handle it.

As it turned out, I had nothing to fear. Though I stumbled once or twice, I’m incapable of going fast enough to damage much. Not only that, I discovered ice skating makes the perfect winter outing for fun-seekers of all ages and fitness levels.

My first stop was the ice rink at Seventh Mountain Resort. It’s an outdoor rink right on resort property, which makes it a convenient stop after sipping a fortifying glass of wine in the adjacent Rim Rock Bar. Since I was there with two Visit Bend colleagues, the experience seemed more like a girls’ night out than work.

We rented our skates on site for $6 a pair, paid the $8 per person admission, and headed onto the ice. Though my colleagues are skiers familiar with the sensation of sliding around on a frozen surface, my winter activities are more subdued. On a good day, I like snowshoeing. Most days, I’m partial to sipping a glass of wine by the fire while someone else shovels my driveway. I feared neither made me well-equipped for ice skating, but was pleased to discover otherwise.

I made my first lap clinging desperately to the rail around the edge, but by my second lap, I was all hands-free. Before I knew it, I was gliding around like a pro. OK, maybe not like a pro, but at least not like a person with two broken legs.

(Incidentally, I learned U.S. Figure Skating Champion Tonya Harding was at the resort the same time we were, though we didn’t cross paths on the ice. Bummer).

The rink at Seventh Mountain Resort is large, the ice well-tended, and the overall experience was a fantastically good time. That’s probably why I decided to try again.

I wanted to offer a more family-friendly perspective on the ice skating experience, so I summoned my significant other and his two children (ages 6 and 10). On New Year’s Eve, we made the short 15 minute trek to Redmond, where they recently installed a brand new ice rink in the middle of downtown.

The rink is operated by the city’s Parks & Rec department, which makes it an extremely budget-friendly option for families. Our foursome paid a whopping $12 family rate for skates and admission for all of us. Individuals pay $4 for skate rental and admission, or $1 if you bring your own skates. 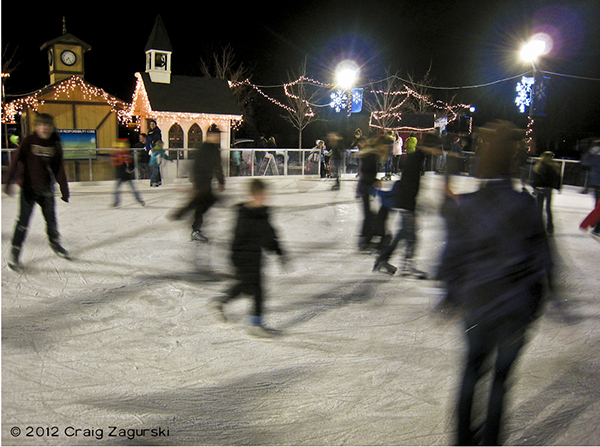 The rink isn’t as large as at Seventh Mountain Resort, but it’s still plenty big. Though it was the first time either kid had been ice skating, the 10-year-old had roller bladed before and took off like he was born wearing skates. The 6-year-old required a little more hand-holding at first, but within an hour, she was maneuvering herself from wall to wall and gliding for long stretches without any assistance.

I’d like to brag that these are highly skilled children with superior physical capabilities, which may be true. Still, it was clear from watching other young skaters that this is something young’uns take to naturally. It’s a perfect family outing even for those who’ve never tried it before. Be prepared — public restrooms are across the street, and there’s no snack-bar on site, so take care of the little ones’ needs before arriving.

Another ice skating option is the ice rink at Sunriver Resort, which is a recently-remodeled outdoor facility with a nice roof over the top. Where weather might be a prohibitive factor in Redmond or Seventh Mountain, skaters in Sunriver can dodge rain and snow. For rates and hours of operation, visit them online.

As you might imagine, ice skating is subject to temperatures being low enough to actually keep the ice frozen. Be sure to check the links for each venue for hours and weather-related closures.

On that note, I’ll leave you with a short video from our evening at the Redmond rink. Looks like fun, doesn’t it?

There’s a reason the week surrounding Independence Day marks the most popular time to visit Bend. Skies are clear and sunny, and there’s a buzz...
Read Post

The best things to do in Bend for June

Sometimes, you want to walk in circles. I don’t mean twirling ‘til you're dizzy (though if that’s your jam, rock on with your spinny self)....
Read Post
‌