When you’ve lived in Bend as long as I have (14+ years) you develop certain notions that get hard to shake.

Take Scanlon’s Restaurant, for instance. This little restaurant off Century Drive is tucked in the corner of the Athletic Club of Bend, and I’ll confess my impression wasn’t always favorable. During my early years in Bend, I found the vibe a bit pretentious and the food mostly forgettable.

Scanlon’s has a new vibe and new menu, and if the Visit Bend crew hadn’t been invited to dinner, I might never have realized how dramatically things have changed!

My new first impression began the second I stepped through the door and admired the updated décor and cozy-chic vibe. We were seated in a comfy banquet room beside a large brick fireplace, and the server kicked things off with a complimentary starter.

Not to diss the basket of bread provided at most restaurants, but this starter was something special. The plate included spinach hummus, bread, and an olive platter, and there was plenty to share.

Our group ordered a wide array of appetizers, including steamed mussels, seared tuna, crab tostadas, and housemade lamb sausage with penne noodles and goat cheese. The latter was my favorite, and offered a surprisingly huge portion with a great combination of flavors. The goat cheese was mellow and creamy, the sausage perfectly spicy, and the whole thing prompted me to make a note to bring all my friends back for happy hour (3-9 p.m. Mondays, 9-6 p.m. Tuesday through Saturday) when this hearty dish is served up for just $6.50.

I also savored a scrumptious winter beet salad with apple slices, pistachios, and oregonzola. I’m a sucker for beets, and this salad has generous portions of everything on the plate. Our group also ordered several flatbreads, something our server described as a house specialty. My favorite was the Hood River Pear, piled high with hazelnuts, rosemary, Riesling honey, oregonzola, and grilled pear. It’s clear someone in the kitchen at Scanlon’s has a great knack for blending flavors.

One unique aspect of the menu is that most items are listed with complete nutritional information. Calories, fat, protein, sodium, fiber – you name it, it’s there. Instead of making you feel guilty, the information actually provides an excellent way to weigh options against one another.

Oregon foodies in the crowd might be familiar with either Pazzo Ristorante in downtown Portland, or with chef Chris Tate. He’s the brainchild behind both the nutritional info and the scrumptious creations on the new Scanlon’s menu. He came out to talk with our group and I seriously considered applauding.

Once the entrées arrived, I used this blog as an excuse to request samples of everyone’s food. The results left me swooning. The petite fillet with wild mushroom demi-glaze was scrumptious and tender. The marinated stuffed pork loin came with tasty sides of sautéed tender greens and grilled yams. 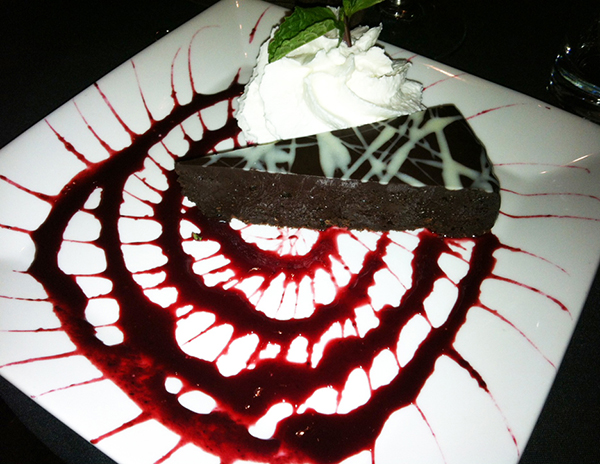 My own pan seared sea scallops left me with no choice but to defend my plate with the aid of a sharp fork and butter knife. The scallops were melt-in-your-mouth tender, and the red curry coconut sauce and nutty brown rice pilaf made the perfect complements.

I’m ashamed to admit I had no room left for dessert, but I managed one brave spoonful of berry sorbet and a longing look at my co-worker’s mudslide cheesecake.

I should mention Scanlon’s offers a particularly nice selection of wines, including several great varieties of Oregon Pinot Noir. The servers were knowledgeable both about the wine list and the menu in general, and it was nice to have their recommendations throughout our meal.

Scanlon’s also makes a great spot for visitors with kids. An on-site “kids club” with air hockey and arts & crafts offers a childcare option for moms and dads craving a romantic evening to themselves. For those who prefer dining with the young’uns, Scanlon’s has a great kids’ menu and a savvy knack for seating families in spots that offer the distraction of big-screen TVs and extra privacy.

Overall, Scanlon’s is definitely worth a shot for dinner, whether you’re a Bend local eager to see what’s new, or a visitor having your first meal there.

I’m glad I gave this one a second chance!