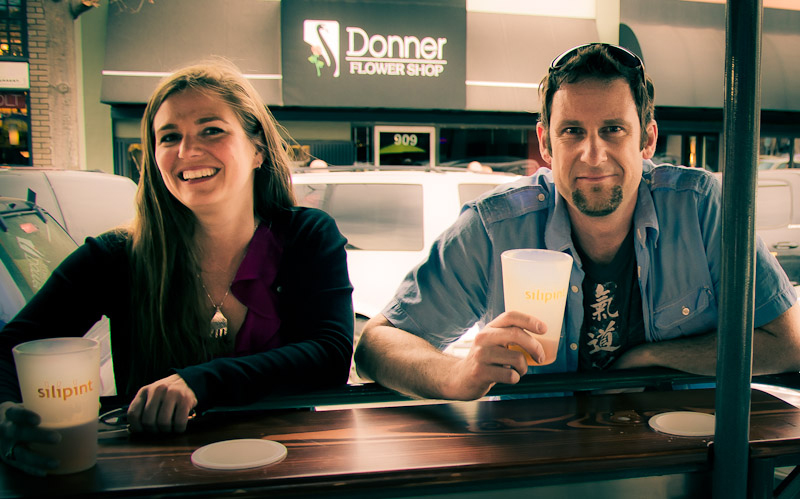 On April 1, 2011, I headed out on one of Cyclepub’s first outings around Bend. I invited a casual acquaintance to join me for what was supposed to be a fun, perfectly platonic evening of peddling and drinking beer on Bend’s cool new bike-bar hybrid.

It was a fun evening, though not as platonic as expected. I’ve been happily dating the aforementioned acquaintance ever since, which is why I feel a bit sentimental whenever I see Cyclepub peddling around with a crew of giddy beer drinkers.

My own Cyclepub experience pales in comparison to that of Kevney Dugan, Visit Bend’s Director of Sales and Sports Development. Kevney holds the world record for the most rides on Cyclepub (a distinction we bestowed upon him in the spirit of Olympic competition). 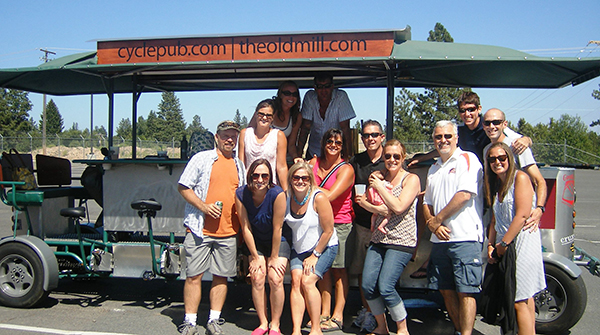 Kevney has ridden with Cyclepub a total of 11 times, beginning just after it launched the spring of 2011, and venturing out most recently this past Monday. Since he’s a veritable font of great tips on Cyclepub outings, I tied him up and forced him to talk  he kindly offered to share some of what he’s learned in all his months of sipping and cycling.

It’s cheaper than you think…

The cost for a two-hour Cyclepub tour with a driver is $300. Sounds a little steep, right? But not the way Kevney and his pals do it. The standard Cyclepub holds 14 riders, and if each person chips in, that’s a little over $21 a person. Not too shabby. And since you’re providing your own beer, the cost is similar to what you’d pay to belly-up to a non-mobile bar and order pints all evening.

But it’s way more fun than a standard pub crawl…

Many of Kevney’s outings have been for birthday parties, going away parties, welcome back parties, and Groundhog Day parties. The way he figures it, Cyclepubbing around the Bend Ale Trail represents the consummate Bend experience, combining bikes, beer, and good times with friends. All tours depart from GoodLife Brewing Company, but riders get to choose where to pedal after that. On a recent outing, Kevney and his friends customized their route to hit Boneyard Brewing and Crux Fermentation Project. One hilly section had the group peddling a little harder than normal, but it was worth it for the chance to see some breweries many members of the party hadn’t visited yet.

About that peddling…how hard is it?

My experience as a short chick who seldom bikes is probably different than 6’1” Kevney who cycles in his sleep, but we both agree that any group of Cyclepubbers will have one or two riders jonesing to pedal hard and turn the whole thing into a competition. You’re best to put those folks up front within the first couple seats on either side of the bar. They’re the ones who’ll do a lot of the heavy peddling, but be sure to choose your friends wisely. You don’t want two buff guys and 12 couch potatoes who plan to pull their feet off the pedals and swill beer while the others do the work.

It wouldn’t be Cyclepub without the beer. Cyclepub riders provide their own drinks, and you’ll need to make sure it’s either canned or in the form of growlers. Either way, choose a bartender beforehand so he or she can keep everyone’s plastic cups filled the whole time. And speaking of growlers, don’t bother getting yours filled before you set out. Instead, bring along a few empty ones so you can fill them at brewery stops along the way. Don’t forget the ice, either—three bags is the perfect amount, and Cyclepub has a big cooler on board to hold everything.

But don’t get cocky with that cooler…

Ever tried to rub your tummy and pat your head? It’s kinda like that when it comes to peddling, drinking beer, and eating food. Don’t go crazy preparing a big array of complicated snacks. Think pretzels and cheese doodles, not bruschetta and lasagna. If you can get your hands on wide-bottomed bowls for snacks—preferably wood or with some sort of rubber bottom—that’s ideal for not sliding off the bar. Don’t forget to pack water or something else to drink when you tire of beer (I know—I didn’t think it was possible either). 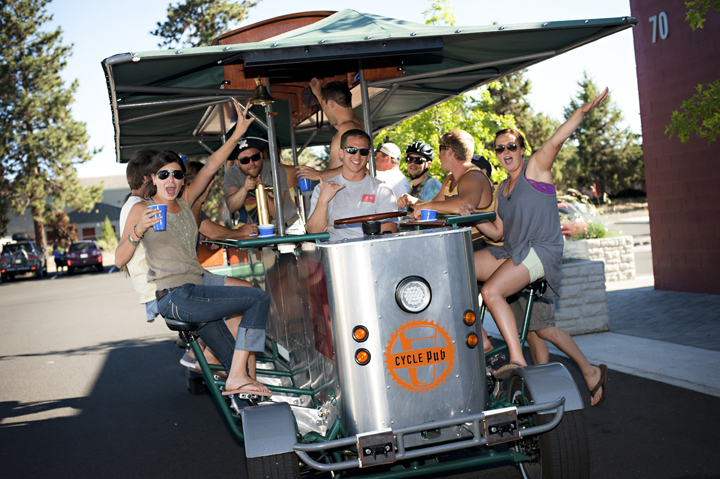 It’s not tough to look like you’re having a great time on Cyclepub!

Cyclepub attracts attention wherever it goes, and pedestrians and motorists are always curious. The more you whoop it up and have the time of your life, the more likely you are to encounter patient drivers and friendly locals who just want to watch you having a ball. One thing that helps is bringing along an iPod with a pre-made playlist of upbeat tunes. Oh, and keep in mind that no bystanders are allowed to jump on board, no matter how much they might plead.

So there you have it—top Cyclepub tips from world record holder Kevney Dugan. Want to book your own Cyclepub adventure? Visit Cyclepub online for pricing, availability, reservations, FAQs, and more.