I was out on the river a couple weeks ago when I overheard two Italian tourists discussing the landscape. 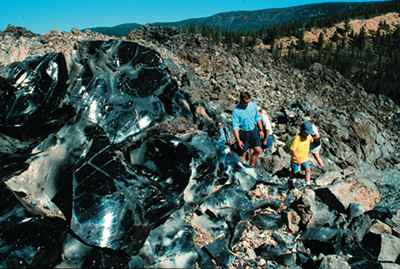 A great way to explore lava flows and obsidian fields is with the Volcano Tour from Wanderlust Tours!

“The brochure says we will see lava flow,” one man declared in heavily-accented English. “But I do not see it flowing into the water like in Hawaii.”

It dawned on me that Bend residents sometimes take it for granted everyone knows what mean when we use certain expressions. As a representative of the tourism industry, I feel it’s my duty to bridge the gap between locals and visitors by offering a handy guide defining the words, phrases, and unique little oddities of Bend, Oregon culture. Behold, I give you my best stab at a Bend glossary.

Lava Flow: Volcanic formations are a unique part of Bend’s landscape, and we’re one of the few towns in the nation with an extinct volcano in the city limits (Pilot Butte State Park –awesome for hiking, but I digress). Though you’ll see many interesting formations created by ancient basalt and rhyolite flows, don’t expect our lava to actually be molten. If it is, devise an evacuation plan.

The Valley: Bend residents use this term to refer to the region on the west side of the Cascade mountain range. The phrase is interchangeable with the words “Portland,” “Salem,” “Eugene,” or any western Oregon city characterized by heavy rain and/or traffic.

Hiking: Also know as “walking,” but with dirt and trees instead of paved sidewalks.

Which Monkey Face would you rather tackle?

Monkey Face: If a Bend resident says this to you, do not immediately retort with, “Butthead.” It’s likely he’s suggesting one of two activities: (1) A visit to Smith Rock State Park where a 350-foot rock pillar by this name offers some of the most breathtaking and difficult climbs in the world. From the right angle, the rock formation resembles the countenance of a primate. (2) A tall, cold pint of Monkey Face Porter from Cascade Lakes Brewing Company along the Bend Ale Trail. This robust and roasty porter has hints of chocolate and black malts, and is perfect after a day on the mountain or river.

Beer: Speaking of beer, it’s important to understand Bend residents use this term almost exclusively to mean “craft beer,” or “microbrews,” such as those produced along the Bend Ale Trail. While locals may be dimly aware of the existence of beers like Budweiser or Coors, you will rarely find anyone consuming one within the city limits.

PPP: This is not a Bend resident’s way of letting you know she needs to use the restroom. It’s an acronym for the Pole, Pedal, Paddle, an annual relay race held each May. The race features six legs including alpine skiing/snowboarding, cross-country skiing, biking, running, canoe/kayaking and sprinting to the finish. Participants do it individually, in pairs, or in teams. The event typically draws hundreds of participants from around the Pacific Northwest and is extremely popular with athletes and armchair warriors alike.

Now that you have some of the basic vocabulary, here are a few tips for conversing with the locals.

We’re having people over for dinner around 6.

Just dress however you want for going out.

Attire yourself in the standard Bend outfit of shorts (summer) or jeans (winter) paired with Keen sandals (summer) Dansko clogs (spring  & fall) or hiking boots (winter), a puffy jacket, and a t-shirt from a local brewery.

I encountered a handful of cars en route from the north end of town to the south end of town, so the journey took me 10 minutes instead of eight.