What's the story behind the flag on the smokestack in the Old Mill District?

What's the story behind the flag on the smokestack in the Old Mill District?

At the Bend Visitor Center, we field a lot of questions about the unique aspects of Bend’s culture and history. “What’s the story behind that?” ask visitors bubbling with curiosity.

Luckily, we’ve got your answers. Mostly. Let’s kick off a new serie

s of posts offering the inside scoop on some of Bend’s quirky trivia. 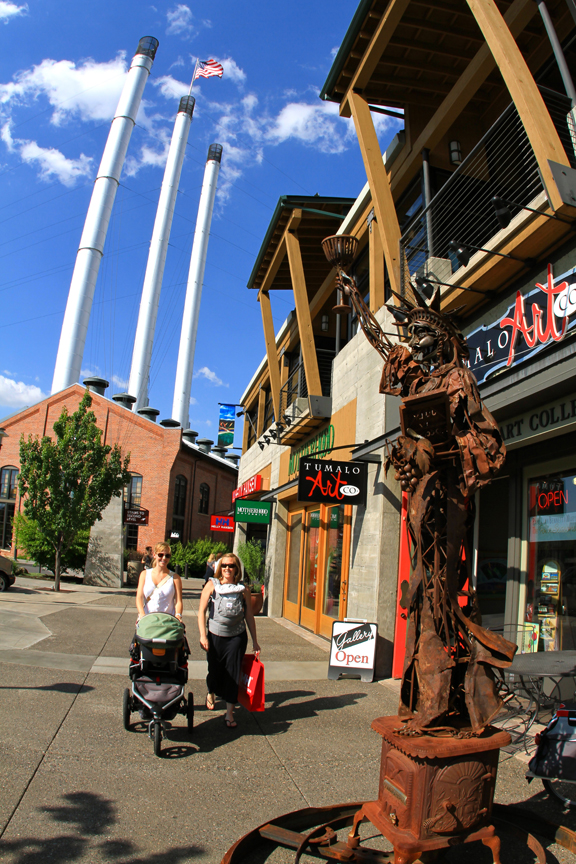 Q: What’s the story behind the flag on the smokestack in the Old Mill District?

A: Though Bend lies nearly 3,000 miles from New York, this Central Oregon town was as grief-stricken as the rest of the nation when the planes hit the World Trade Center on September 11, 2001.

Bill Smith, president of William Smith Properties and key developer of Bend’s Old Mill District recalls looking out his office window one morning right after the tragic events and seeing an American flag flying from one of the 200+ foot smokestacks.

“I thought, ‘holy mackerel, who did that?’” he recalls.

In the wake of the September 11 tragedy, Tim’s family wanted to do something to inspire and unify the community. Since Keeton & King was involved in Old Mill District construction, they knew the layout of the smokestacks and could operate the bosun chair cable system running to the top of each stack.

Tim went to the local National Guard office and handed over his driver’s license in exchange for borrowing a flag. Carrying a steel pipe and some pipe clamps, Tim ascended the tower and attached the flag. The result? An instant Bend landmark.

“It was all about the symbolism and about inspiring people,” he explained.

It did the trick.

In the following months, a 48-foot flagpole was installed on the tower, and the Old Mill established protocol for maintaining the flag. These days, when the flag comes down for routine repairs, the phone in Bill Smith’s office doesn’t stop ringing.

“People want to know why we took it down and offer to help pay to have it put back,” Smith said. “It’s become one of the most recognizable symbols of Bend.”

Got a question for Mind Bend-ers? Email it to tawna at visitbend dot com!