Someone’s talking about us behind our back

Bend in the news

Someone’s talking about us behind our back

It’s true. There’s been a lot of gossip about Bend lately. Fortunately, it’s in reputable publications, as opposed to the National Enquirer (not that I underestimate the PR value of an alien sighting in town. Not that I haven’t seen a few aliens along the Bend Ale Trail, but I digress).

Rather than writing about aliens, major national publications have been buzzing about the things that make Bend unique, appealing, and (dare I say it?) an incredible place to vacation.

Here are a few of my favorite Bend articles from the last few months. The headlines link to each article, and the text below explains why I adore it so:

This piece appeared both in the online version of the publication, and on the front page of the Sunday travel section. I had the pleasure of spending time with the writer while he was here researching the piece, and I adore his characterization of Bend as the city that has it so good, you want to hate it.

I came to this realization standing outside Crux Fermentation Project, the city’s newest brewery. The setting sun painted the sky in brilliant reds, colors like the inside of a ripe blood orange, the horizon sliced by the sharp, snow-covered Three Sisters Mountains in the distance. My hand held a pint of Outcast IPA. Crafted with Australian hops, it’s the ideal to which every other India pale ale aspires. Hoppy and rich and crisp and complex. Perfect. 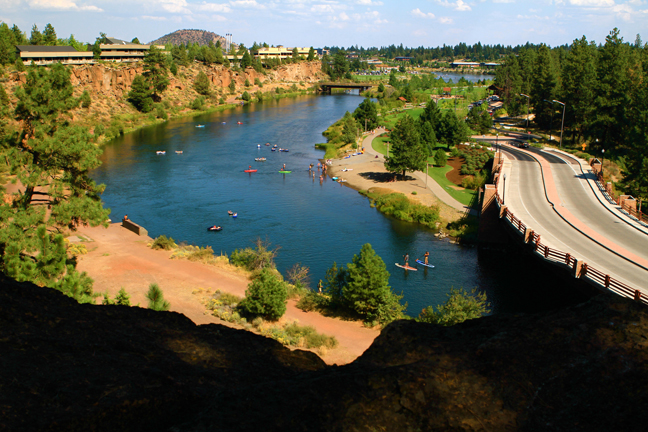 In the 72 hours leading up to this moment, I’d tasted 10 other craft beers. I’d climbed on 20-foot rocks off the Cascade Highway and dined at sunset on seared scallops at the top of Mount Bachelor. I’d felt the gush of air as the continent’s top cyclists raced by, navigating a tight course through Bend’s downtown streets. I’d mountain-biked for 30 miles on the breezy singletrack outside town, flowing through ponderosa pine with the ubiquitous views of the snow-capped Cascade Mountains flitting in and out of sight.

The great thing about major national media stories like this is that they have an amazing shelf-life. Besides being shared thousands of times over in social media platforms like Facebook and Twitter, the article has already appeared in other publications like The Seattle Times and in a special feature by our local television station.

I was part of the application process for Dog Fancy’s competition to find the dog-friendliest city in the nation, so I got to be among the first to learn the good news. At first, I thought no one could possibly be more excited than I was about Bend’s “DogTown USA” honor. But then, congratulatory messages began appearing on reader boards of businesses around town. And then radio stations began gushing about it. Then community members started boasting on Facebook.

At the award ceremony, Visit Bend CEO Doug La Placa noted that Bend has been awarded oodles of “best of” honors, ranging from National Geographic’s declaration that the city is one of the world’s 25 best ski towns, to Outdoor Life magazine naming Bend the country’s best town for sportsmen, to  Mountain Bike Action magazine declaring Bend the top mountain biking town in the nation.

“But I’ve never seen the community as excited about any of those honors as they’ve been about being named the nation’s dog-friendliest town,” he said.

It’s true, and we’re all still thrilled to bits by the award. So is my dog, Bindi, who routinely enjoys dog dates to enjoy the city’s many amenities. 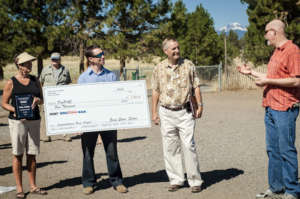 The city of Bend, Ore.—a place where dogs both work and play, ski and swim—claims the DogTown USA title for 2012. Bend beckons dog owners with an abundance of pooch-included sports, activities, and events.

The publisher of Dog Fancy visited Bend in August to award the DogTown USA title (along with a $5,000 donation to Dog PAC and food donations to the Humane Society of Central Oregon). After he returned home, he wrote us an amazing letter about his trip. “You are so deserving of being DogTown USA 2012, the friendliest city in the nation for dogs,” he wrote. “But you would also give Disneyland a run for its money as the happiest place on Earth for people as well.”

So there’s this little publication called the New York Times – maybe you’ve heard of it? Yeah. Suffice it to say, when the largest seven-day newspaper in the U.S. decides to do an article about the Bend Ale Trail, it’s a good reason to lift a glass in celebration.

We did that a few times while the reporter was doing her research, and a few more times after the piece was released. Thinking about it again now, I have a strong urge to walk a few blocks to Silver Moon Brewing Co. to start celebrating again. Anyone care to join me?

In a town of 80,000 people and nine breweries, with at least four more in development, Bend has one of the highest brewery-to-resident ratios in the country, which points toward a thirsty population with discriminating palates, not to mention the two million tourists who visit the mountain town each year. And while Bend, about 175 miles southeast of Portland, is somewhat isolated from main shipping routes, making it an unlikely spot for large-scale brewing, brewers find inspiration in the town’s soft water — beer’s primary ingredient — the result of nearby mountain snowmelt.

We thought the first article was fabulous, but we were in for a surprise a few weeks later when the New York Times did a second article in their financial section discussing the economic impact of beer in Bend. Cheers to that!

Of course, we’ve had tons of other great press coverage about Bend over the years. For a more detailed look, go here or here.