Looking for a good Bloody Mary in Bend Oregon? The Visit Bend team offers a roundup of favorites! 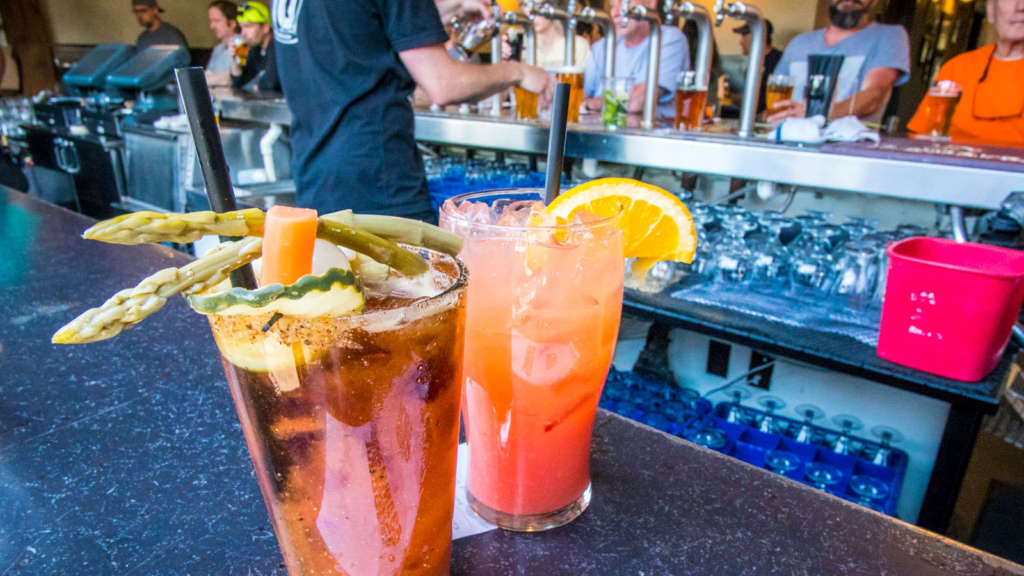 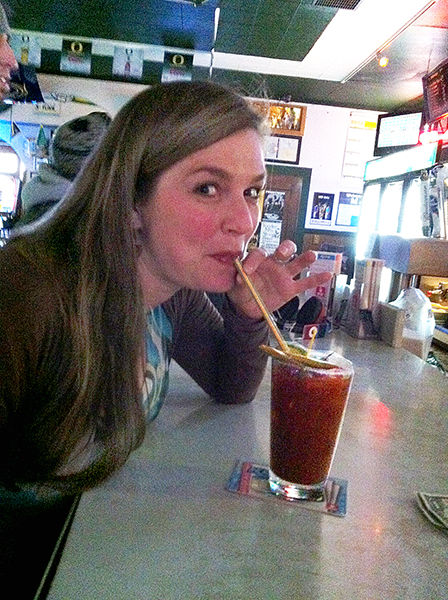 What is it about a good Bloody Mary that makes your toes curl, your taste buds dance, and your whole body glow with satisfaction?

No matter. If you’re a fan of spicy, tomatoey goodness like I am, you’re in for a real treat when you’re in Bend. Though the Visit Bend team includes a number of Bloody Mary fans, we don’t all agree on the best spot to procure one. Below are some wholehearted endorsements from our staff.

Tawna Fenske (Communications & PR Manager and author of this blog)

I’ll admit I’m a bit of a purist when it comes to Bloody Marys. I like them basic, spicy, and served in bars with dim lighting, cheap beer, and menus that don’t include words like “charcuterie” or “demi-glace.”

I mean it as a compliment when I refer to M&J’s Tavern on Greenwood Avenue as a dive bar. There’s nothing froofy about their Bloody Mary. They start with Demitri’s Bloody Mary mix and add a blend of horseradish, Tabasco, A-1, and a garnish of pickled green beans and olives for just $5. It’s served in a tall glass with a salted rim at a huge Formica bar you’ll share with a colorful array of blue-collar locals.

If I crave more variety but still want the ambiance of a no-frills watering hole, I head to Cascade West Grub & Alehouse on SW Century Drive. On Sundays from 10 a.m. to 2 p.m. they pull out all the stops with a bloody mary bar offering six varieties of tomato juice, horseradish, wasabi, Tabasco, bacon, and every conceivable veggie ranging from peppers to avocado to celery to asparagus. They set the whole thing up on a pool table and let guests go crazy making their own special concoction. The bartender adds the liquor, and the whole thing is just $5 for basic well-vodka or $6 for Crater Lake Pepper Vodka from Bendistillery.

Lest you think I’m incapable of appreciating a more highbrow Bloody Mary, I’ll give a shoot-out to the Thai Bloody Mary at 900 Wall. It’s made with house-infused pepper vodka, thai chili, lime, cilantro, Clamato, and sesame seed spice blend for $9.50. Cheers!

Beautiful Bloody at The Vic!

The Victorian Café received votes from several members of the Visit Bend team, and here’s what Kevney had to say: “The Vic’s Bloody Mary has the perfect amount of heat and spice, but it’s not over the top. Plus it has a lot of veggies, which helps me justify drinking before noon. It has cured more than a couple headaches for me, so they must be doing something right.” 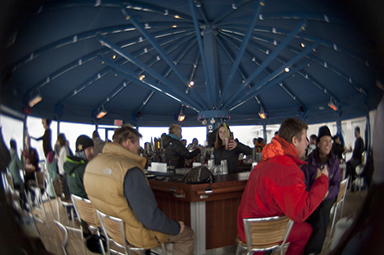 Inside the Sun Bar at Mt. Bachelor.

To score Valerie’s favorite Bloody Mary, you’ll need to venture up to Mt. Bachelor where you’ll enjoy their Mazama Spicy Bloody Mary in the Sun Bar. “It has the perfect celery salt rim and garnishes,” she noted. “The whole thing is enhanced by the spicy, local Crater Lake vodka and the views.”

I’ll second her vote on that one, since I have a soft spot for pickled asparagus and a celery stalk that’s more of a small tree than a dainty sliver. Bottoms up!

Is there anything better than bacon? Not much, in our CEO’s opinion. Doug is a big fan of the Bakon Bloody Mary at Brother Jon’s Public House. This treat is made with Bakon brand bacon-flavored vodka, their special house-made Bloody Mary mix, a dash of Lea & Perrins, a dash of Tabasco, a bacon salt rim, a slice of bacon, and lots of veggies. 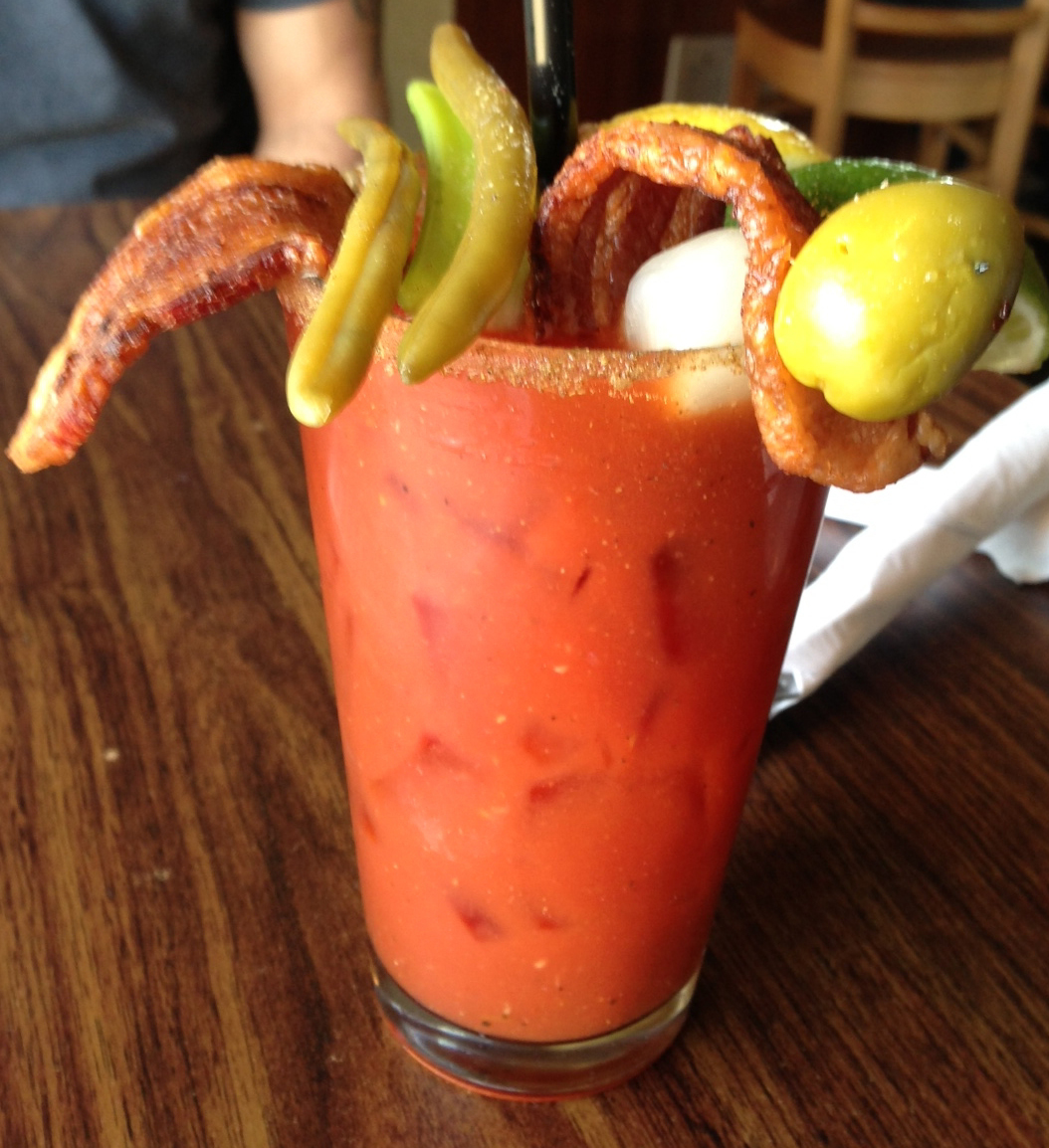 The Bakon Bloody at Brother Jon’s

When we asked him to go out and order one so he could take a picture, he obliged without a moment’s hesitation. “I had two,” he noted when he emailed the photo. “Don’t judge.”

We wouldn’t dream of it.

Another noteworthy Bloody Mary in Doug’s opinion is the one from D&D Bar and Grill in Downtown Bend. Their proprietary house-made mix is legendary among locals, and bartenders are generous with the vodka.

Chalk up another vote for The Vic. “I’m not a big Bloody Mary drinker (mostly because I don’t get out that often), but I really like the ones from Victorian Café,” Lisa shared. “I like Victorian Café Boody Marys because of the yummy spices and olives used. Plus, because it’s so filling, I only eat half my breakfast and save the rest for the next day!”

That sounds like pretty solid reasoning. And with dozens of creative Eggs Benedict offerings on the menu, The Vic makes the perfect weekend brunch for Bloody Mary fans hankering for a good meal to wash down the beverage.

Not a Bloody Mary enthusiast herself, Lynnette still took part in our poll. “I’m not a Bloody Mary fan so I asked a few of my girlfriends who drink them frequently (even hiking the Metolius a few weeks ago, they brought along Bloodys in a Silipint).” Lynnette’s pal, Mieke Pistey enjoys a Bloody Mary (plus a little something extra – a manmosa) at The Vic.

Lynnette’s pals gave a few more shout-outs for The Vic. “It’s the perfect blend of spices, with the added bonus that they come in varying sizes, and with the option to add a skewer!” noted pal Sarah Kellogg, who also listed Brother Jon’s as a very close runner-up.

Lynnette’s other pal, Mieke Pistey, also had praise for Bloody Marys at The Victorian Café, offering up a photo of herself with what she calls her Proud Mary. “My favorite bloody made with Bendistillery pepper vodka, double the size, and it comes with a yummy skewer of cheese, prawn, sausage, olives and a breadstick on the side! Yummmm!”

So that’s it for our Bloody Mary roundup in Bend. Got a favorite that’s not on the list? Please share!