No, Big Eddy wasn’t a lumberjack (and other history of whitewater rafting in Bend) 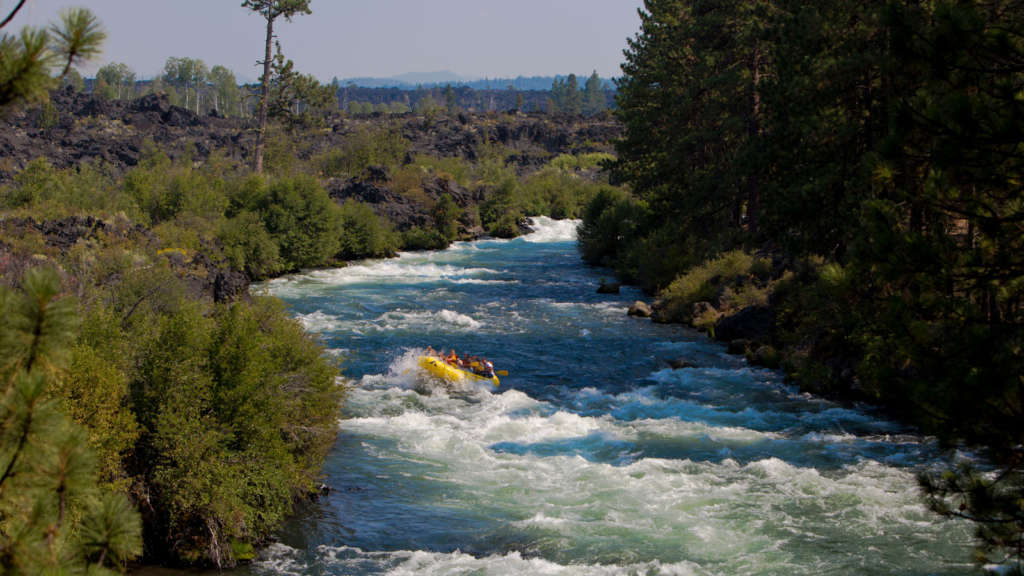 Welcome to your sixth edition of Mind Bend-ers, a special feature offering you the inside scoop on quirky Bend history and offbeat trivia.

Whitewater rafting is on the bucket list for many Bend visitors. This goal will inevitably land you on the banks of the Deschutes River where you’ll look down at a mass of churning whitewater and think, Holy cow!   I just peed myself.   That looks fun!

The water feature you’re staring at is a series of class III rapids called Big Eddy. Representing the only intermediate whitewater on the Upper Deschutes, Big Eddy is located two miles below Dillon Falls and a bit above Lava Island Falls.

But who was Eddy, and what made him so special?

Turns out Eddy wasn’t a who so much as a what.

The term eddy refers to a section of calm water behind a rock or an obstruction. In other words, a mellow spot in the current.

Kinda the opposite of the Big Eddy Run.

Early settlers would shoulder their muskets, pack up their fishing lines, and post to Facebook   send a text message   shout to their buddies, “Let’s meet at Big Eddy to shoot a bear for supper.”

Apparently that calm spot in the river was a pretty happenin’ place for hunting and fishing.

In the mid-1970s, people began eyeing the area for something else. They cast their eyes downriver, looked at the churning whitewater, and decided to plunge through it in a raft.

It didn’t go so hot at first.

“In the early days, we used to get out, portage halfway down, and put in at the bottom,” Dennis explained. “The equipment and guide skill level wasn’t what it is today, and the rafts were just shy of military-surplus.”

Sun Country’s first test run through Big Eddy in the late ‘70s—long before the era of sturdy, self-bailing rafts—resulted in a bow-to-stern rip in the bottom of the boat, and a vow to hold off on running that section of river until better equipment was available. That happened in the mid-80s, and they’ve been running Big Eddy ever since.

Today, Sun Country Tours takes thousands of happy rafters through the Big Eddy Run each year. They’re proud to have top-of-the-line rafts, safety equipment, and guides with advanced whitewater experience and CPR and First Aid training, and they’ve never had a life-threatening injury on any of their trips.

And despite its somewhat scary appearances, Big Eddy Thriller is actually a very safe outing for families, kids over six, and even fraidy-cats who’ve never rafted in their life. To book your Big Eddy whitewater adventure with Sun Country Tours, visit them online or call 1800-883-8842.

Just don’t shoot any bears from the boat. That’s kinda not done anymore.