Whether you’re a hardcore film buff (my fiancé) or someone who typically falls asleep during movies (guilty as charged) there’s something magical about the BendFilm Festival each October.

Maybe it’s the unique energy of all those independent film fans gathered in one place, or maybe it’s the excitement of chatting with real, live filmmakers about their creations.

Heck, maybe it’s the parties. I won’t rule that out.

Bottom line, there are tons of great reasons to make sure you buy passes for the 2013 BendFilm Festival October 10-13. Here are five of them. 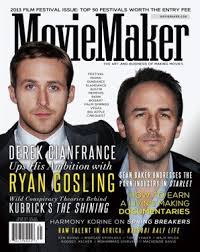 You know how your mama taught you not to care what other people say about you? Ignore that, at least if you’re BendFilm. See, they’ve been racking up a lot of great buzz lately in places that matter. In April, MovieMaker magazine named BendFilm one of the top 50 film festivals in the world. It was the only film festival chosen in the Pacific Northwest, so it’s kind of a big deal. The judging pool included more than 5,000 film festivals around the world, and evaluated factors including history, prizes, judging panel, audience, subsequent success of alumni, and submission fees.

The buzz doesn’t stop there, though. Earlier this week, The Huffington Post did a fabulous interview with BendFilm director Orit Schwartz. It’s a pretty awesome piece not only because she shares a lot of cool insights about BendFilm, but because she speaks glowingly about Bend itself. There have also been some pretty cool mentions in the September issue of Horizons (the Alaska Airlines in-flight magazine) and this cool article at Indiewire. Sometimes it’s nice to have everyone talking about you, eh? 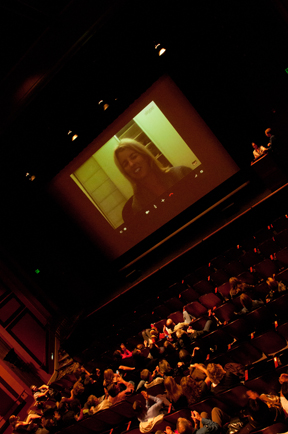 Crowds gather at the Tower Theater during BendFilm.

As if BendFilm weren’t exciting enough, this is the festival’s tenth year of life. What better way to commemorate the occasion than skimming the schedule and ponying up a few bucks to buy tickets to a few films that pique your interest. Better yet, buy an event pass for the whole thing. A milestone like this only happens once, and you deserve to celebrate in style. It’s worth noting that festival winners will be screened on Sunday, so save some of your film-going energy for the final day. You’ll also want to save room on your agenda for one of the panel discussions, which is always a highlight for film buffs.

Do you dig being one of the first people to see a hot new indy pic? This year’s BendFilm Festival is your personal playground. Out of 82 official selections, a whopping 72 are premiers. There are nine world/US premieres, 15 West Coast premiers, 38 Pacific Northwest premiers, and 10 Oregon premieres. That’s a whole lotta premiere action. Go here to check out the schedule.

I know, I know…it’s supposed to be about the value of independent cinema and the artistry of it all. Still, I feel I should confess the parties are usually my favorite part of BendFilm. This year’s lineup of festivities seems particularly impressive. The opening night kickoff party at the Oxford Hotel promises an abundance of hors d’oeuvres, cocktails, wine, beer, and shoulder-rubbing with filmmakers and supporters. That starts at 7:30 p.m. October 10, and you’ll need to buy tickets here.

Another fabulous party takes place that same evening immediately following the opening night reception. You won’t want to miss X Party: The Party of the Decade! From 9:30-midnight, stop by the BendVisitorCenter on the corner of Lava & Oregon, pay $10 at the door, and prepare to dance yourself dizzy. There will be music by Flip-Flop Sounds, no-host libations from Twist Cocktail Catering Co., and a dance vibe so fabulous you won’t be able to stand it. 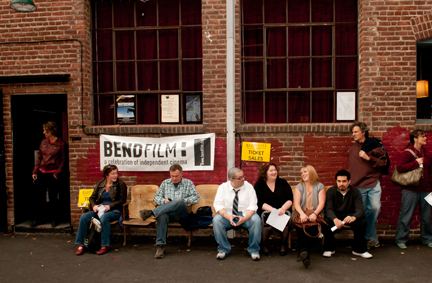 Waiting in line outside the Tin Pan Theater.

Not that you need an excuse, but here it is. There’s something cool about strolling through Downtown Bend this time of year as you make your way from one film venue to the next. You’re snuggled in your colorful new sweater as you kick your boots through piles of leaves and smile at fellow film-goers wearing the telltale pass around their necks. It’s a great opportunity to browse downtown boutiques for some souvenir shopping or to grab a bite to eat in one of Bend’s fabulous restaurants. Later in the evening, grab a beer at McMenamins and cozy up by the fire as you chat up filmmakers and fans. It’s the ultimate autumn event in Bend, so savor it.