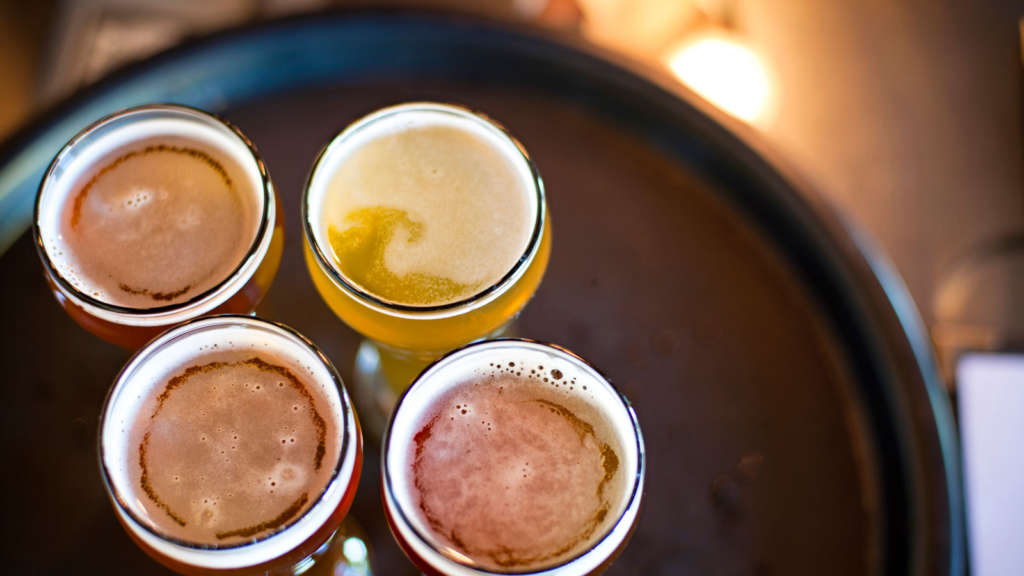 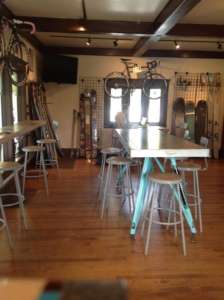 You know Bend is awash in amazing craft beer, and there’s a good chance you’ve clutched your Bend Ale Trail atlas while wandering from brewery to brewery gathering stamps to earn prizes.

But if it’s craft beer you’re craving, you don’t have to stick with breweries and bars to get your fix. Here are five not-so-typical places you can grab a cold, frosty beer made right here in Bend.

Would you like a beer with that mountain bike?

It might seem odd to order a beer at the same place you buy tires for your road bike, but believe it or not, Bend has two spots you can do that. Hub Cyclery is Bend’s newest bike shop, offering bikes, parts, accessories, repairs, and of course—beer! Come in for a tune-up or a little shopping, and belly up to the bar for a cold draft of Crux beer. There’s no charge for customers of legal drinking age who are there to shop or await some repairs. 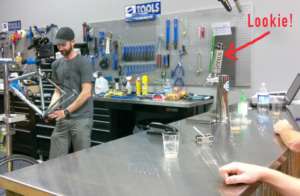 Get free Crux beer while you shop for bikes at Hub Cyclery!

Hub Cyclery isn’t the only game in town combining bikes and beer. Just a couple blocks away, Crow’s Feet Commons offers a full-service custom bike and ski community, café, and tap room all under one roof. Order a local brew to enjoy while you browse their impressive selection of bikes and winter gear. They sell beer from several local sources, including Deschutes, Boneyard, Good Life, Ale Apothacary, and Three Creeks, in addition to beer from outside Central Oregon. The café offers a hearty selection of nibbles and coffee drinks for those who require something beyond beer, but why would you?

There’s nothing like the simple pleasure of curling up with a pint of craft beer and a good flick on the big screen. Bend offers not one, not two, but THREE fabulous movie theaters that let you enjoy a brew with your meal. 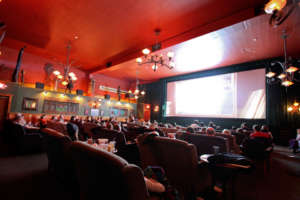 Cozy up on the couch at McMenamins to enjoy a movie with a pint of your favorite brew.

First up is Tin Pan Theater, a cozy little downtown theater showing a wide range of indy films and older movies in their small but quirky venue. Pick your spot among the old-fashioned theater seats, then buy a pint of local craft brew and an order of popcorn to savor with the show.

If you prefer to sprawl on a sofa to enjoy craft beer and a flick, snag a comfy seat at McMenamins Old Saint Francis. Order a full meal to wash down with a pint of Ruby, or just nosh on an order of spicy tots to go with a glass of Terminator. Movies range from second-run flicks to indie films, and you can even catch a kiddie movie earlier in the day. 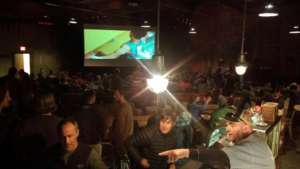 Bend’s newest addition to the lineup of theaters offering beer is Volcanic Theatre Pub. You’ll not only find an impressive lineup of movies and Bend craft beer, but some live music and theater. The tap lists are impressive here, too, and you can opt for a cozy chair or sofa near the front, or a bistro table near the bar.

Get sweaty with your suds

It might seem odd to head to the gym for a pint of IPA, and for the record, I’m not actually suggesting you hop on the treadmill with a Hydro Flask of Hop Venom. But Scanlon’s restaurant at the Athletic Club of Bend has one of the most impressive happy hours in town, and their beer selection always includes tasty local craft beer. Pick a spot near the bar where you can watch sweaty club members en route from a vigorous workout. Then laugh, lift your pint high, and have another round of house-made lamb sausage over penne noodles (my personal favorite!)

For more than ten years, Bond Street Barber Shop has been a beacon of guy-ness in Downtown Bend. That’s not to say ladies can’t enjoy a pint of ale while getting their bangs trimmed, but this place definitely caters to a more testosterone-fueled crowd. Customers get a complimentary glass of 10 Barrel beer while enjoying haircut for $21 or a hot shave for $20. They also offer kids’ cuts for $18, though I think we can safely assume your toddler won’t be offered an IPA. If beer isn’t your thing (pardon me while I shudder at the thought) they also offer Tequila Tuesdays and Bloody Mary Saturdays.

A gas station, a car wash, and a butcher shop

Sounds like the setup for a weird riddle inquiring what those three things have in common. Give up? All three are locations of some of Bend’s growler fill stations.

The Growler Guys have two locations in Bend, and both are housed in gas stations. The Eastside spot in particular has an impressive bar-like setup where folks can gather for a few yummy samples before filling a growler with tasty craft beer to take home. Both locations have more than 30 taps to choose from, so you’ll have quite a selection to pick from. 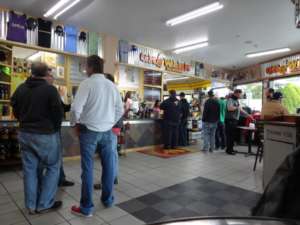 Get a few gallons of gas and a growler fill at the Growler Guys’ Eastside or Westside locations.

Another oddly situated growler fill station is Gorilla Growlers in Northeast Bend. Tucked in the same complex as the Empire Car Wash, it’s a great spot to get suds for yourself and your vehicle. They have 29 beers on tap, and allow you to sample a variety before you make your final selection. Bonus: free use of the vacuums when you get your car washed, so you can take care of three chores at once when you fill your growler here.

Not to be outdone as an unusual locale for scoring craft beer, Growler Phil’s shares space with Primal Cuts Meat Market. This fabulous little butcher shop is known for unique local specialties like bison, ostrich, duck, pheasant, rabbit, and elk, and the 29 taps at Growler Phil’s are changed out daily. Grab a few samples, pick your favorite craft beer to take home, then turn around and take five steps to the meat counter to stock up on local meats and cheeses. Voila! You’ve got dinner to barbecue at your Bend vacation rental.

6 things to look forward to as we fall back

Does anyone else keep muttering curses since Daylight...
Read Post

The best things to do in Bend for November

There’s frost on the grass, some newly-naked trees, and fresh, frosty caps on our mountains. Must be November in Bend! More than any other month,...
Read Post
‌