Welcome to your eighth edition of Mind Bend-ers, a special blog feature offering you the inside scoop on quirky Bend history and offbeat trivia. 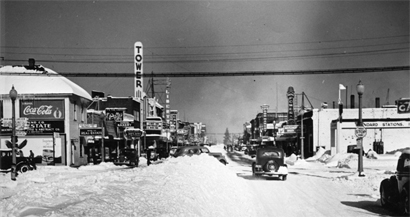 The Tower Theatre when it was brand spankin’ new in 1940. Check out all the snow on Wall Street!

If you’ve passed through Downtown Bend, odds are good you’ve spotted the bright marquis of the Tower Theatre. Maybe you’ve been lucky enough to catch a concert or movie there, or perhaps you’ve walked by late at night and noticed a light still glowing inside long after everyone’s gone home when only ghosts are creeping about, lurking in shadows and trailing their long, cold fingers over—

Wait, let’s not get ahead of ourselves.

The Tower Theatre was originally built in 1940, and played host to a variety of fashion shows, amateur hours, and film screenings. Things were boss through the ‘50s, groovy in the ‘60s, far out in the ‘70s, and even pretty tubular though the ‘80s. But the place fell into disrepair in the ‘90s, prompting a spate of “save the theatre” fund raisers we suspect did not involve Sally Struthers telethons. 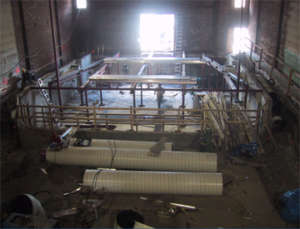 The renovation in the early 2000s was no small task.

A total reconstruction kicked off in the early 2000s, and the Tower Theatre reopened in 2004 as a spiffy art deco live performance theatre that’s hosted everything from weddings to film festivals to top-notch performers like Brandi Carlile (who, for the record, is not a ghost).

Okay, so about that light—the one that’s still blazing in the theatre at 2 a.m. What gives?

According to Executive Director Ray Solley, theatrical tradition calls for something called a “ghost light” to illuminate the inside of a theatre 24/7. “Generally, it’s a stand with a bare light bulb—a bit like a floor lamp without a lampshade.”

At the Tower Theatre, it takes the form of two florescent lights in the rafters that shine down on the front of the stage and the first few rows. Why?

“Many theatres have some history of ghost sightings or myths about ghosts,” Ray explained. “The ghost light can either keep them away or give them light to see by.”

We’ll go with the second explanation, since it sounds more welcoming. And according to local scuttlebutt, ghosts have felt welcome at the Tower Theatre from time to time, with one person spotting a figure in the Romeo & Juliet window near the stage (a figure that vanished quickly, followed by the slamming of a back door). On another occasion, some performers rehearsing late at night spotted a couple seated in the back row. When someone hopped down off the stage to investigate, the spooky pair vanished. 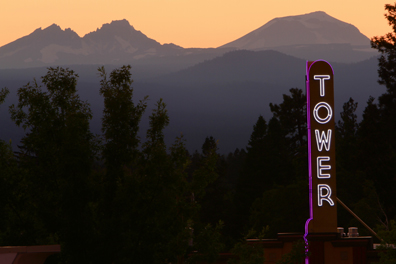 Even without the ghosts, this looks a little spooky to us. Thank you Pete Alport for the pic!

Anyone else have goosebumps?

Whether you believe in ghosts or not, we guarantee you’ll get a few pleasant goosebumps from some of the stellar performances liked up at the Tower Theatre in the coming year. Check out their calendar of events and start planning your special night on the town now.

They’ll leave the light on for you. Or for the ghosts. Whatever.