8 frequently mispronounced Bend words (and how to say them right)

You know that squirmy feeling you get when you stare at an unfamiliar word? You take a deep breath and think, “I’m pretty sure I’m going to say this wrong.”

When you plan a Bend vacation for the first time, odds are good you’ll encounter a handful of words you’ve never tried to pronounce before. To help you out, we’ve assembled a few of the most commonly mispronounced ones, along with a handy key to untying your tongue and nailing the pronunciation on your first try.

While a lot of vacationers trek to Bend from Portland, Eugene, or Salem, there’s a good percentage setting foot in our fair state for the first time. 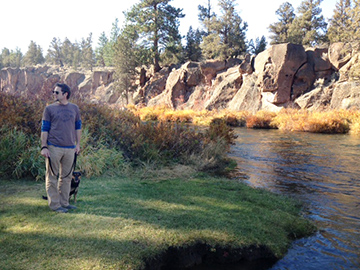 Scenes from scenic Tumalo State Park on the bank of the Deschutes River.

Nothing generates a chorus of boos quicker than a concert performer announcing he’s glad to be here in “Orey-gone,” so it’s important to get this one right. Pronounce Oregon with a softer inflection on both syllables and the emphasis on the first one. It should come out sounding something like “OREH-gun.”

From Tumalo Falls to Tumalo State Park to Tumalo Creek Kayak and Canoe, you’ll see this word attached to a lot of Bend landmarks. The exact origin is debated occasionally among historians, but it means either “wild plum” or “cold water,” depending on your preferred translation of the Klamath dialect. This is another instance where visitors often give the word a harsher sound than it actually has. To say Tumalo correctly, think of those chalky tablets you chew when you have heartburn, then say “TUM-ah-low.” 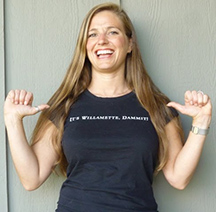 Though Bend is a good three hours from the lush Willamette Valley, you’ll still stumble upon the occasional business with Willamette in the title. Stumble is a good word there, since visitors often trip over the correct pronunciation.

For this one, I defer to the wisdom of Willamette Valley Vineyards where they sell t-shirts that read, “It’s Willamette, dammit.” In other words, the “a” sounds like the one in “cat” and the last syllable should sound like the thing a baseball player wears on his hand. Say it like “Wil-AAH-mit.”

The mighty river that flows through the center of Bend has spawned the name of everything from streets to events to the city’s iconic Deschutes Brewery (the fifth largest craft brewery in the nation). Whether you’re sipping a Black Butte Porter or heading out for a float on the Deschutes River, make sure you’re saying it like this: “Deh-SHOOTS.”

The crystal clear waters of Paulina Lake. Just make sure you pronounce it correctly!

You’ll see this one a lot if you’re visiting Newberry National Volcanic Monument and enjoying a swim in Paulina Lake, a hike to Paulina Peak, or an afternoon of peddling and splashing on the Paulina Plunge. Yes, it’s spelled just like the woman’s name, but it’s actually a reference to the fearless Northern Paiute leader, Chief Paulina. The middle syllable should rhyme with “high,” or “eye,” so pronounce it like this: “Pol-EYE-nuh.”

A visit to the breathtaking Metolius River should be high on your list of must-do activities in Bend, whether you’re taking a road cycling trip there with Wanderlust Tours, or enjoying a quick hike to see where the river appears by magic from beneath a mossy hillside. When you say the word, it should sound like “Muh-TOE-lee-us.” 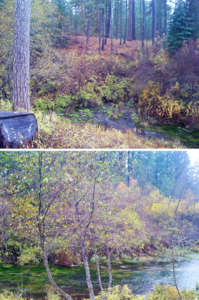 The Metolius River where it emerges from under a mossy hillside.

Though this chain of Oregon-based brewpubs has locations all over Oregon, and I’ve visited no fewer than a dozen of them, I’ll confess I sometimes still stumble over the pronunciation of McMenamins. When you visit their Old Saint Francis School location in Bend for a tasty pint of Ruby, make sure to tell your server how delighted you are to be sipping a tasty brew at “MICK-mena-minz.”

This tiny town just a little north of Redmond (pronounced “RED-mund,” in case you’re wondering) is another tongue-twister for some visitors. You’ll drive through it on your way to Smith Rock State Park, so don’t be fooled into pronouncing the last syllable like something you’d give a dog to chew. The correct pronunciation should be “Terra-BON.”

While I’m pretty sure that covers most of our commonly mispronounced words in Bend and Central Oregon, feel free to comment with any I might’ve missed. Oh, and just to help you out, here’s a short video of me uttering every one of those words in something that almost passes for normal-sounding conversation. You’re welcome.