Want to get engaged in Bend? 5 couples share how they did it!

As I shared in last week’s post, I just got married September 6. While I’m with you all in spirit, I have to confess I’m currently on a beach in Belize sipping fruity drinks and feeling a little nostalgic I’m missing my favorite time of year in Bend.

But in the spirit of passing along some giddy romantic vibes, we recently asked folks on Visit Bend’s Facebook page to share stories of marriage proposals that took place in Bend and Central Oregon. After all, the town named one of America’s Most Romantic Cities by Livability.com should have some great tales of people getting down on one knee to pledge eternal devotion.

Here’s what we rounded up for you: 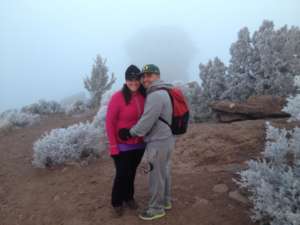 Greg and Kristen celebrate their engagement at Smith Rock.

“I proposed to my fiancée back in January,” Greg shared on Visit Bend’s Facebook page. “I surprised her by telling her I wanted to do a hike up to Misery Ridge [at Smith Rock State Park] to watch the sunrise. Little did she know our closest friends and family had hiked up at 4 a.m. to hide and take pictures, carrying celebration champagne to the top. It worked out perfectly, and I proposed at the bench on the lookout on top of Misery Ridge. We watched the sunrise, even though it was freezing fog.”

The couple is planning a June wedding in Bend.

Misty and Novin (a July proposal at Tumalo Falls) 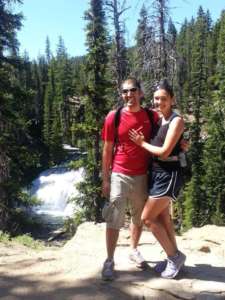 Misty and Novin get engaged at Tumalo Falls.

“Bend is THE PLACE to get engaged!” Misty shared on Visit Bend’s Facebook page. “My fiancé proposed on the Fourth of July last year at Tumalo Falls. We were standing on this rock admiring the falls, and he was looking nervous and awkwardly fumbling with his pocket. He started mumbling some nice words I can’t remember, and he tried to take the ring out of the box, but I started yelling at him to stop because I had a bad feeling he would drop the ring into the water. Haha!

“We moved back onto the trail so he could safely put the ring on my finger. We spent the holiday weekend with family in Sunriver and celebrated the rest of the weekend at several awesome spots including Sunriver Brewing Company and Ariana Restaurant. We’re getting married in September at Eagle Crest Resort. We just love Central Oregon that much!” 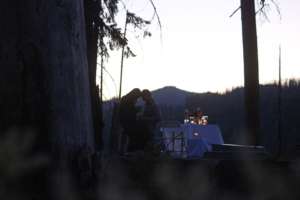 Jacob and Rebecca (a July proposal at Suttle Lake)

“Rebecca had just landed at PDX airport after climbing Mt. Kilimanjaro,” Jacob shared on Visit Bend’s Facebook page. “I had

given her a letter for every day she was gone and then this big surprise on the way home.”

Jacob really wanted to surprise her, so he pulled off the road next to Suttle Lake on the way back to their hometown in Bend, Oregon, right at sunset. Some good friends helped him set up a candlelit dinner scene with Rebecca’s favorite dessert and music by the side of the lake.

After a few minutes of slow dancing, he spun her onto his knee and asked if she’d spend the rest of her life with him.

She said yes (of course!) and the couple is set to wed in early October.

Larry and Lisa* (a November proposal at Mt. Bachelor) 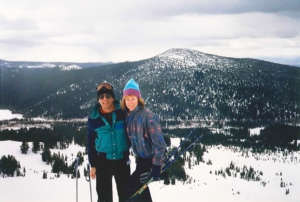 Lisa and Larry moments after they got engaged at Mt. Bachelor more than 27 years ago!

“Larry was working at the Olympia Brewery at the time, when we decided to spend a long weekend in Bend,” Lisa shared. “We had been dating for a while, and both of us knew we had found our soulmates. It was Sadie Hawkins Day, and I was getting increasingly chicken about proposing while skiing at Mt. Bachelor.  Finally, Larry couldn’t wait any longer and while we were taking in the view, he popped the question.  I was so surprised, he had to ask twice! (Larry really likes to tell this part of the story).  This was 27 wonderful years, two kids, and two breweries ago!

* Lisa Sidor is the Visitor Information Specialist for Visit Bend, and Larry Sidor is the owner/brewer at Crux Fermentation Project.

“My now fiancé, Geoff, my dog Yogi, and I visited Smith Rock for the first time in December 2013,” Becky shared in an email. “We fell in love with it so much that we hiked there twice in one weekend. Although only visiting there twice, I claimed that was my favorite place in all of Oregon and the entire world. I made plans with a running guide to trail run there as well in May. 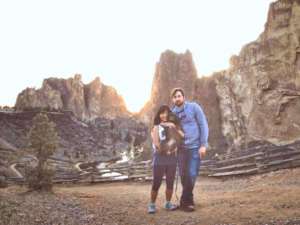 Geof and Becky got engaged at Smith Rock last spring.

“On Saturday, March 22, 2014, Geoff, my dog Yogi, and I drove all the way to Terrebonne from Portland, anticipating a great day of hiking. It was 60 degrees, sunny, in my favorite place in the world.

“We hiked the Misery Ridge trail, and once we got to the summit, he took me to an area that was secluded from the hikers.  He started taking photos of me, and I didn’t know why. He kept saying I looked really beautiful and kept snapping away. After soaking in the beautiful views of Smith Rock, I jokingly mentioned “this would have been the perfect place to propose”. He laughed and said “eventually!” We stayed for a bit as he took photos of me, then told me to lead us back to the trail. Then he said, “Becky?” I thought he was going to tell me a joke, and I said, “WHAT?” Then I saw him on one knee, with the ring out, and he asked “Will you marry me?”

“I was in so much shock, I didn’t expect a proposal. My dog, Yogi, was our only witness! I was so happy and the first words that immediately came out of my mouth were, “what the hell?!” Because I was so surprised. I then started crying, kissed him, and said “yes!” It was the perfect moment, on Smith Rock, on one of the most gorgeous days! Or maybe it’s always gorgeous. We spent the entire hike smiling, kissing, and enjoying the moment.”