8 things that haven’t changed much at all in Bend 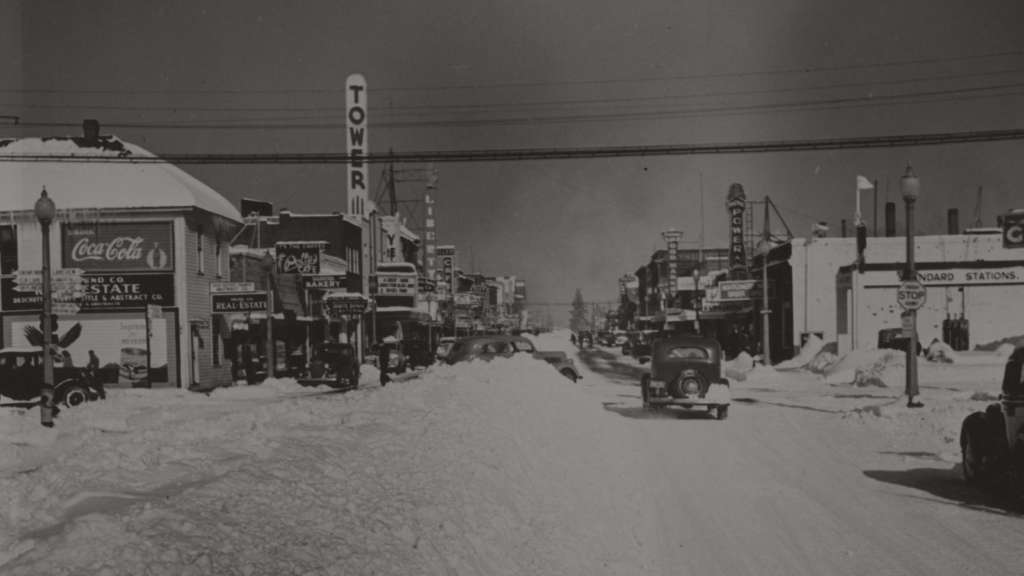 So my grandma died yesterday. 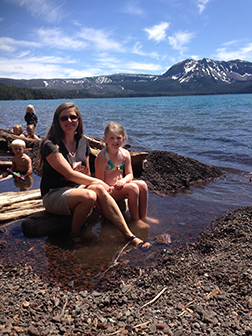 Blogger Tawna hangs out with her stepdaughter on the banks of Paulina Lake in the Newberry National Volcanic Monument.

I know I’m usually upbeat on this blog, so I promise I’ll still lace this post with a few doses of irreverent humor.

I’ve been feeling nostalgic about my childhood summers in Central Oregon. I’m a fourth-generation Oregonian who grew up in Salem, but for much of my childhood, my grandparents lived in Central Oregon raising racehorses. I spent a lot of time in Bend as a kid, so I’ve been thinking about my memories of the area in the late ‘70s and early ‘80s.

While you can’t throw a rock these days without hitting someone in the midst of remarking how Bend has changed in recent years, here are eight things that are still basically the same as when I was an awkwardly-coiffed first grader learning to skip rocks in the Deschutes River in 1981.

Scope out some really old rocks

While Newberry National Volcanic Monument wasn’t actually named a national monument until 1990, the features that make it up have been around since way before you and I were twinkles in our grandparents’ eyes. The area includes nearly 50,000 acres of lakes, waterfalls, obsidian fields, lava flows, and amazing, ancient geologic features you won’t find anywhere else in the state.

As a kid, I remember being fascinated by the glittery obsidian and the itty-bitty chipmunks skittering everywhere. I could pick up a bumpy, porous rock off the ground and know it was once lava—lava!!—and find myself endlessly enthralled by that idea. My own stepkids expressed much of the same delight when we enjoyed a two-day excursion out there last summer. 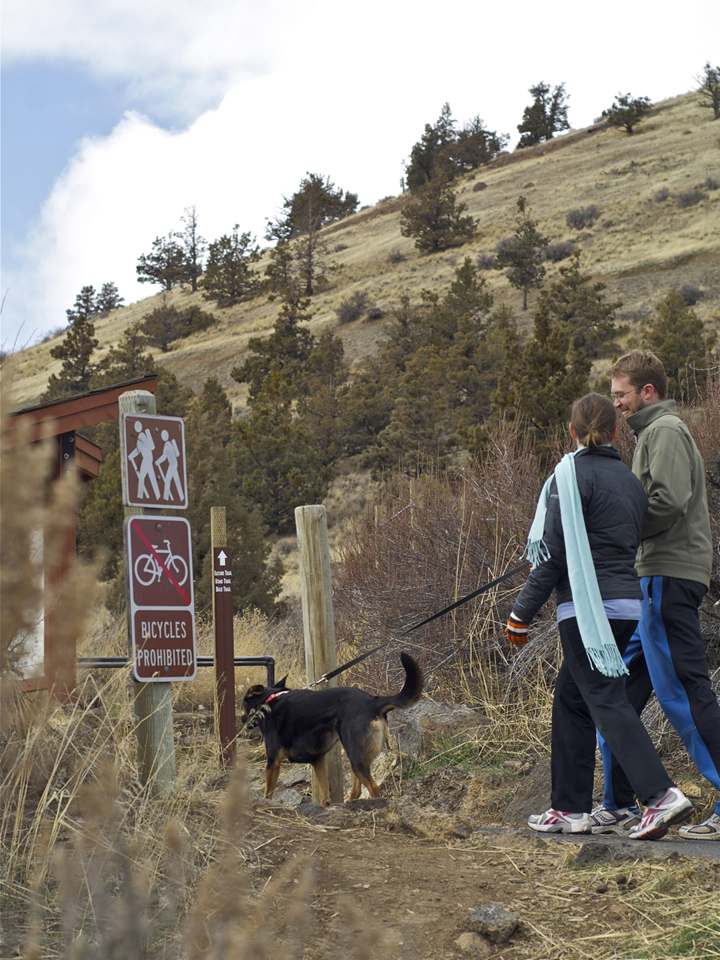 Pilot Butte has been drawing visitors since before you were a twinkle in your grandparents’ eyes.

Beyond the ancient lava flows of Newberry, there are countless other geologic attractions around Bend and Central Oregon that haven’t changed much over the years. A hike up Pilot Butte will give you killer views of a city that’s grown quite a bit recently, but if you look down at the ground under your feet, you can think about the fact that this 500-foot cinder cone has been standing in the middle of Bend for thousands of years. Pioneers used the volcano as a landmark to guide wagon trains seeking a safe passage crossing the Deschutes River, and the land was given to the state back in 1927.

There are oodles of other geologic wonders around Central Oregon that still (mostly) smell, sound, and look the same as they did when I was a kid. Check out the Oregon Badlands Wilderness to see untouched desert landscapes at their finest, or head northwest to Cove Palisades State Park to splash around in the same lake that enchanted me when I was still rockin’ pigtails and a Sesame Street bikini. I promise I didn’t pee in the water. Much.

That’s how we used to party, sonny

Folks in Bend get pretty excited about special events, and that dates back long before the Bend Pet Parade featured Chihuahuas floating from hot air balloons. 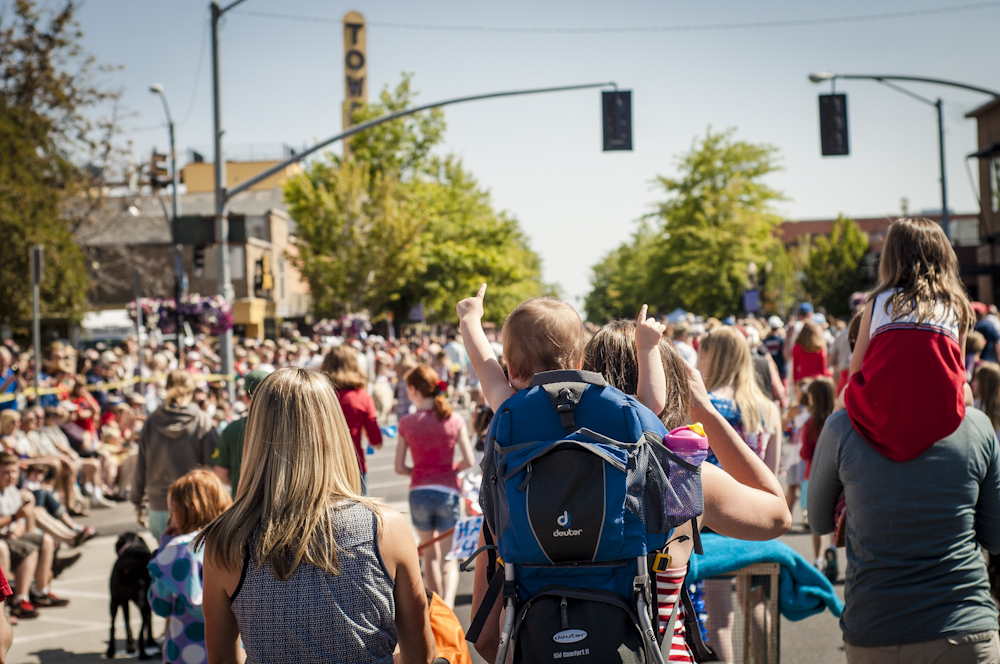 The annual Fourth of July Parade has been going strong in Bend since the 1930s.

The annual Fourth of July parade through Downtown Bend got its start way back in the 1930s, and it’s grown to be the largest parade of the year in Bend with more than 8,000 participants.

Athletic endeavors have always been a part of Bend culture, even when participants were sporting tube socks and mullets. The multi-event Pole, Pedal, Paddle race each May has been a Bend staple since 1975, and the Cascade Cycling Classic isn’t far behind with origins dating back to 1979. That makes it the longest consecutively run elite road bike stage race in the United States.

Scientists have done tons of studies on olfactory memory and the reason certain scents can transport you instantly to a place in your own history.

Even though I’ve lived in Bend almost 18 years, that unmistakable smell of sun-baked desert sage brings me right back to summers spent playing hide-and-seek in Redmond’s Dry Canyon. When it rains these days, I like to stand on my porch, breathe the scent of rain-drenched juniper, and remember my first high desert storm back when I could still run topless through the raindrops without getting arrested.

No matter how much Bend has changed over the years, I can almost guarantee the early pioneers used to stand on the banks of the Deschutes River and savor that perfect perfume of ponderosa pine bark and river water. If someone could figure out a way to bottle the fragrances of Bend, I swear they’d make a fortune.

Stuff your face where grandpa used to eat

Bend’s outstanding culinary scene has made lots of headlines lately, with the Huffington Post naming us one of nation’s top 15 “best restaurant cities.” And while it might be tempting to give credit to all the new award-winning eateries popping up over last decade, there are plenty of spectacular dining spots that have been serving up tasty chow since before some of those chefs were born.

One of Bend’s oldest and best-known riverfront restaurants, The Pine Tavern.

Bend’s iconic Pine Tavern is best known for the two towering ponderosa pines (one dead, one very much alive) jutting up through the ceiling of the dining area. But did you know this Bend landmark will celebrate 80 years in the restaurant biz in 2016? At a time when the country was barely pulling itself out of the Great Depression, the founders of Pine Tavern built a thriving restaurant serving timber workers and their families starting in 1936. These days you can stop by for one of the best happy hours in town and a basket of mouthwatering sourdough scones drizzled with honey butter.

If burgers are your passion, you’ll find two old-fashioned drive-in hot spots to satisfy you. Dandy’s Drive-in has been owned and operated by the same family since 1981, and its old-school charm is made more charming by the roller skating servers who zip out to your car to take your order.

Bend old-timers occasionally lament the fact that famed Jake’s Truck Stop is no longer on the south end of town dishing up some of the city’s tastiest breakfasts, but did you know it’s still operating? The name changed slightly to Jake’s Diner, and it relocated to Bend’s eastside in 2005, but you’ll still find many of the same menu items and crew members who made the place great in 1987.

Other longtime Bend eateries include Kayo’s (serving up tasty steaks and seafood since 1982), the D&D (Bend’s oldest bar, established in 1986), and Roszak’s Fish House (an old-school eatery offering seafood and prime rib since 1981).

And if you’d prefer to stock the fridge at your Bend vacation rental, try longtime grocery favorites Newport Avenue Market (open since 1976), Nature’s Marketplace (open since 1983), and Erickson’s (serving Central Oregon since 1915!)

Bobcats and otters and skunks, oh my!

There are always new exhibits at the High Desert Museum, but the place itself has been operating since 1982.

That hasn’t changed much since my first visit in 1984, just two years after they opened to the public. I still love going there and checking out the animal exhibits ranging from porcupines to badgers to otters to creepy-crawlies like snakes, spiders, fish, turtles, and other desert dwellers like a raccoon and a bobcat.

Besides cool critters, the High Desert Museum boasts an impressive array of natural history exhibits. Their 135-acre grounds has more than 100,000 square feet of exhibit space containing Native American artifacts, an authentic homestead and sawmill from 1904, and countless hands-on programs that bring history and science to life for kids and adults alike.

I wasn’t a beer-swilling 14-year-old, I swear

Deschutes Brewery may have gotten a bit bigger, but they’ve been serving up suds in Bend since 1988.

It’s true, the legendary Bend Ale Trail was not a part of Bend’s culture back when my grandma used to chase Grandpa out of the bar. But 1988 (right about the time I was jammin’ to Debbie Gibson on my Walkman) was when Deschutes Brewery burst onto the craft brewing scene in Bend. Things haven’t been the same since, with 16 breweries now rounding out the Bend Ale Trail, and a total of 28 breweries within 30 minutes of Bend.

But if you prefer your fizzy, frothy dose of drinkable nostalgia in a non-alcoholic form, you can always hit Goody’s Chocolates. Since 1984, they’ve been making the best old-fashioned sodas, milkshakes, hand-dipped chocolates, ice cream sundaes, and much more.

Try a walking tour from Des Chutes Historical Museum for a look at historic buildings in Bend.

I can’t claim I ever visited the Deschutes Historical Museum as a kid, but odds are good I strolled by it en route to Drake Park (which has been drawing awestruck visitors since 1921). Housed in the old Reid School (a historic landmark built in 1914), the Deschutes Historical Museum was created in 1979 and has been treating guests to a healthy dose of history and culture ever since.

While I’m pretty sure their free Heritage Walk App wasn’t around when I was learning to moonwalk on Grandma’s kitchen floor, it’s still worth downloading if you want some great insights into historical buildings around Downtown Bend.

Be nice. You’re in Bend. 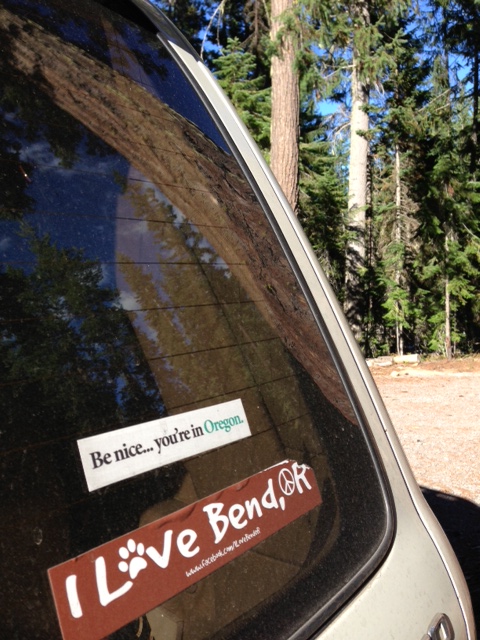 With an office that sits in the middle of the Bend Visitor Center lobby, I hear a lot of comments from Bend tourists. Besides “Bend is sure pretty!” and “man, you’ve got a lot of great beer,” do you want to know one of the top remarks I hear from our guests?

“Everyone’s so friendly in Bend!”

My grandma would be proud.