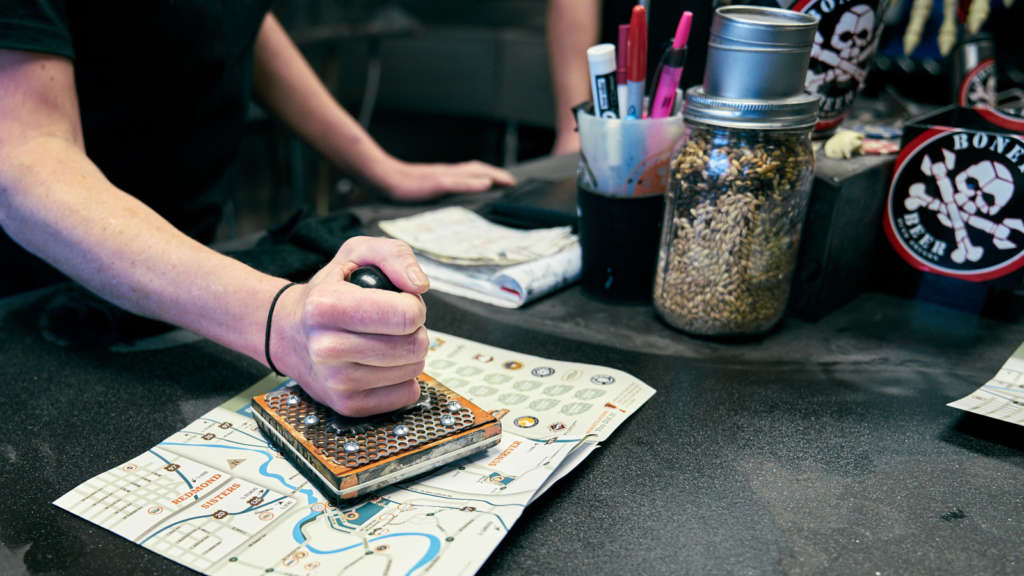 For as long as I can remember, Oregon’s statewide celebration of craft beer has taken place Presidents’ Day Weekend. But Central Oregon shook things up for Zwickelmania 2017. 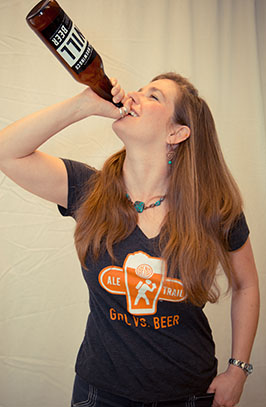 Blogger Tawna in her Girl vs. Beer t-shirt (the unofficial uniform of Zwickelmania).

While Portland held the event as usual last weekend, Central Oregon is hosting Zwickelmania 2017 on February 25 instead.

While I’m personally bummed because I’ll be out of town, I’m professionally thrilled to bits. No more fighting holiday weekend crowds to get your beer, or splitting your time between Zwickelmania and Oregon Winterfest. Beer fans can devote a whole, luxurious afternoon to the one glorious day when breweries throw their doors wide open for tours, tastings, and more.

Planning to attend Zwickelmania 2017? Here are 10 tips to make the most of your experience!

There are oodles of online resources to help you achieve Zwicklemania nirvana, and it pays to study them before you’ve had a sip of beer.

Review the map to plot your best route between participating breweries.

Skim the online directory so you know what each brewery is offering in terms of beer samples, food, live music, tours, and other amenities.

It’s like cramming for a test, but soooooo much better.

When it comes to completing a Bend Ale Trail passport, you can take years to do it. 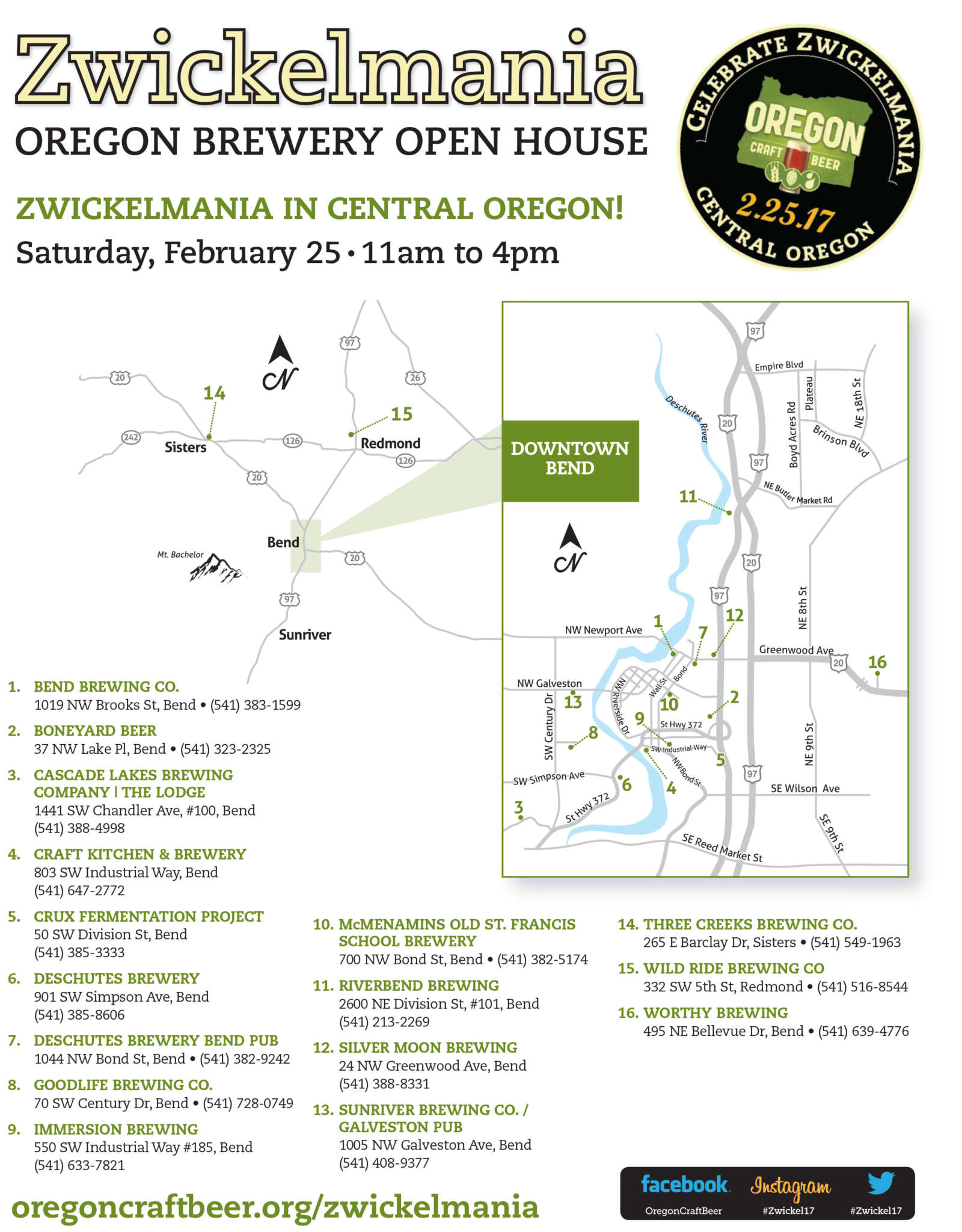 But your time is limited when it comes to Zwickelmania 2017, so it’s okay to be choosy. With sixteen breweries participating from 11 a.m. to 4 p.m., it’s not physically possible to hit them all unless you plan to dash through the door, grab a beer, and pound it while sprinting to the next brewery.

I don’t recommend that.

What I do recommend is pinpointing a handful of breweries on the list that you really, truly want to visit. Maybe you’re dying to ask questions of the head brewer at McMenamins, or maybe it’s your life’s ambition to taste special brews straight from the Zwickel at Crux. Perhaps you’ve been wanting to see KC Flynn perform at Cascade Lakes Brewing, or maybe you really want to sample the cold-brew cocktails they’ll be doling out at Deschutes.

Bottom line: Pick what you most want to see/do/drink/eat and start there. Then work your way down the list.

Go with a full tummy

The event kickoff at 11 a.m. can throw you for a loop if you show up several hours post-breakfast and fail to get something substantial in your belly before you start guzzling beer. That’s why it’s key to grab a good snack before you set out.

Protein-rich foods like chicken or salmon take longer to digest, which will slow how fast your blood alcohol level goes up. Foods high on the glycemic index like pasta are also a good bet, since alcohol changes your body’s stores of glycogen (a quick energy source stored in the liver). 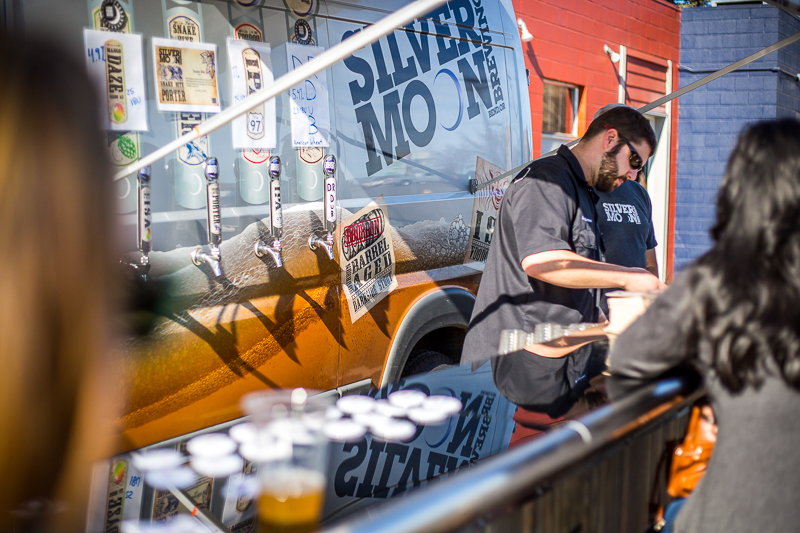 Depending on weather, many of the breweries serve up Zwickelmania suds outdoors.

It’s also smart to snack along the way so you’re filling your belly with something besides beer suds. Most breweries will be doling out free food, so take advantage of it!

While many breweries are hosting Zwickelmania 2017 festivities at their actual pub, some are throwing open the doors at the brewing facility itself. Sometimes that’s the same place, and sometimes it isn’t.

To be safe, make sure you consult the list before setting out.

Buddy up to a brewer

Besides the free beer and nibbles, one of the biggest things that separates Zwickelmania from a regular trek around the Bend Ale Trail is the chance to interact with a brewer.

Chatting with brewers and checking out the brewing equipment is one of the highlights of Zwickelmania.

At most participating breweries, the brewers themselves will be on hand to answer questions, talk about the brewing process, or even pour you a pint.

It’s a great opportunity to get the inside scoop about your favorite beer direct from the guy or gal who made it, so don’t be shy! If it helps, jot down a question or two before you go.

Making sure your body fluid doesn’t become 100% beer over the course of an afternoon is crucial when you’re attending a beer-centric event like this. I always stuff a Hydro Flask full of ice water in my purse and refill often as I go. 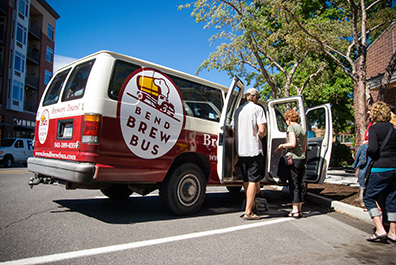 Leave the driving to someone else when you book an outing with the Bend Brew Bus.

Don’t even THINK of drinking and driving

There are gazillion ways to travel between breweries without risking a DUI or someone’s life. Here are just a few of them:

While Lyft and Uber aren’t yet in Bend, city officials are getting closer to making it happen (hopefully as soon as May).

But bottom line: There’s no excuse for driving while impaired. Ending up dead or in jail will put a serious damper on your Bend vacation.

Zwicklemania is a big deal, and it’s fun to have a souvenir to commemorate it. Many participating breweries are offering deep discounts on schwag, so stock up while you can!

GoodLife Brewing’s Zwickelmania specials include sales on merchandise and packaged beer, while Cascade Lakes Brewing has schwag bags they’ll be handing out while supplies last.

Most others will have T-shirts and hats for sale, or pick up a logo’d growler to take home.

Psst….want a few tidbits of insider info? Here you go:

Zwicklemania is a great way to collect a whole lot of Bend Ale Trail passport stamps in one afternoon, so make sure you snag an atlas at the first brewery you visit or stop by the Visitor Center.

Finished gathering stamps? The Bend Visitor Center is open seven days a week so you can collect your prize anytime. Stop by the corner of Lava and Oregon in Downtown Bend between 9 a.m. and 5 p.m. weekdays or 10 a.m. to 4 p.m. on Saturdays and Sundays.