7 things in Bend that’ll totally screw you up 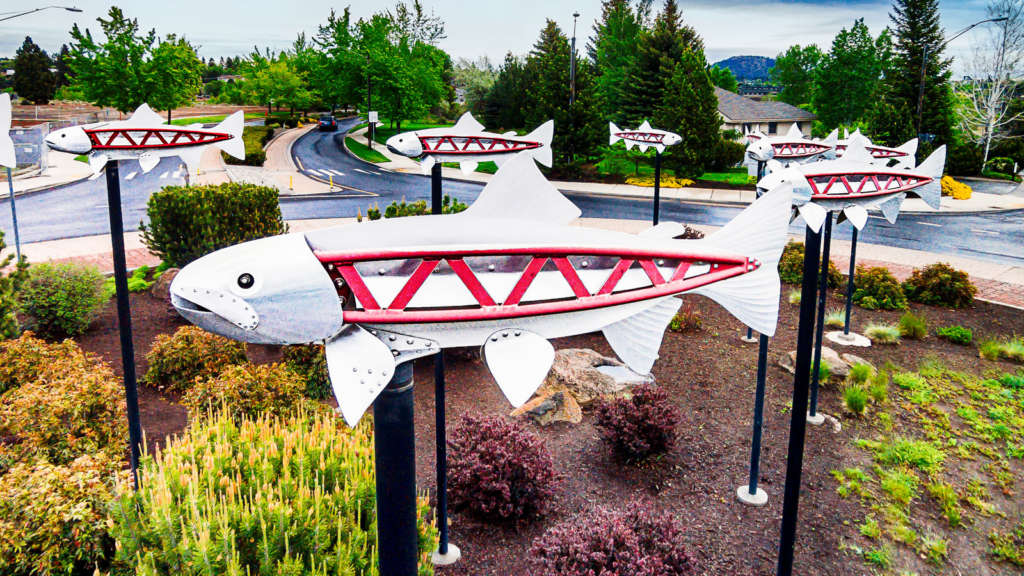 It’s one of many things that throws Bend visitors for a loop, and I’m not here to snicker about it. I’m here to clear up 7 of them so you don’t feel like a doofus on your Bend vacation. 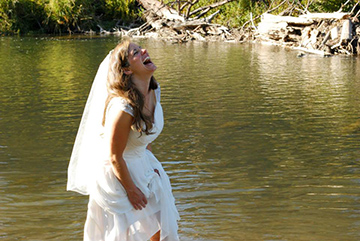 Blogger Tawna got hitched at Tumalo State Park (which is NOT anywhere near Tumalo Falls).

Let’s start with the one that spawned this blog post, since it’s one of the most common things to trip up Bend visitors.

Tumalo Falls is located about 14 miles west of Bend off Skyliners Road. You can follow these Google Map directions to get you there from the Bend Visitor Center.

Tumalo State Park is about 19 miles northeast of Tumalo Falls, and while it offers a great campground and fab views of the Deschutes River, there’s no waterfall in sight.

Tumalo Mountain is another entity altogether, and isn’t near the waterfall or the State Park (but is worth a hike in the summer months, so add it to your bucket list!)

There’s also the quaint little town of Tumalo, which does happen to be quite close to Tumalo State Park.

It’s the desert, right? So why is it cold?

Yes, Bend is a desert. But it’s a mountainous high desert that sits at 3,600-feet above sea level. “High” is the key word there (and I promise it has nothing to do with legalized marijuana in Oregon).

Bend’s altitude is responsible for our snowy winters and conditions that can fluctuate wildly. Even on scorching-hot summer days when temps reach the 90s or even break 100, odds are good you’ll still need a jacket at night. You also need to follow the high altitude instructions on the back of the brownie mix you’re baking at that Bend vacation rental (just sayin’).

Bend was named the nation’s dog-friendliest city by Dog Fancy magazine, and the city’s abundance of off-leash dog parks was one reason.

But that doesn’t mean Rover can roam anywhere he likes without a leash. In developed areas of Bend like neighborhoods, campgrounds, and even parking lots, your dog must be leashed at all times. Leash laws are enforced, and fines can be hefty.

Leash laws also apply between May 15 and September 15 on the Deschutes River Trail between Benham Falls and Meadow Camp, and in the Three Sisters Wilderness between the South Sisters climbers trail and Todd Lake.

Dogs are allowed off-leash when playing “river fetch” in National Forest areas, even along restricted trails. But make sure your pooch is well-trained to respond to voice commands and unlikely to tear off after deer or other wildlife.

For more info about doggy etiquette and laws in Bend, check out www.dogpac.org.

And it goes without saying that no matter where you are, you should do your duty when Fido does his doody. Carry waste bags and clean up after your pooch everywhere you go. It’s part of how you Visit Like a Local when you’re in Bend.

The snow is gone, so why isn’t everything open?

Visitors are sometimes surprised to arrive in the spring and discover the town itself is snow-free, but major landmarks still closed. What gives? 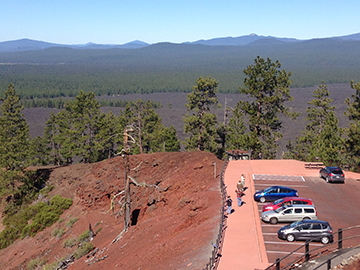 Clearing snow from seasonally-shuttered roadways like the Cascade Lakes Highway and the McKenzie Pass can take a looong time, particularly after a heavy snow year like 2017.

It also affects landmarks like the Lava Lands Visitor Center and Pilot Butte, where safety dictates closures during icier months. Generally speaking, most sites open in the weeks surrounding Memorial Day, though it can take longer for high-elevation attractions.

If you’re wondering about a specific site, call or stop by the Bend Visitor Center for up-to-the-minute info about seasonal closures. You can also keep an eye on the Bend Buzz Blog, where we usually put up a post like this one giving opening dates for major landmarks and roadways.

The river runs which way?

For some odd reason, many Bend visitors are under the impression that all rivers flow south. 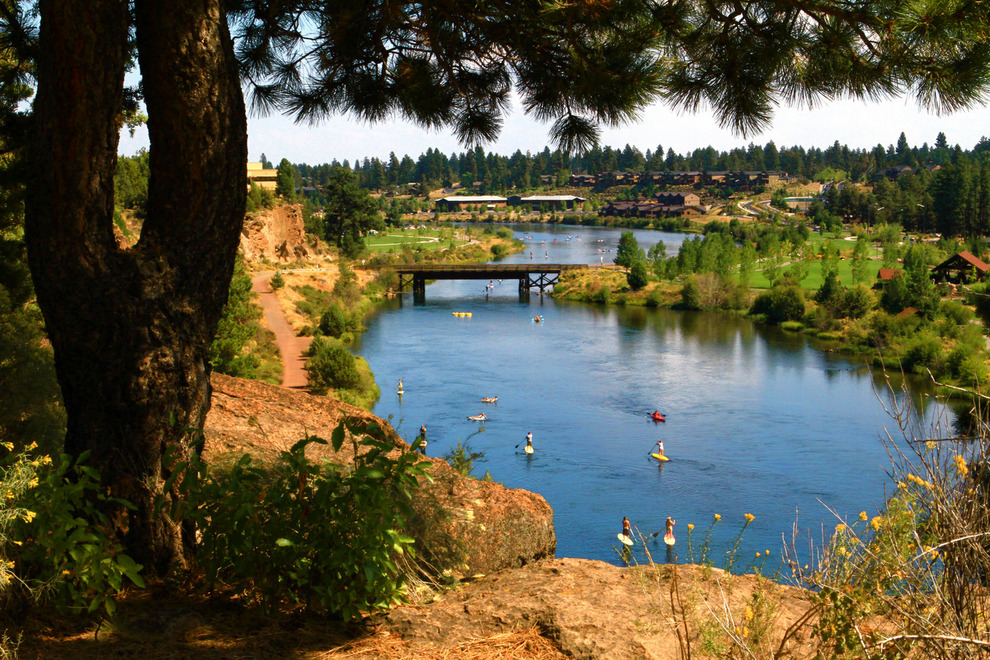 But rivers follow the laws of gravity, and water flowing from the mountains takes the path of least resistance in its journey downhill. In Bend’s case, that means the mighty Deschutes River flows north.

Good to know for all that kayaking, rafting, floating, and standup paddleboarding you’re planning to do in Bend!

For folks living in cities that don’t have traffic circles, Bend’s roundabouts can seem daunting at first glance. My mother steadfastly refuses to drive through one, always petrified she’ll be seized by demons and tempted to drive the wrong way. 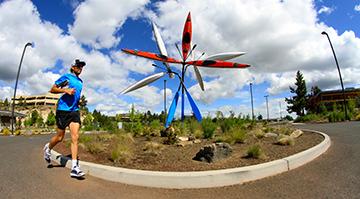 Bend’s traffic circles can be a source of confusion for some.

But roundabouts are actually pretty simple. Traffic flows counterclockwise, and traffic entering the roundabout must yield to vehicles already in it.

When you’re ready to exit, use your right turn signal to indicate your intent to leave the roundabout. Failure to signal is one of the most common mistakes drivers make, and you can be fined for not doing it.

Which day use park pass do I need?

State Parks Pass, NW Forest Pass, National Parks Pass . . . when it comes to day use permits, how the @#$% do you know which one you need to see all the landmarks on your Central Oregon bucket list?

Let’s start with State Parks. The main ones in Central Oregon are Smith Rock State Park, Tumalo State Park, La Pine State Park, Cove Palisades State Park, and Pilot Butte State Park. Pilot Butte and La Pine are the only two on that roster that don’t require any sort of parking fee or pass. The others charge $5 per day, and there are machines on site that take credit cards to make it nice and easy. Planning to visit more than one state park on multiple days? Splurge for the $30 annual pass or the $50 two-year pass, which we sell here in the Bend Visitor Center. There are no senior discounts for State Park Passes.

Now let’s talk about the NW Forest Pass. This one is my personal fave, since it grants you access to a whole lotta great stuff you’ll want to see around Central Oregon. This includes all the trailheads on National Forest land, like Newberry National Volcanic Monument, Painted Hills National Monument, and all the awesome lakes and trails off the Cascade Lakes Highway. Day use passes are $5, and you’ll find envelopes and drop-boxes at most major sites. But honestly, you’re better off paying $30 for an annual pass that grants you access to everything for the entire year. We sell that in the Bend Visitor Center, too.

Planning to drive the extra miles to Crater Lake National Park? Normal park entrance is $20 for seven days, but here’s a tip if you’re planning to hit gobs of parks on your Bend vacation: Splurge for the $80 Interagency Annual Pass and get access to all Forest Service, National Park Service, Bureau of Land Management, Bureau of Reclamation, and US Fish & Wildlife Service sites that charge entry fees. Be aware, though, that none of these passes – or the NW Forest Pass – is valid at any of the Oregon State Parks. Oh, and if you’re 62 and older, pony up $10 for a lifetime America the Beautiful Senior Interagency Pass that gets you into everything except State Parks.