Cougars and rattlers and bears, oh my! What to know about critters in the high desert. 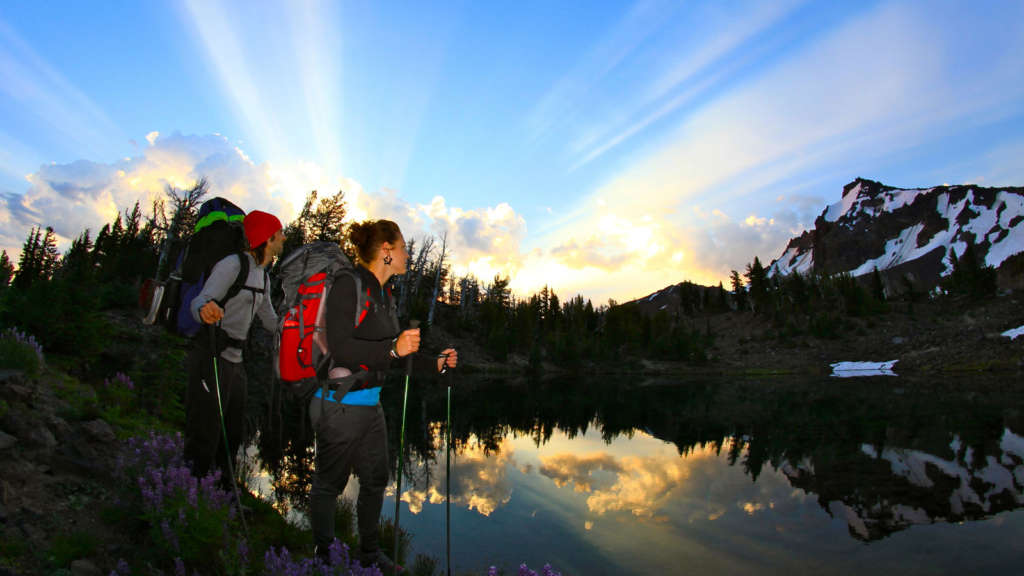 It probably won’t surprise you to hear Bend’s forests are full of critters.

But some are shocked to learn there are a few critters that could put a crimp in your vacation plans by, say . . . eating you.

Don’t freak. In 43 years as an outdoorsy Oregonian, I’ve never crossed paths with any of them. In fact, sightings of these three creatures are rare, and actual confrontations are rarer still.

Nevertheless, it pays to be cautious. With recent cougar sightings on the upper-traverse of Southfork, a bear sighting on Tumalo Creek, and the constant presence of the Northern Pacific Rattlesnake in the high desert, I’d like to share a few things you should know about each of these oft-misunderstood creatures.

What to know about cougars

Before I launch into all the scary-sounding stuff, it’s important to note that according to the Oregon Department of Fish and Wildlife, there has never been a recorded cougar attack on a human in Oregon history. Not one. 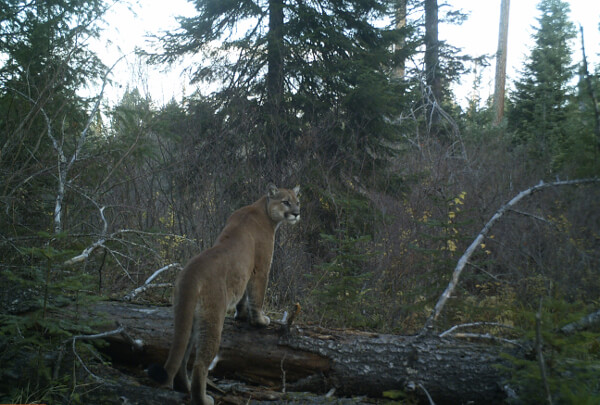 This handsome fellow was photographed by a wildlife cam set up by Deschutes Land Trust. Visit their website for more awesome webcam images, plus great info on Central Oregon’s great outdoors: www.deschuteslandtrust.org

Nevertheless, it’s smart to be educated when you’re venturing into the wilderness.

Cougars are elusive and solitary predators, and it’s estimated there are 6,500-6,800 of them statewide. With the average male staking claim to a territory of up to 100 square miles, they’re obviously cruising around Central Oregon.

While most people never see a cougar, it’s likely one has spotted you if you’re a frequent explorer in Central Oregon’s wilderness. Here’s what to keep in mind when it comes to these big cats:

The legend is true. There’s another kind of cougar in Bend, just like in any town where attractive young men make easy prey for women of a certain age. 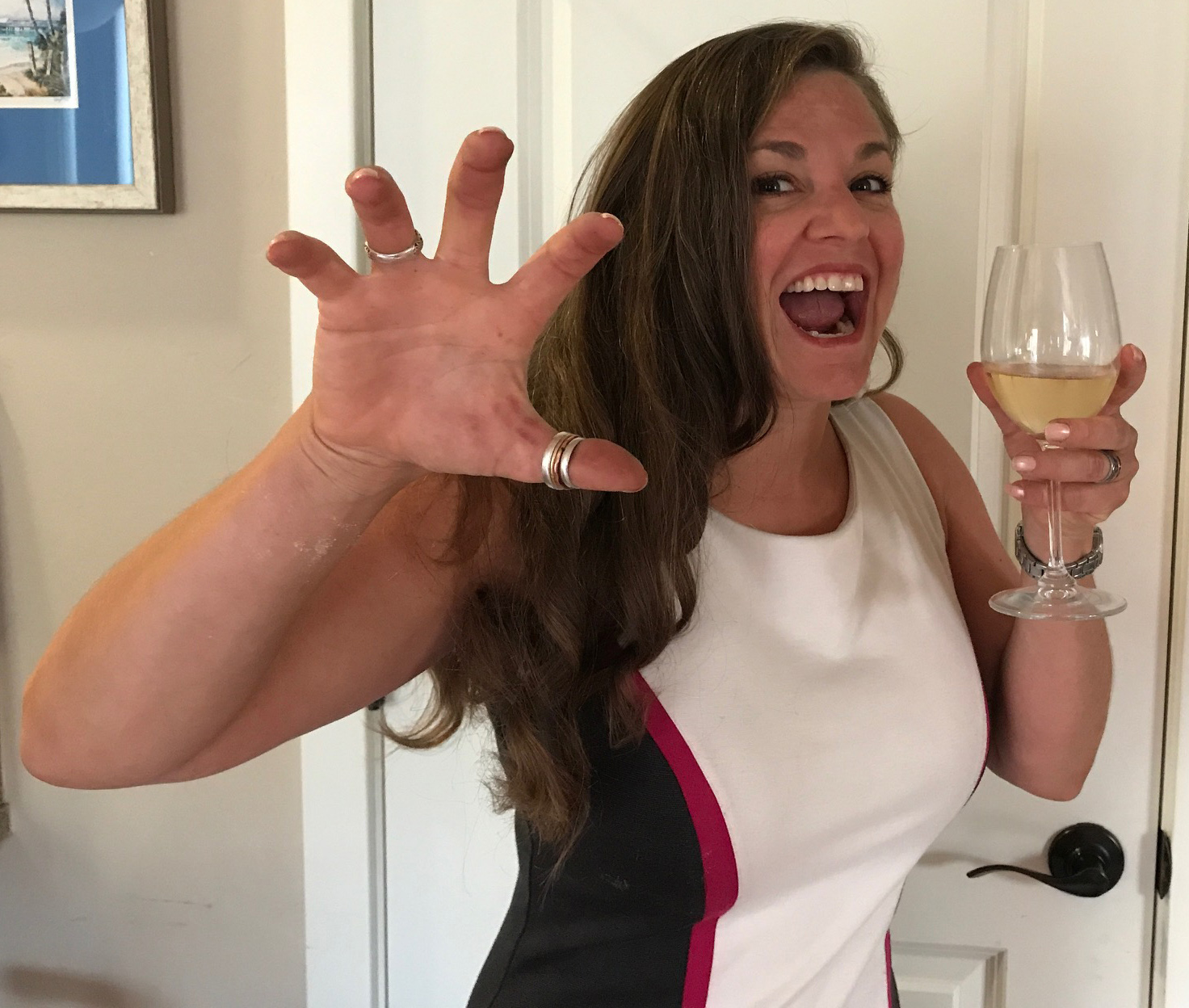 Blogger Tawna does her best impression of the other kind of cougar you might spot in wine bars around Bend.

If you’re looking to be caught by one, wine bars are a good bet. Bend has several amazing ones, including Portello WineCafé and Sip Wine Bar. Even if you don’t spot human cougars there, both places make excellent spots to go for a tasty glass of wine and some nibbles. Sip has ladies’ night every Wednesday with $1 off everything from 4- close, while Portello has wine flight weekends every Saturday and Sunday night.

What to know about bears

According to the Oregon Department of Fish and Wildlife, Oregon is home to about 25,000-30,000 black bears (many of which are not actually black, but cinnamon or brown in color). 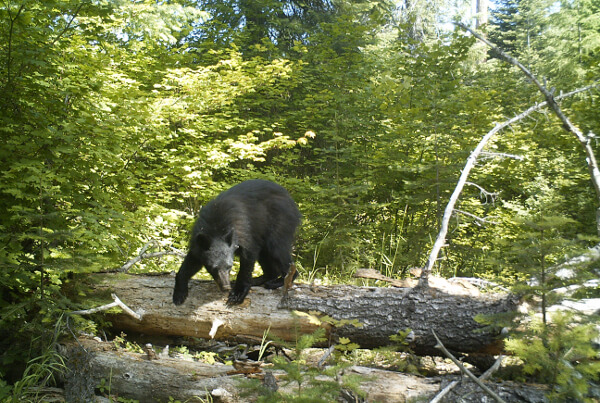 This black bear was photographed by a wildlife cam set up by Deschutes Land Trust. Visit their website for more awesome webcam images, plus great info on Central Oregon’s great outdoors: www.deschuteslandtrust.org

Plenty of them make their homes in wilderness areas surrounding Bend, so here’s what you should know if you’re hiking, fishing, or camping in bear country:

He may look like a bear, but the massive, shaggy creature found at NW Home Interiors is actually Buddy. 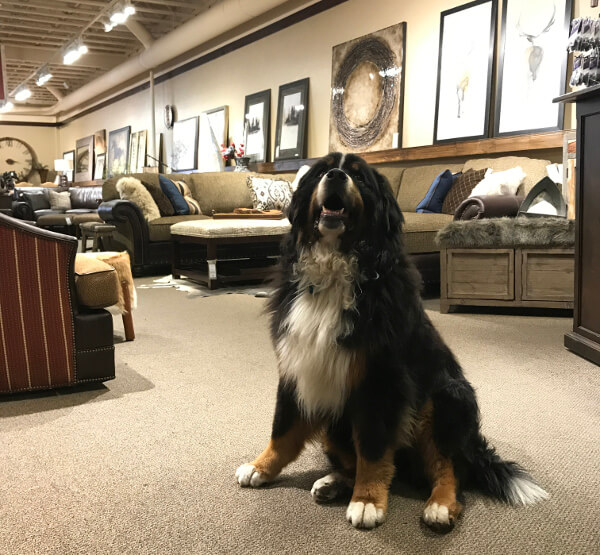 Buddy from NW Home Interiors in Downtown Bend might look like a bear, but he’s more likely to nap on your feet than steal your picnic.

He’s a friendly Bernese Mountain dog who hangs out in the showroom at this fabulous furniture boutique in Downtown Bend.

He supervised my purchase of a massive king bed frame made from repurposed barn wood, so I can assure you his taste is quite exquisite.

What to know about rattlesnakes

While rattlesnakes are common in the high desert, there are a few telling statistics when it comes to snakebites. Roughly 90-percent of victims are male, 50-80 percent of bites are to the hand, and at least half the victims were intoxicated at the time of the bite.

In other words, if you’re drunk and handling a snake on purpose, it kinda ups your odds of snakebite.

But if you’re cautious, alert, and not trying to pet one, your odds of an unpleasant encounter with a rattler are actually quite slim. Snakes are more afraid of you than you are of them. Really. 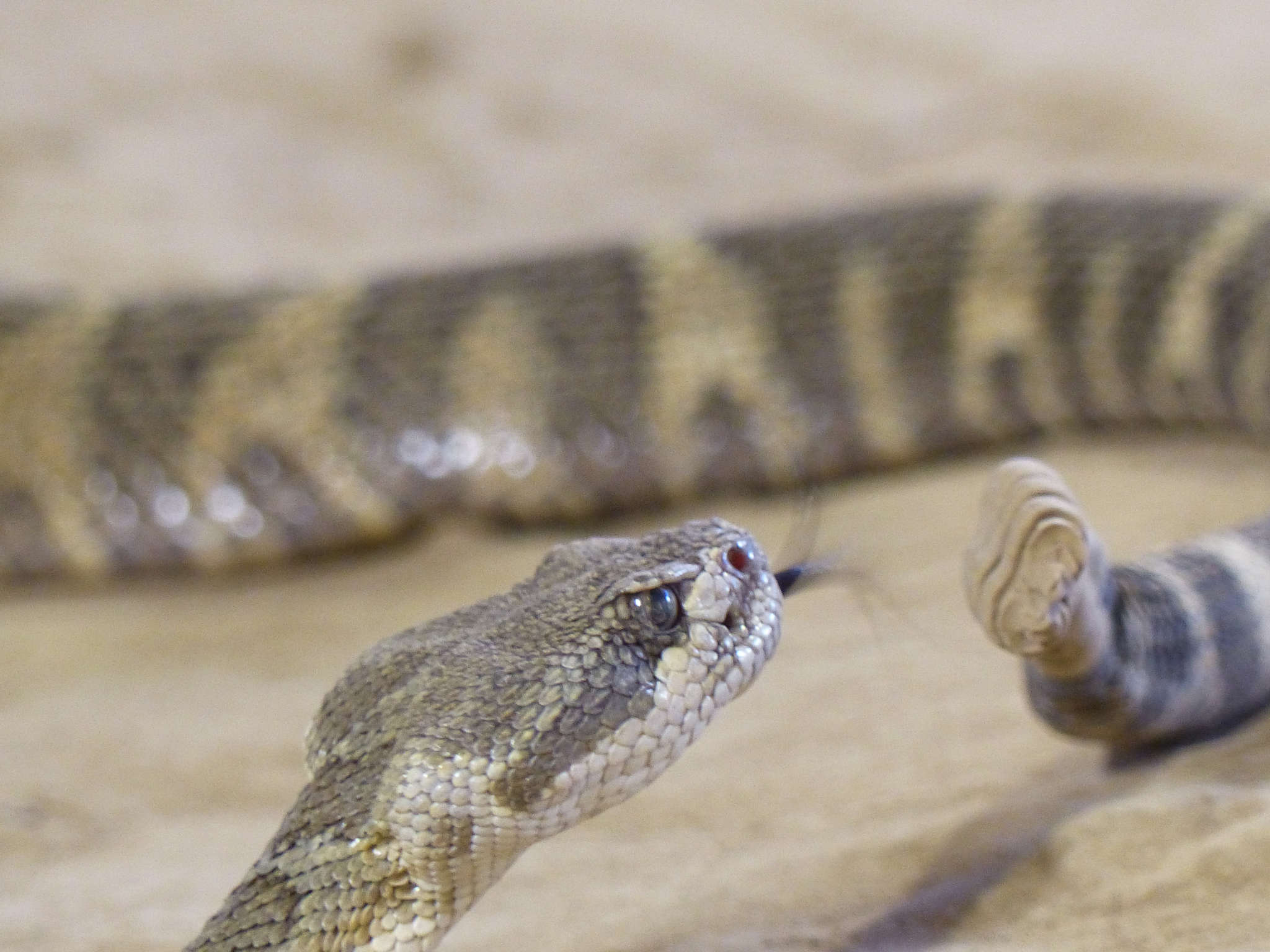 You probably don’t want to meet this rattlesnake in the wild, but you can safely scope out several desert-dwelling snakes at the High Desert Museum (which is who provided us with this fab photo)

A few tips to help you stay safe in areas where rattlesnakes are found: 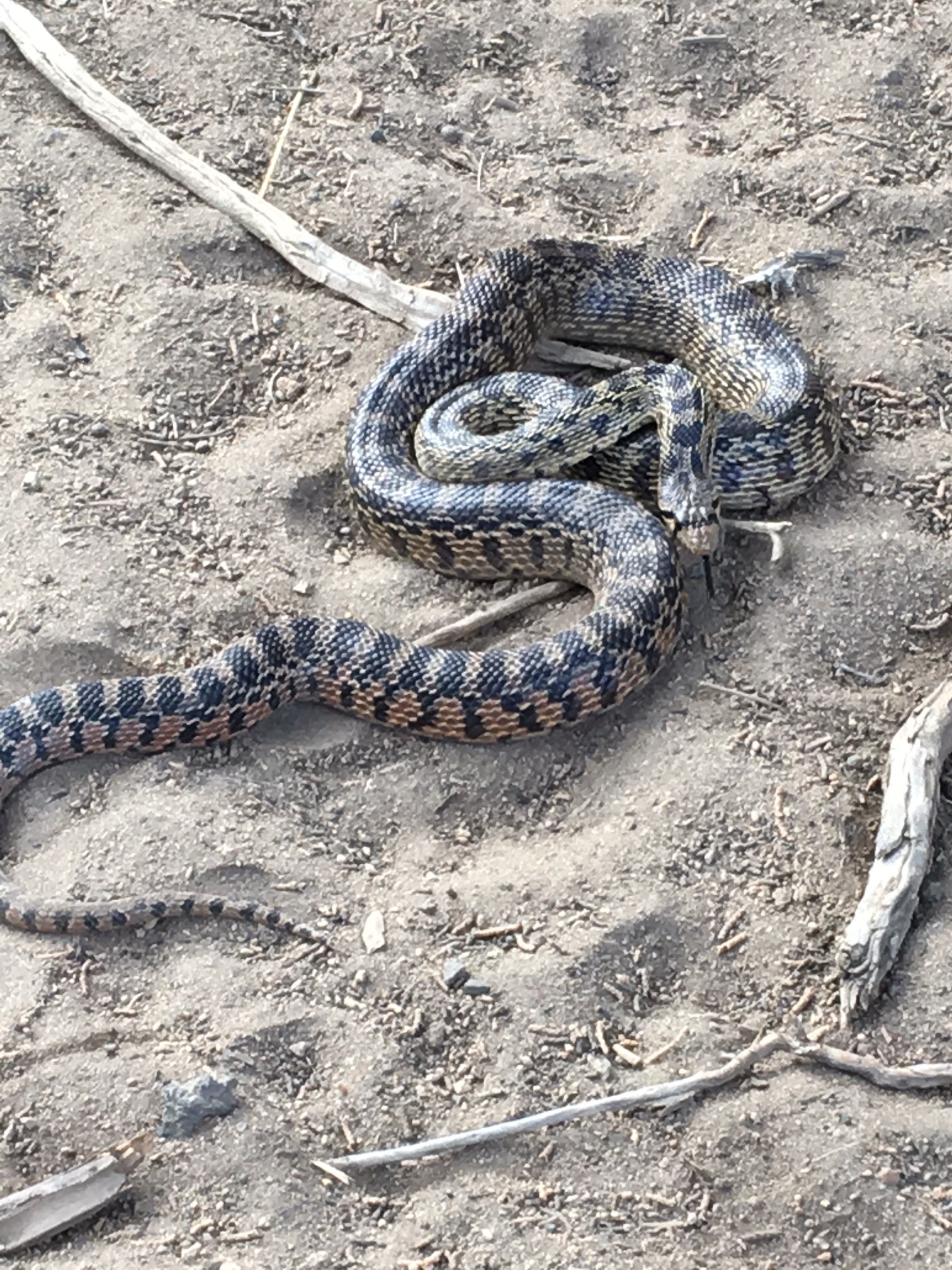 This harmless gopher snake was photographed at Pine Nursery in Bend, where he was pretending very hard to be a rattlesnake.

Often mistaken for rattlesnakes are harmless bull snakes, which are also known as gopher snakes. Compounding the problem, bull snakes like to imitate rattlesnakes by shaking their tails as a defense mechanism.

Your first cue that you might be looking at a bull snake would be the lack of a rattle on its tail. If there’s no rattle, check out the body. Though they have similar patterns, bull snakes are usually cream or pale yellow with black or brown markings, while rattlesnakes are much darker. Also, rattlesnakes have triangular-shaped heads, while the bull snake’s head is usually the same size and shape as its upper body. 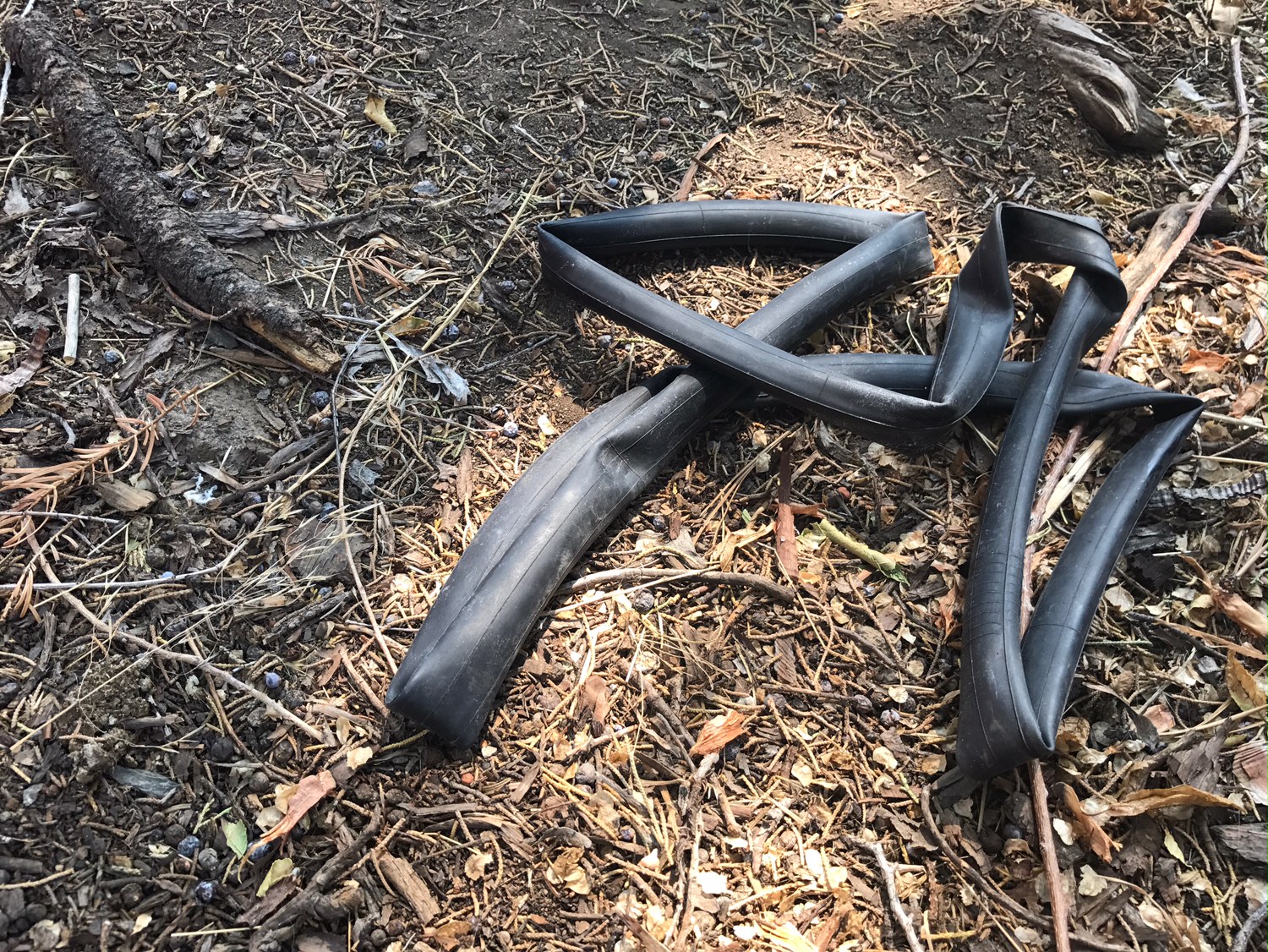 This is . . . um, not a snake. But if you see garbage like this lying on the ground, pick it up and take it to the trash so you leave our wilderness areas nicer than you found them.

Other things mistaken for rattlesnakes in Central Oregon include discarded pieces of rope, cables, and bike inner tubes. Instead of running from them, how about doing a kindness to our environment (not to mention your fellow hikers) and picking up any discarded rubbish you might spot on the trails? For more Visit Like a Local tips, go here.

Now get out there and enjoy Bend!