10 REMARKABLE PEOPLE YOU MIGHT MEET AT THE BENDFILM FESTIVAL

The 2017 BendFilm Festival — part of Bend Oregon’s Tenth Month — will present 36 feature films and 68 shorts from 13 countries. From quirky comedies to motorcycle adventures to powerful narratives, it’s all about the story— and there are plenty of chances to be dazzled, delighted and entertained.

But who’s telling these stories? It just might be the person sitting next to you in the theater, sharing your armrest. Seriously. Filmmakers, actors, panelists, and jurors are often in attendance, eager to talk about their work and the future of independent film. BendFilm Festival is your chance to sidle up to a few legends, have a conversation, and walk away with some serious indie cred.

Who will you meet this year? 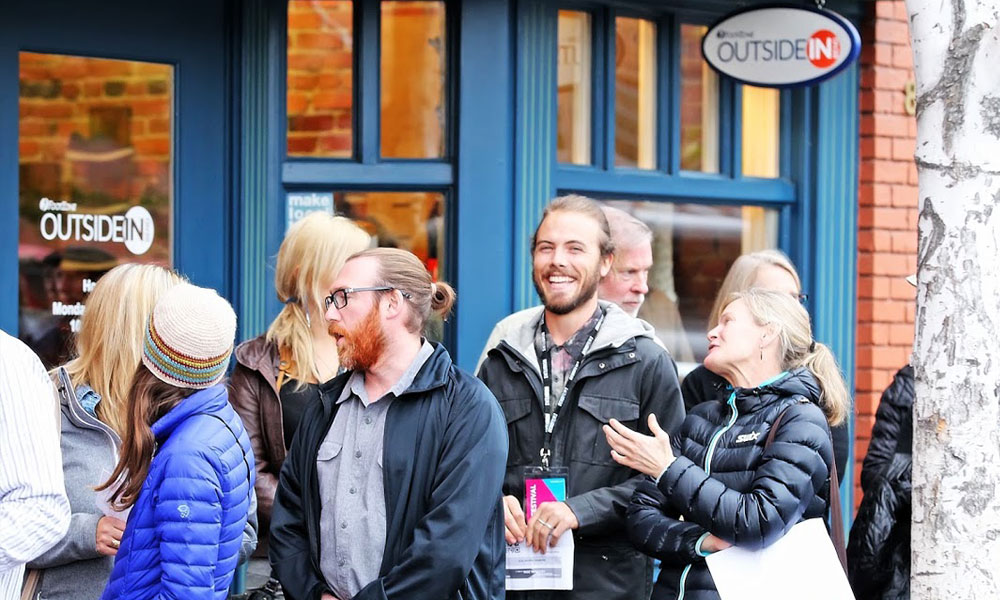 BendFilm Festival is host to the world premiere of CJ Wallis’s newest documentary, Perfect Bid: The Contestant Who Knew Too Much. What happens when a math teacher from Texas spends the majority of his life memorizing the prize amounts on The Price is Right? Answer: one of the biggest controversies in game show history. The film explores Ted Slauson’s compulsive hobby and unique quest that rattled news outlets around the country. Audiences will have a chance to speak with both Wallis and Slauson after the screening.

Molly Kreuzman, director of Earth Seasoned #GapYear (a movie about a woman diagnosed with Attention Deficit Disorder, Dyslexia, and short-term memory problems who finds her greatest teacher in nature), hails from Ashland, Oregon. But she also lived in Bend for years. (Once a local, always a local, right?) During that time, she reopened the historic Tower Theatre, participated in the launch of BendFilm, and sat on the board of the High Desert Museum. Earth Seasoned is her directorial debut.

Onur Tukel is a Turkish-American actor, artist, and filmmaker who has worked with A-listers like Sandra Oh and Anne Heche. His newest film, The Misogynists, captures the story of two men celebrating in a hotel room on the night Donald Trump is elected president. As the evening progresses, the two men begin to sense the historic political upset that is playing out before their eyes, challenging their beliefs, motivations, and identities.

“This movie is for everyone,” says Tukel. “It is not pro-Trump or anti-Trump. It mocks how fractured our country is and how combative (and unproductive) political discourse has become in this country. This movie is meant to unite people, not divide them.”

In Walking Out, an estranged father and son are forced to rely on one another to survive an unforgiving Montana wilderness. This survival saga and heart-stirring father-son tale is Andrew Smith’s third feature film, made in collaboration with his twin brother, Alex. The Smith brothers’ first film, The Slaughter Rule, was a pivotal early role for Ryan Gosling. Andrew will be available after the screening to chat about his films and upcoming projects.

Blake Robbins is an award-winning writer, director, and actor—you might recognize him as Jim’s brother in the hit NBC show The Office. The Scent of Rain and Lightning is his second feature film, based on the novel by Nancy Pickard. When a young woman learns her parents’ killer has been released from jail, she must revisit old wounds while discovering the devastating power of hate and the true cost of family secrets.

THE MOVER AND SHAKER

Jill Gwen was the Senior Vice President and Head of Finance & Operations of Fox Searchlight Pictures from 1996-2016. She oversaw all aspects of production, development, marketing, and distribution for over 161 films, including Birdman, 12 Years A Slave, and Slumdog Millionaire. During an intimate Q & A panel on October 13th, Gwen will give honest advice about starting or advancing a career in the dog-eat-dog world of Hollywood.

Peter Gilbert has won national and international honors for his groundbreaking work as a producer, director, and cinematographer including Prefontaine (1994) and Hoop Dreams (1997). Film critic Roger Ebert said, “A film like Hoop Dreams is what the movies are for. It takes us, shakes us, and make us think in new ways about the world around us. It gives us the impression of having touched life itself.”  Peter Gilbert has stayed true to his independent film roots by co-founding Forager Film based out of Chicago and serves as a juror for this year’s BendFilm Festival.

Danielle DiGiacomo is the Vice President of Acquisitions at The Orchard, a pioneering music, film and video distribution company serving over 30 global markets. She manages the acquisition of independent films for distribution across cinemas and digital platforms worldwide, including 2015 Oscar-nominee Cartel Land and Sundance 2017 Grand Jury winner Dina.  DiGiacomo is one of nine jury members at this year’s BendFilm Festival.

David Byars, director of the hot-button documentary No Man’s Land (an on-the-ground account of the 2016 standoff between federal authorities and protesters occupying Oregon’s Malheur National Wildlife Refuge), offers an unbiased snapshot of the crisis that unfolded in January 2016. Byars will be joined by special guests at each screening—reporter Amanda Peacher of OPB and Harney County Circuit Judge William D. Cramer join the lineup for a candid, dynamic discussion about domestic encounters between our government and disgruntled civilians.

Assuming you haven’t lost any digits in a machete juggling accident, you have ten fingers. Enough to count your way to October, which is not...
Read Post

8 ways to get ready for fall in Bend

We’re less than two weeks from the official start of autumn, and warm daytime temps assure us there’s still plenty of summer fun to be...
Read Post

Lost your muse? Find her in Bend during Tenth Month 2018!

Got a passion for independent film, culture, art, tech, business, or all of the above? Welcome to Tenth Month. Yes, October’s technically the tenth month...
Read Post

5 reasons fall is the best time to Visit Bend

10 MOMENTS OF SHEER AWESOMENESS DURING TENTH MONTH IN BEND, OREGON

Like a kid inside a Chuck E. Cheese sky tube, October has vanished. One minute you’re sitting there scrolling through your phone, and the next…...
Read Post

10 NEW PLACES TO EXPLORE IN BEND DURING TENTH MONTH

Some might say October is the best month to visit Bend. Summer crowds have dissipated. The weather is perfect—a crisp yet sunny invitation for puffy...
Read Post

Thirteen years ago, iPods dominated the market, Skype wowed the world, a thing called “The Facebook” was all the rage on college campuses, and if...
Read Post

Wouldn’t it be great if there was a 5-Hour Energy® drink to feed your creativity? But instead of five hours, it would last anywhere from...
Read Post

10 REASONS WHY OCTOBER IS THE BEST MONTH TO VISIT BEND

Ah, Bend. Known for its flowing craft beer, lofty mountains and holy-heck 300 days of sunshine, our little corner of the world certainly drops a...
Read Post

When most people think of Bend, they picture flowing craft beer and world-class mountain biking trails. But Bend is also a hub...
Read Post

Please complete the form below in order to be considered as an official Tenth Month event. The Tenth Month team will review your submission and...
Read Post
View All
‌