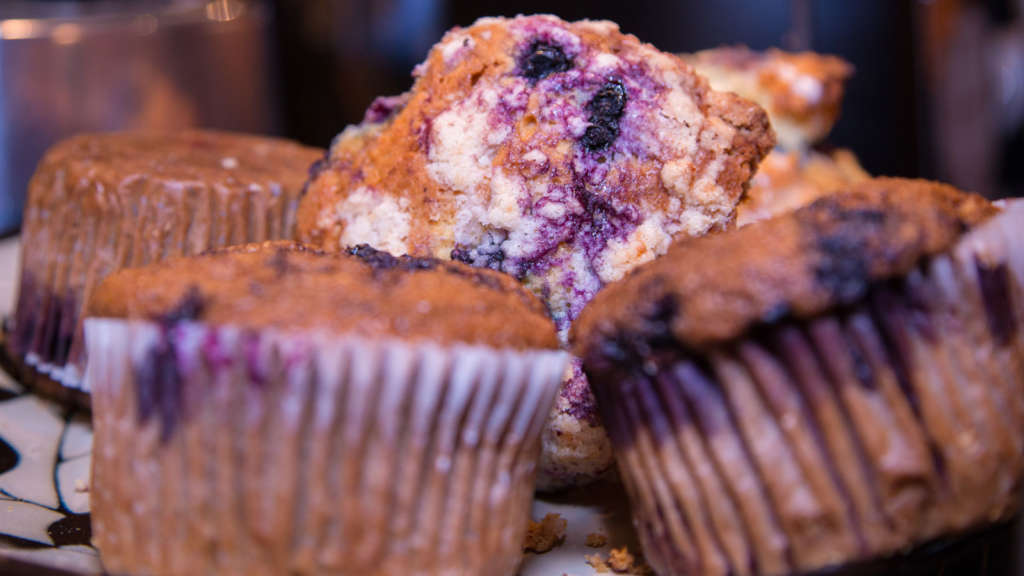 If you want to find the pulse of a small town, look for its diners. Those little slices of Americana where you can belly-up to the counter and order a hearty breakfast with hot coffee poured by a smiling waitress who knows half the patrons on a first-name basis. 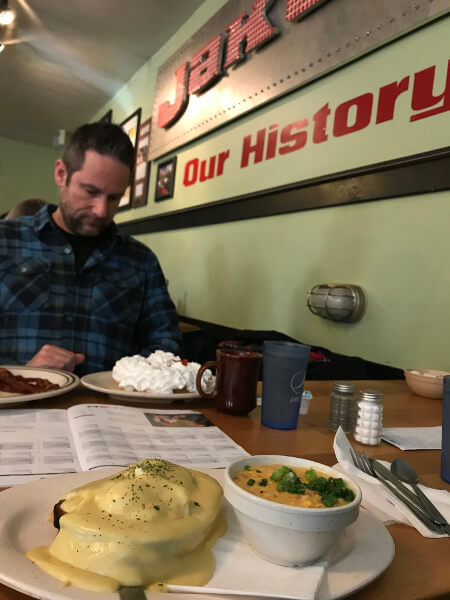 Get heaping forkfuls of Americana and Bend history (along with a tasty meal!) at Jake’s Diner.

There’s much debate about the difference between “diners” and “cafés” and “restaurants” and whether the terms are interchangeable or defined by operating hours, cuisine, regional preferences, or something else.

I define them by “something else.” It’s the unmistakable homey vibe that leaves you feeling like you’ve just stumbled into the cozy living room of any given city. That’s a “diner” to me, and here are my four favorites in Bend.

A Bend landmark since 1987, Jake’s Diner is one of Bend’s most recognizable and beloved diners. Those of us who’ve been in town a couple decades remember when it was out on south 3rd Street, and those who love it cheerfully followed when they moved to their Eastside location in 2005.

Since I fit into both categories, I visit Jake’s regularly and always feel like I’m showing up to a family reunion even when I don’t know a soul in the place. 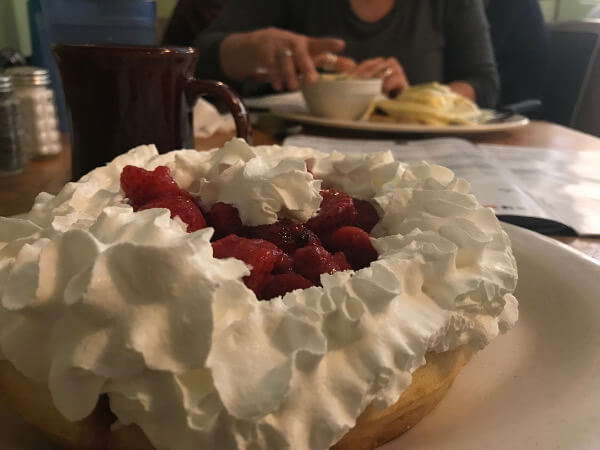 Mmmmm…..waffles! So tasty at Jake’s.

The walls are lined with historical memorabilia and classic diner décor, while the menu is filled with hearty fare that will stick to your ribs on cold winter days.

Order a classic like the eggs benedict or the chicken fried steak and you’ll find they’re not only generous with the portions, but with hefty ladles of hollandaise or gravy. And whatever you order, make sure to add a side of their famous cheddar bacon cheese grits. 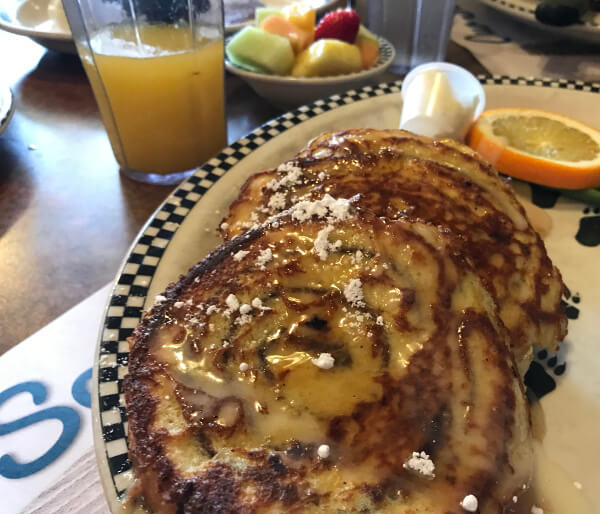 And if you’re lucky enough to have a fridge in your Bend hotel or vacation rental, score! The hearty portions at Jake’s ensures you’ll have leftovers, and I have it on good authority (mine) that their chow makes for excellent midnight snacking (especially those cheese grits!)

Maybe it’s the unique bear-themed décor peppered around the inside and outside of the building. Maybe it’s the contagious friendliness of the servers, or the fact that they always go the extra mile to refill your coffee, coordinate a special order, or answer questions about the menu items.

Or maybe none of that matters because the food is so tasty and hearty and that’s what counts. 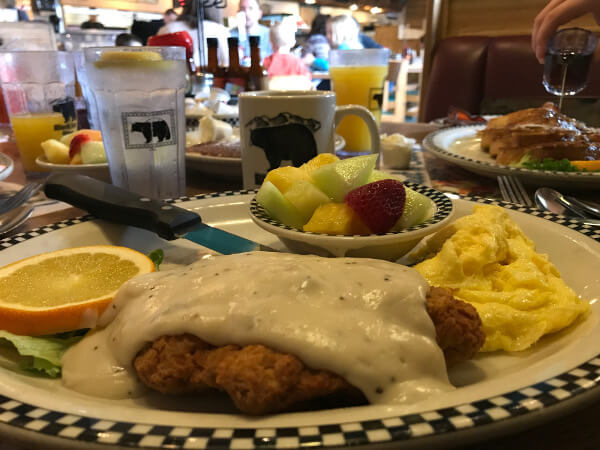 Black Bear Diner is a family favorite when the kids are with us, since there’s something on the menu to thrill every palate. From their unique cinnamon roll French toast, to the scrumptious chicken apple sausage with eggs and a side of home-fried potatoes, everyone gets exactly what they’re craving when they come here.

They even offer a section of the menu filled with lighter fare for those counting calories or wanting something that’s not quite so heavy.

Check out their awesome on-site gift shop on your way out for a set of bear paw slippers or boxer shorts. You can even grab a pie to take home!

Here’s where I confess that I considered omitting Sargent’s Café, not because their name technically says “café,” instead of “diner,” but because I want to keep this quiet treasure all to myself. 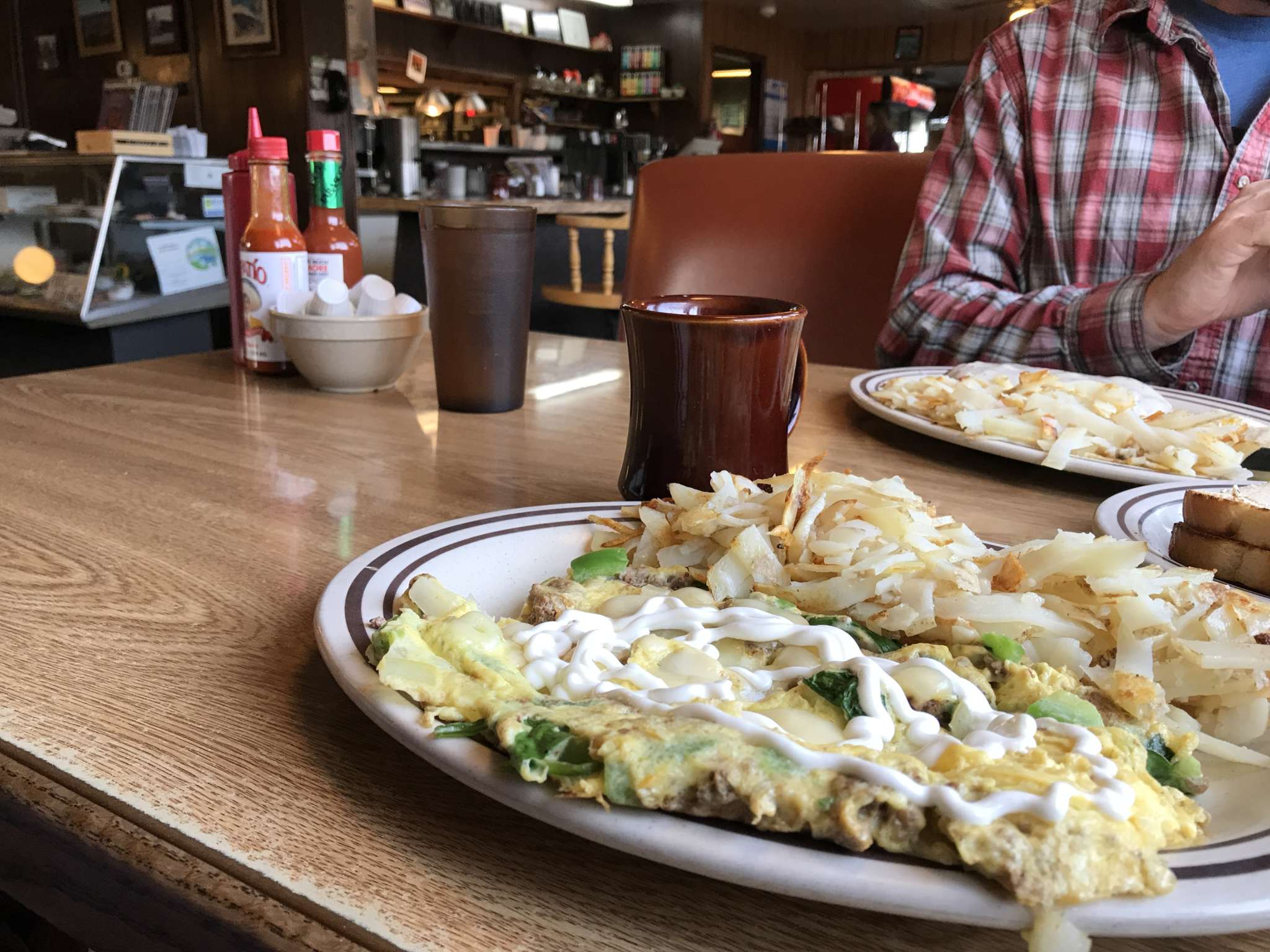 The Cougar Special and the perfect diner vibe at Sargent’s Cafe.

But Sargent’s is too good not to share, and despite the name, it really does offer the quintessential diner experience. You’ll spy a lineup of longtime locals at the counter bar from breakfast through lunch, and one look at the menu tells you this place is a Bend landmark with a finger on the pulse of the community.

There’s the Lava Bear special (a hat-tip to the Bend High mascot) which is meatloaf and a fried egg on an English muffin, smothered with sausage gravy and hash browns.

Or choose the Cougar Special (named for Mountain View High’s mascot) featuring ground beef, onions, mushrooms, spinach, and Swiss cheese, all scrambled together with eggs and topped with sour cream and a side of hash browns. The last time I ordered it, I swapped out the mushrooms for green pepper and then spent the rest of the day telling my husband, “My tummy feels so happy.” I think he wanted to stuff me in the trunk after an hour.

But it would be worth it because the food is seriously sooooo tasty and comforting.

Bonus for Sargent’s: Their prices are by far the lowest on this list, so it makes a great stop for those pinching pennies or looking to feed a large family.

This is another longtime Bend staple that’s technically a café, but offers such a classic diner experience that it’s impossible not to include them on the list. 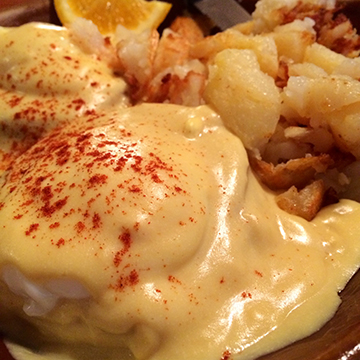 The potatoes at Palmer’s Café are like nothing you’ve ever experienced. Trust me here.

Palmer’s Café has been a Bend landmark for more than 30 years, and stepping inside this Midtown rambler leaves you feeling like you’ve just walked into grandma’s living room.

The portions are huge and hearty, and the menu offers enough variety to make this a diner stop that will pass muster with even the snobbiest foodie palate. They’re most famous for unique dishes like their blueberry banana nut French toast or lunchtime favorites like Harry’s Homemade Potato Salad.

But for me, it’s all about the eggs benedict. There’s nothing fancy about it, but everything’s in perfect proportion—the large English muffin, the thick ham, the well-poached eggs, and the exact right amount of hollandaise. Just enough hollandaise, in fact, to leave a little extra for dipping their housemade potatoes, which are super swoon-worthy. They’re like an odd hybrid of potato chunks smooshed and fried like hash browns, and I often find myself enjoying them as much as the main meal.

While wait times can sometimes be longer at this locals’ hotspot, they make up for it by offering a big carafe of coffee for customers waiting around for tables. It’s a great way to hang out and chat with Bend locals about what they like to see and do in Bend.