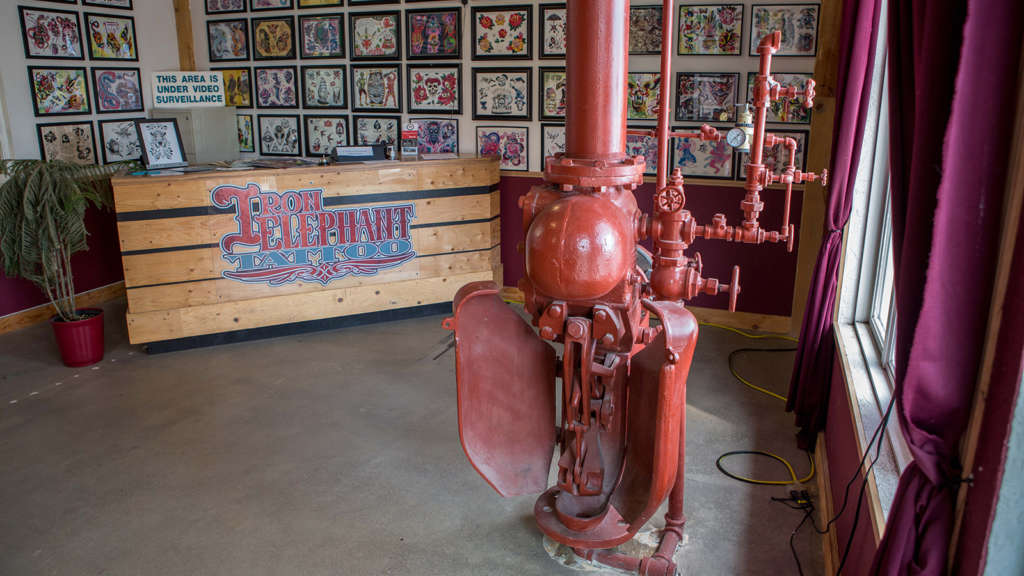 Whether you’re a hardcore history buff or just someone with a mild interest in learning more about a place you’re visiting, Bend is a cornucopia of hidden historical gems. 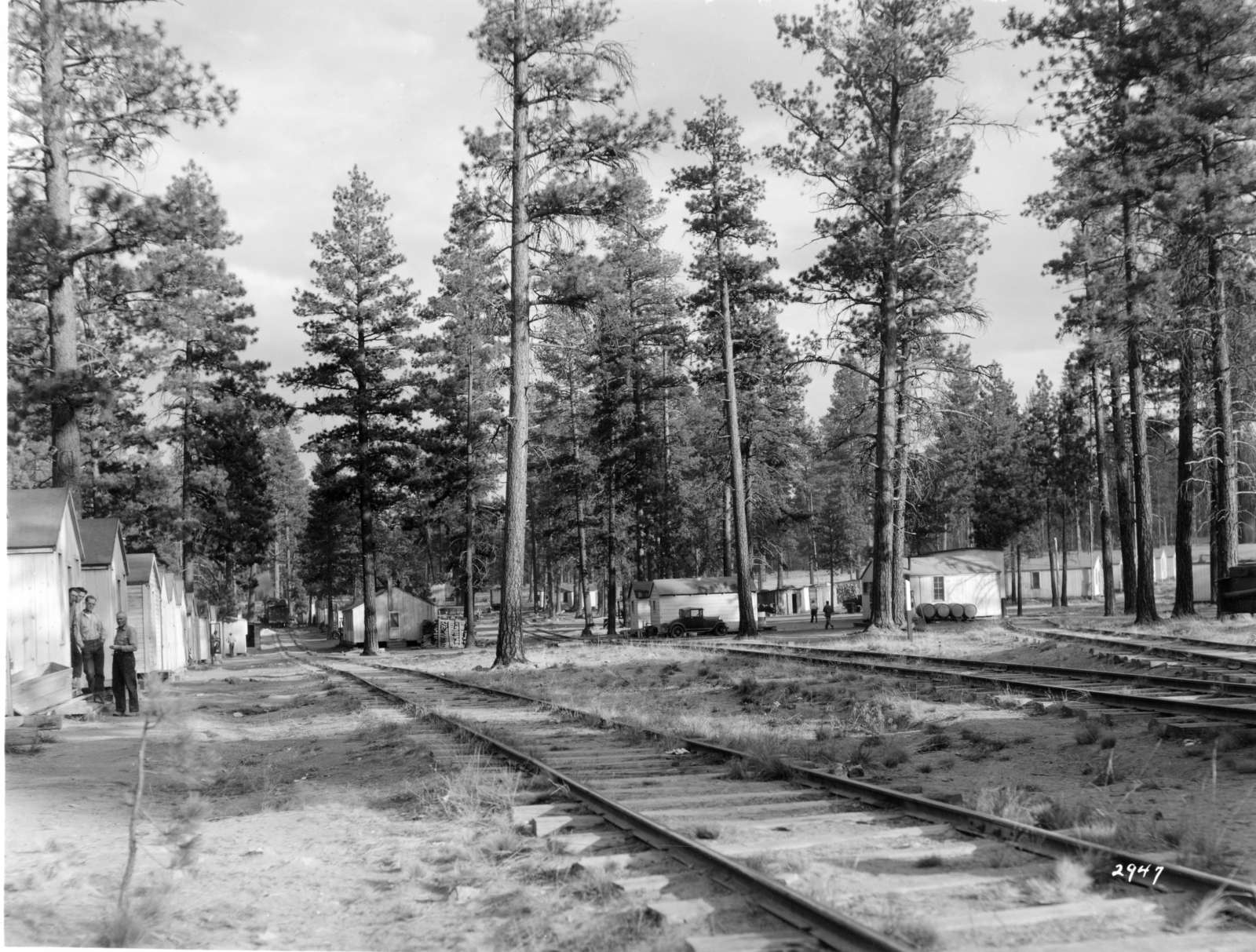 One of the mill camps populated by camp cars that were transported to the area via rail.

We teamed up with our friends at the Deschutes Historical Museum to bring you eight don’t-miss historical attractions that are easy to check out while you’re shopping, hiking, or just moseying around Bend.

The camp cars near the Les Schwab Amphitheater

What are they? These structures served as housing units for mill workers back in Bend’s heyday as a lumber town. They were hoisted by crane onto train cars and offloaded next to the tracks in mill camps scattered in wilderness areas surrounding Bend. 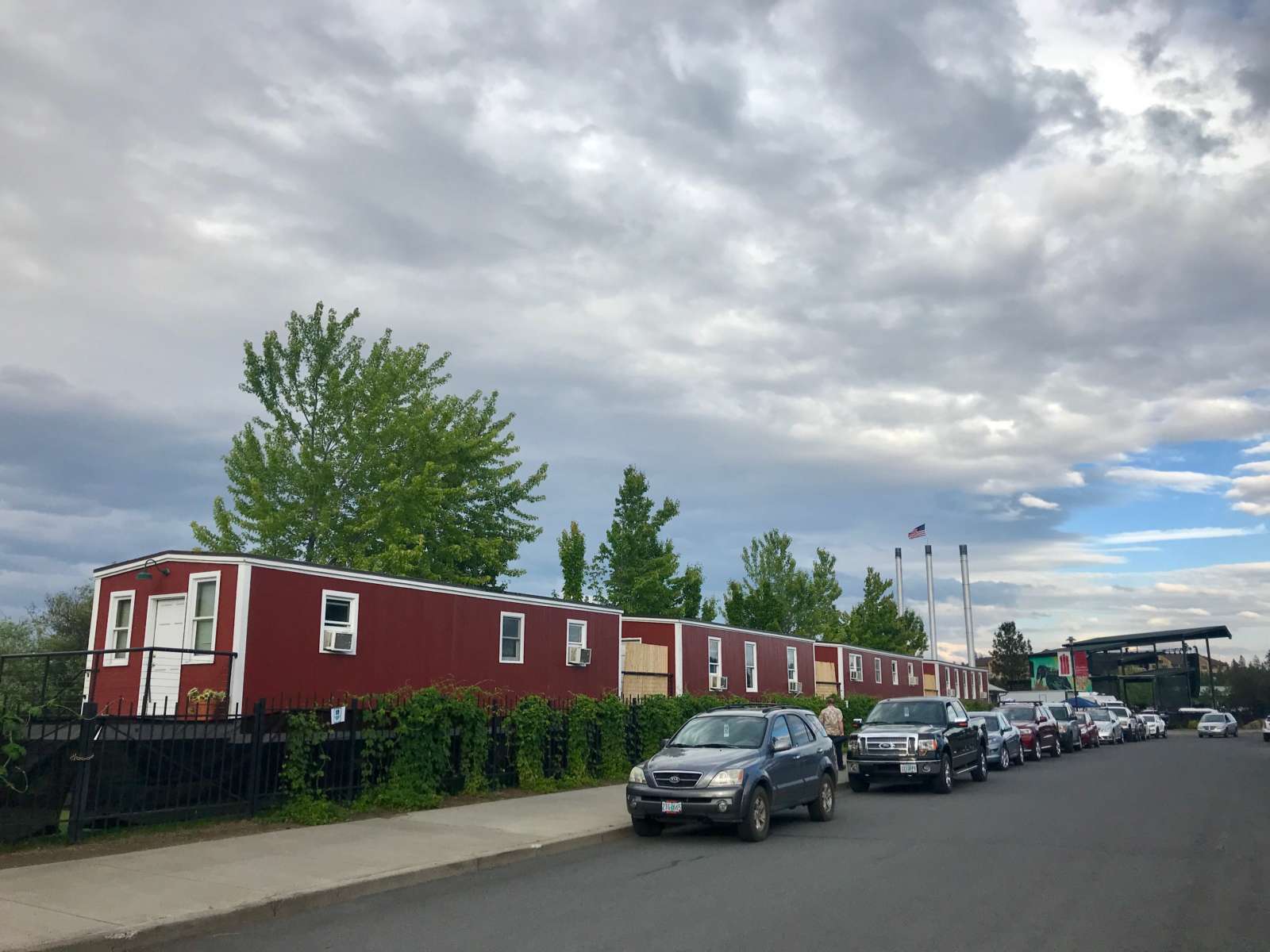 Restored camp cars in the Old Mill District are now used as green rooms for performers at the Les Schwab Amphitheater.

The original tiny home, these 14×20-foot structures housed millworkers’ families and other necessities in the camps. Most had a wood stove in the middle, sleeping quarters on one half, and a kitchen/living area in the other half. A larger family might get two units, and everyone had to walk to community outhouses in the camp.

Where are they? Located in the Old Mill District next to the Les Schwab Amphitheater.

How old are they? Bend’s glory days as a milling empire spanned from 1916 through the 1950s, with Shevlin-Hixon and Brooks-Scanlon logging vast acres of Ponderosa pine and employing 2,000 workers apiece at the height of operation. These camp cars were actually owned by both mills at one time or another, having been bought by one and sold to the other.

What makes them cool? The Old Mill District acquired the rail cars between the 2003 and 2004 concert seasons and renovated them with help from Keeton Construction and Mountain View High School students. They now serve as green rooms for artists performing at the Les Schwab Amphitheater. One of the cars was actually Les Schwab’s childhood schoolhouse when he was growing up in the logging camps. 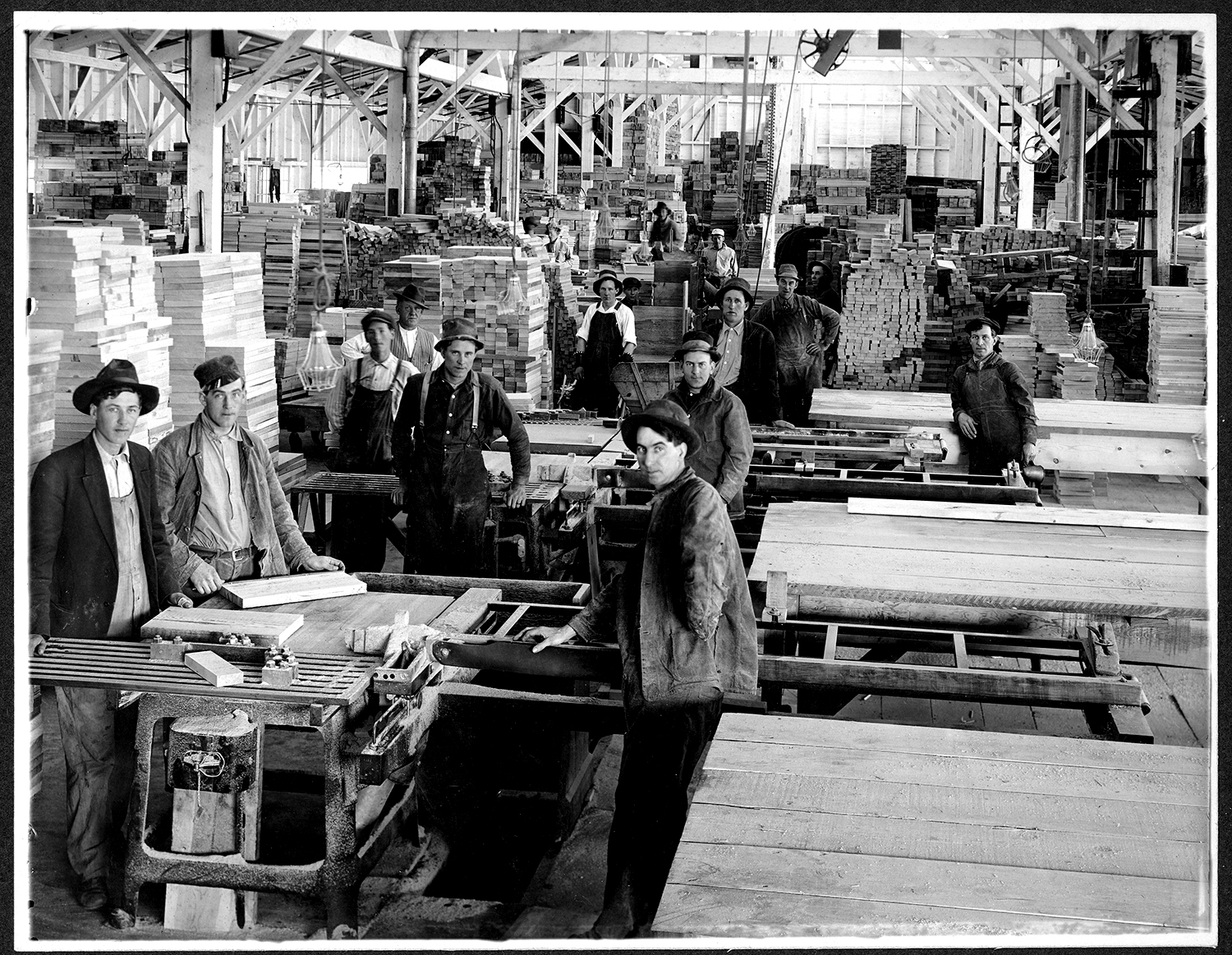 Workers in the Box Factory back when they really made boxes.

What is it? If you’re wondering what all those milled trees were used for back in Bend’s logging days, many became shipping boxes and crates. Thousands were produced in this factory, and major brands like Cream of Wheat and Sunkist Oranges had their goods transported in boxes made right here in Bend.

Where is it? The Box Factory is located between the Old Mill District and Downtown Bend on Industrial Way. 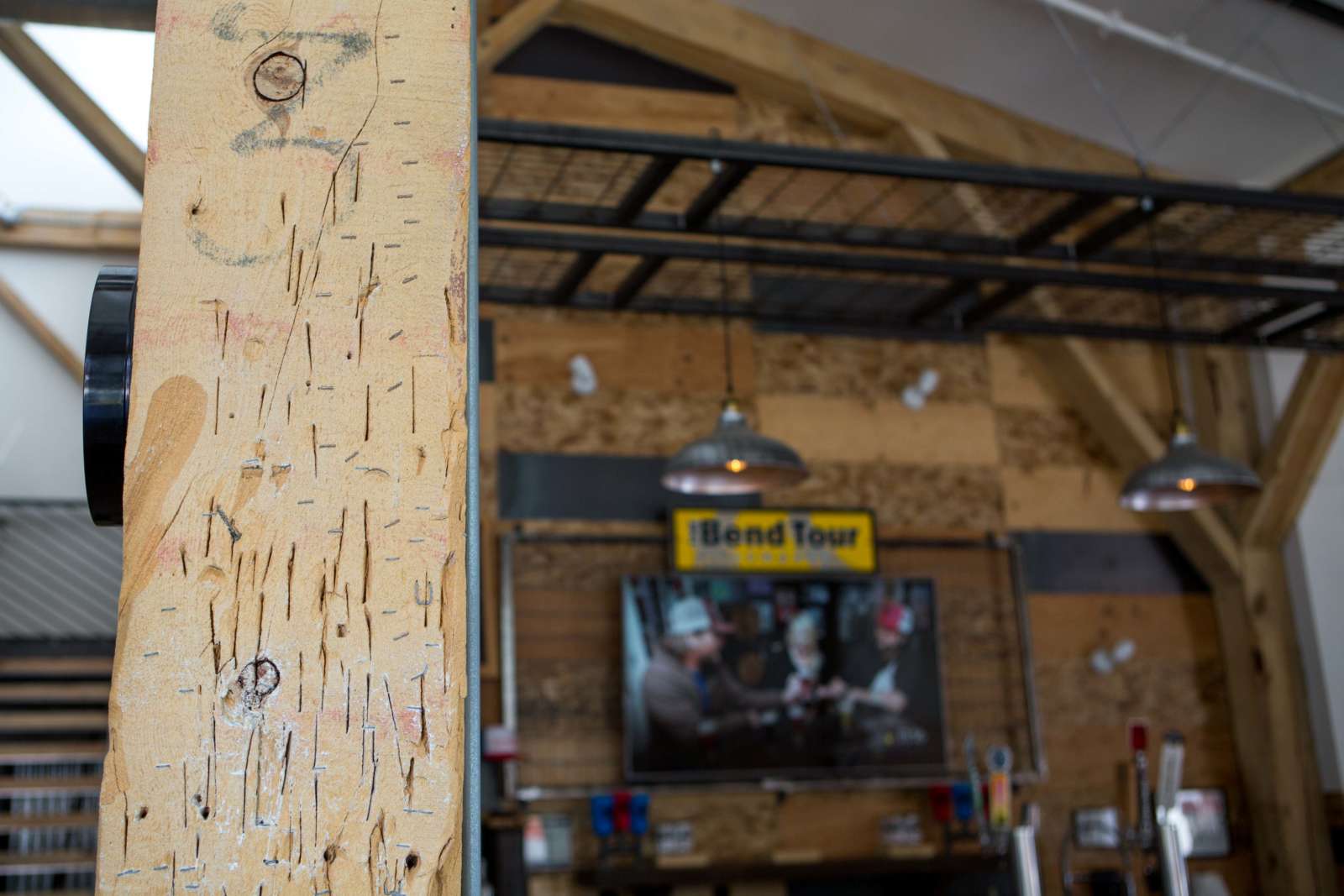 Hatchet marks remain on a pillar in the Bend Tour Company office in the Box Factory.
Photo by Toni Toreno of Bend Photo Tours

How old is it? The original Box Factory opened in June 1916, but the building was diced up and reconfigured several times to become the L-shape it is now.

What makes it cool? The current owners of the Box Factory have taken great pains to preserve its historical features while remodeling the facility to hold more than 30 businesses including brewpubs, fitness studios, art and interior design showrooms, boutique retailers, a tour company, and even a tattoo shop. Spend an afternoon strolling around to admire the hatchet marks in the pillars at the Bend Tour Company (it’s how the factory workers stored their tools) or the original sprinkler equipment at Iron Elephant Tattoo. Tenants at the Box Factory are all committed to preserving these little bits of history, so wander around for a unique glimpse of Bend’s early years. 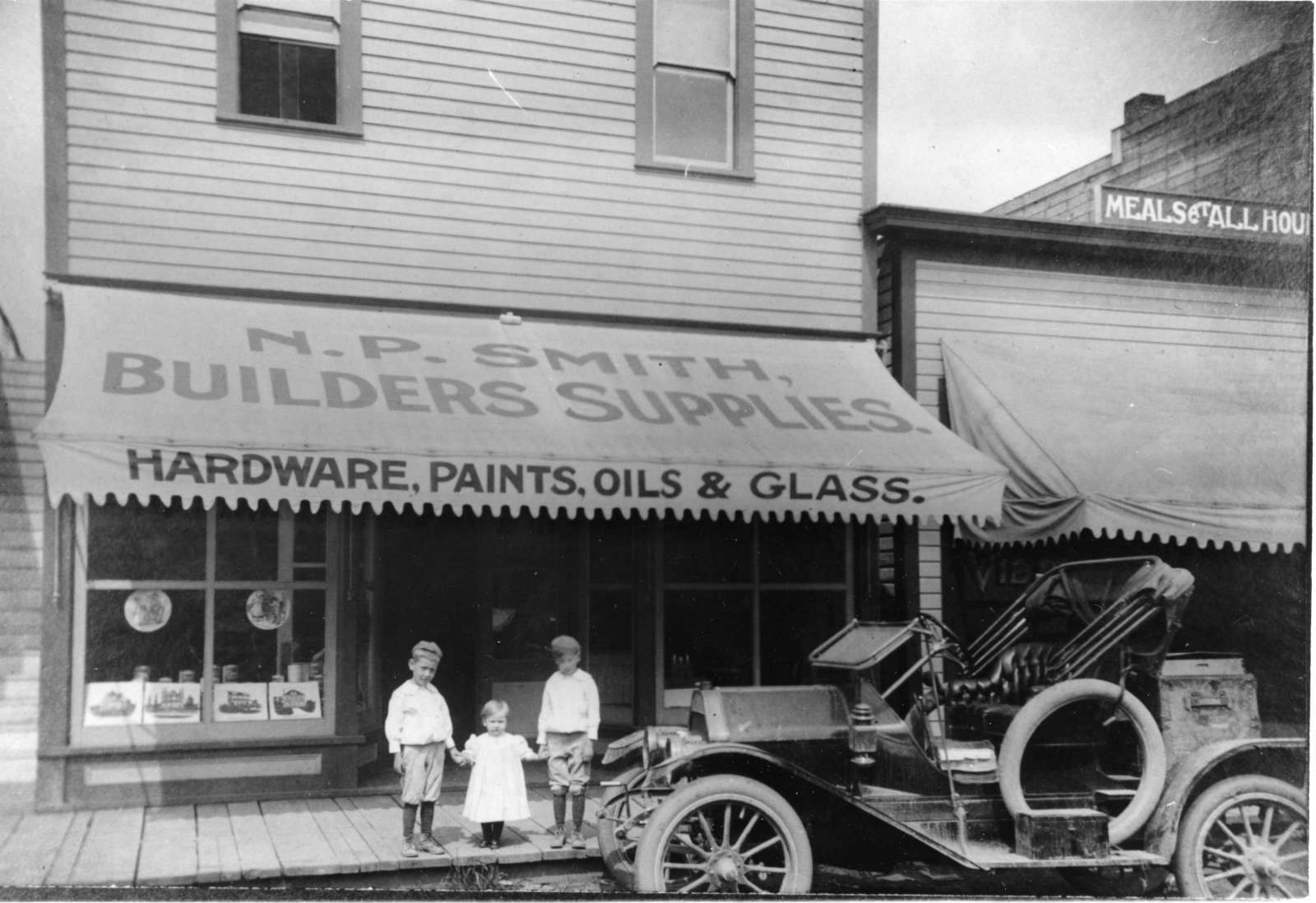 Smith Hardware, one of the oldest buildings in Downtown Bend. 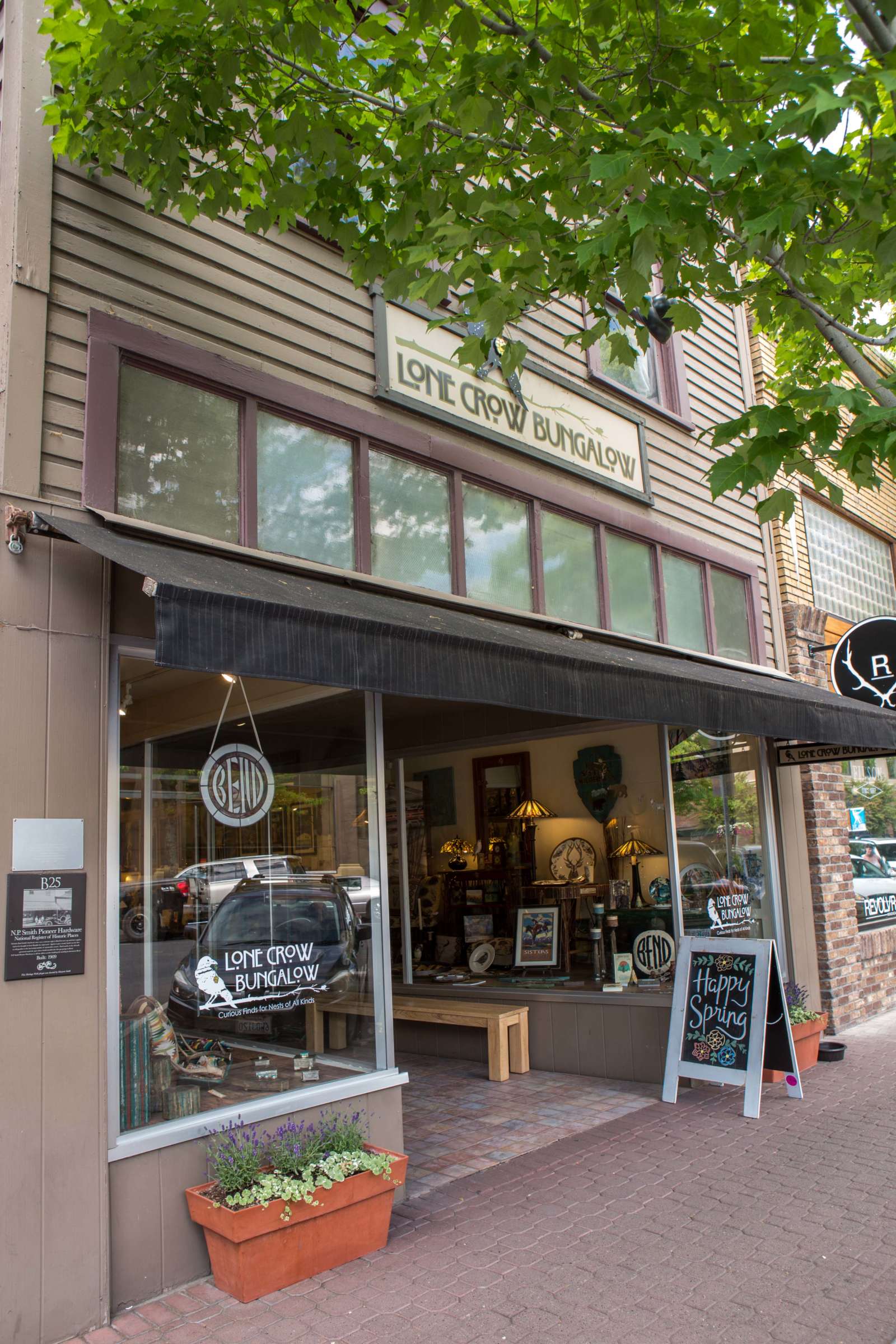 What is it? Lone Crow Bungalow in Downtown Bend is a shop that offers unique housewares, furnishings, and gifts, but the building has one heck of a history. Nick and Cora Smith moved to Bend in 1902 (three years before Bend’s incorporation) and built the structure to house Smith Hardware. They lived upstairs with their three kids, Marjorie (the first baby born in Bend’s first hospital), Elmer, and Leonard. Marjorie resided in the apartment above the shop until her late ‘90s and passed away in 2010 just before her 101st birthday. She willed the building to the Deschutes Historical Society, and there’s a plaque on the building that explains some of the history. You’ll also spot a cement block out front that once marked Bend’s first gas pump.

Where is it? 937 NW Wall Street in Downtown Bend.

What makes it cool? Many of Bend’s early wooden buildings were wiped out by fires that ravaged the town, but this one stood the test of time thanks to the ingenuity of Cora Smith, who would hang wet sheets out the window to keep the flames at bay. This building is a regular stop on the Historical Haunts tour put on by the Deschutes Historical Museum every Halloween, so mark your calendar if you like spooky stories. 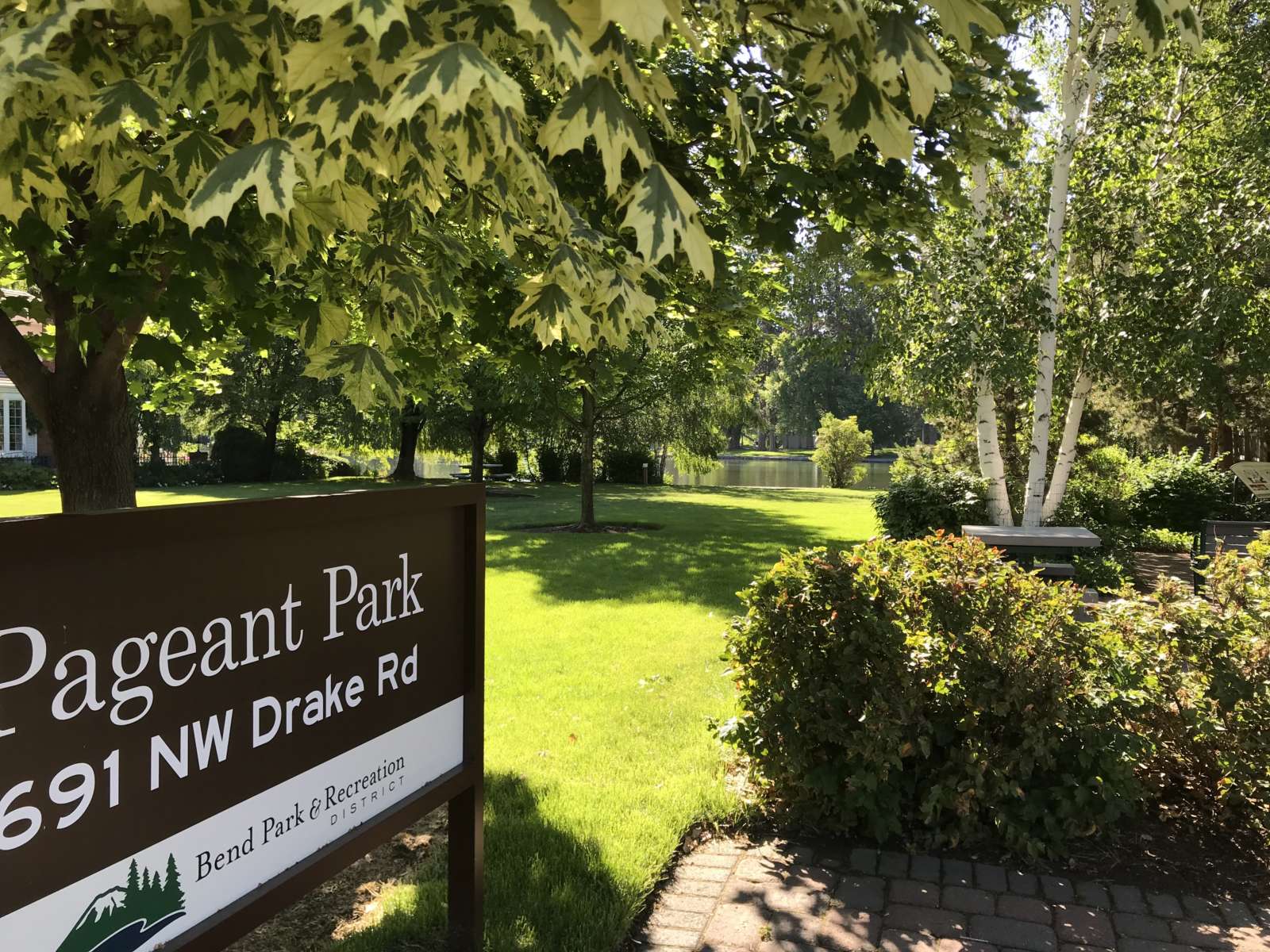 What is it? This itty-bitty pocket park celebrates the history of Bend’s Water Pageant. Back in the day, Bend’s founders would hold the pageant every July 4 as the city’s premier celebration. The pageant had its own royalty with a queen chosen from among princesses. Local businesses created massive floats like a sawmill with moving logs and windmills, or a replica of the state capital in minutia. Floats were anchored at the edge of the Deschutes and moved along a boom through Mirror Pond.

Where is it? Next to Harmon Park across the pedestrian footbridge from Drake Park.

What makes it cool? Pageant Park goes unnoticed by most visitors, who tend to be drawn to its flashier cousin across the river. It makes a great spot for a picnic, and you can read the plaque on site to learn more about the history.

What is it? One of Bend’s newest parks, Riley Ranch Nature Reserve is the site of the oldest homestead in Bend’s city limits. Ovid B. Riley and his family farmed and raised cattle, building a number of cabins and outbuildings. Not only can you still see remnants of those buildings, but also a prehistoric rock shelter once occupied by natives of the area. 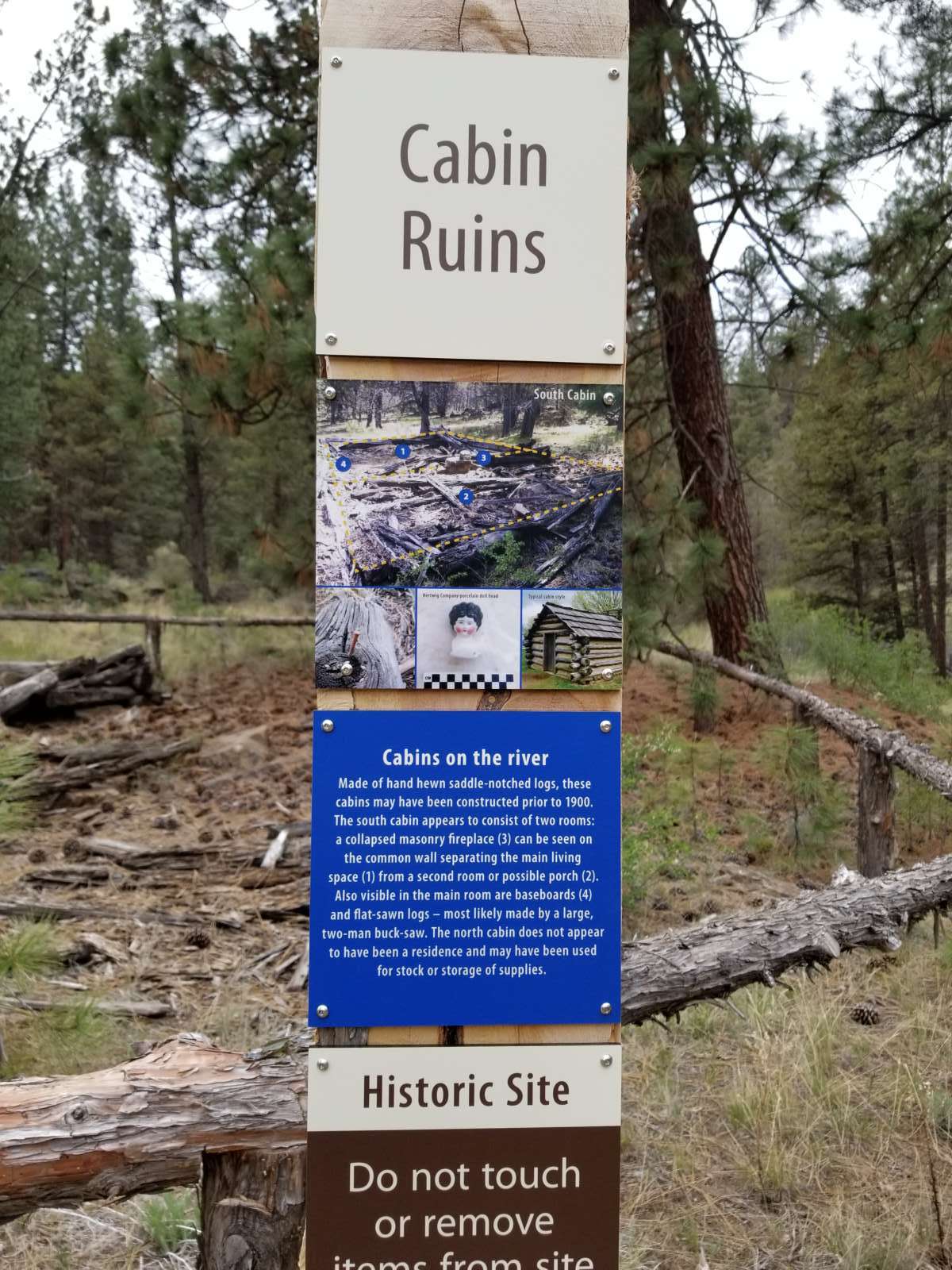 Some of the historic ruins in Riley Ranch Nature Reserve.

The park spans 184 acres including 35 acres of canyon floor along the Deschutes River and a 30-acre band of rimrock cliffs. The land appears relatively untouched in many areas, and includes open meadows, juniper and pine forests, unique lava flows, and many native plant species.

How old is it? The original homestead dates back to 1901

What makes it cool? Unlike other Bend parks, Riley Ranch is a nature reserve. That means it’s off limits to dogs and bikes, and parking is limited to help maintain the serenity and solitude of the area. This is a great place to see all kinds of wildlife, including birds and deer.

Hollinshead Barn and the caretakers’ cottage 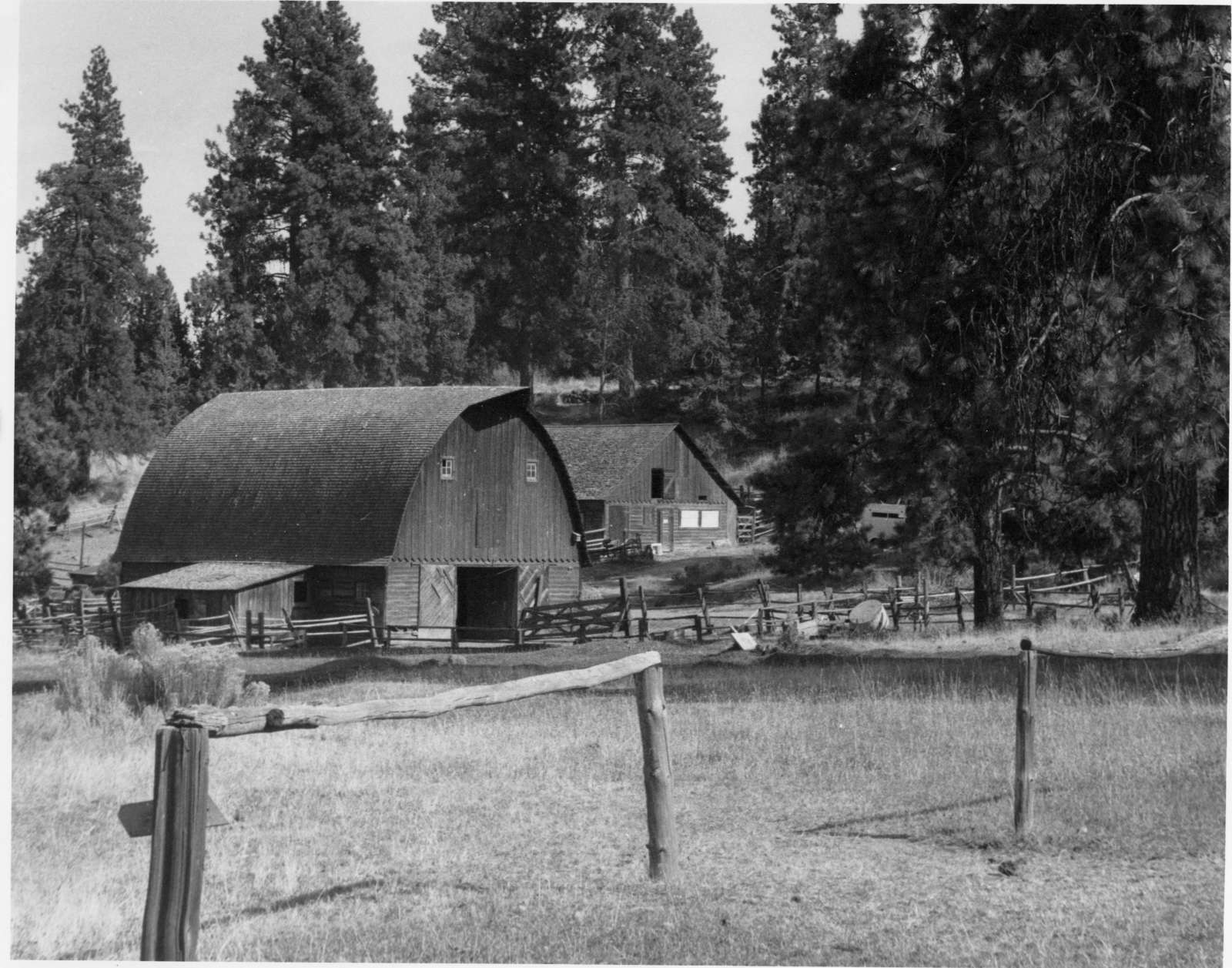 Historic Hollinshead Barn and some of the outbuildings.

What is it? Once upon a time, Hollinshead Park in northeast Bend was a working ranch with horses and orchards, barns and outbuildings. Some of those buildings still stand today, including Hollinshead Barn (a popular site for events and weddings) and the caretaker’s cottage, which Bend Park and Rec opens up once a year for tours. Stroll the grounds on your own to check out some of the remaining structures like the restored outhouse and items from Dean Hollinshead’s family freight line business from the early1900s.

What makes it cool? The 16.5 acre park includes an off-leash dog area, picnicking, and open fields, but it’s especially cool to admire the community garden area, which pays tribute to the years this property was a working farm. 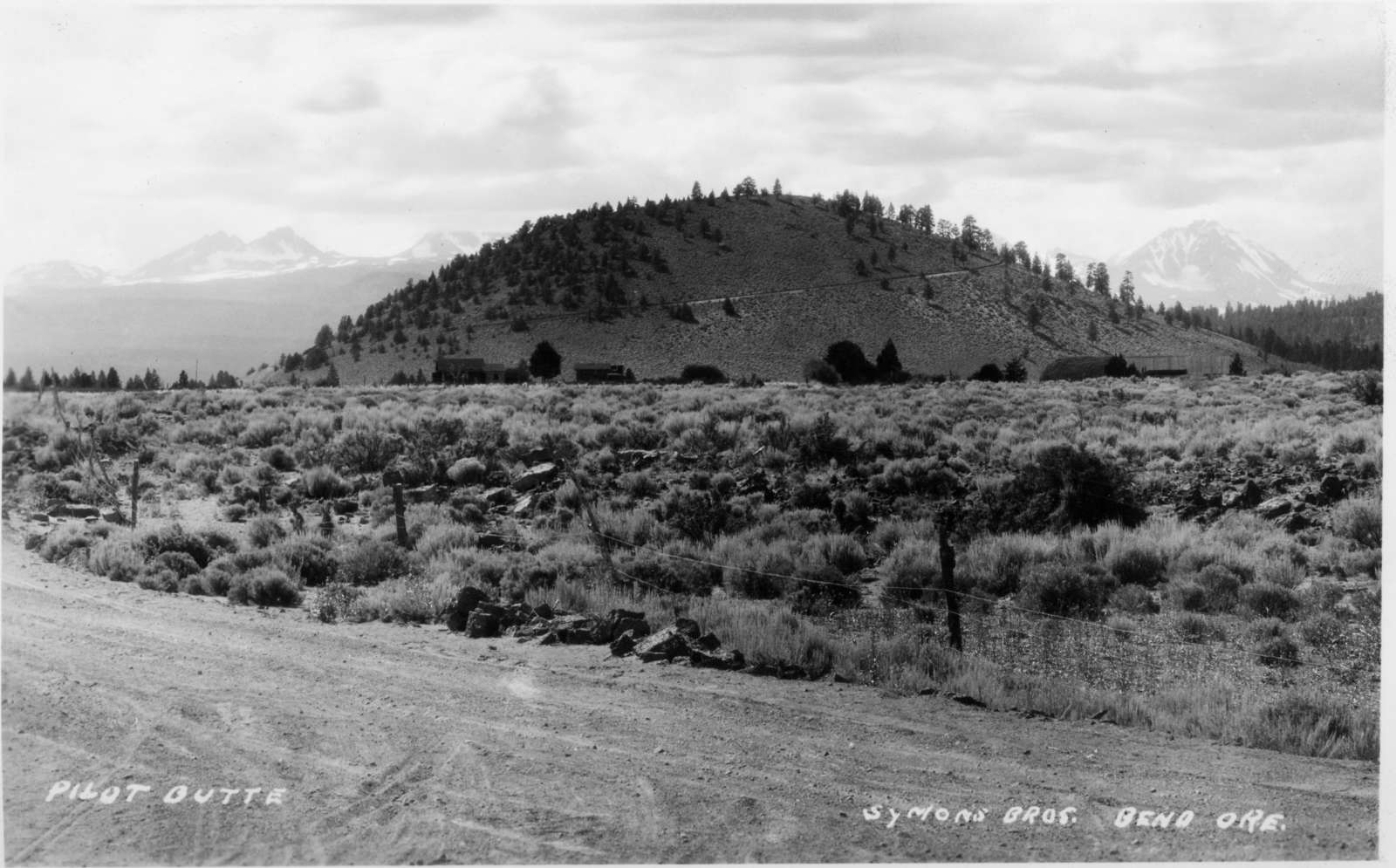 Pilot Butte as it looked before Bend was even a town.

What is it? Bend is one of the only cities in the continental U.S. that boasts a dormant volcano right in the middle of town. For hundreds (heck, thousands) of years, Pilot Butte served as a beacon and a landmark for settlers and for native people before them. 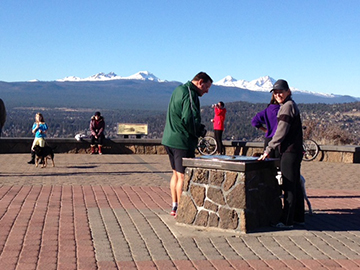 Modern visitors study the marker on Pilot Butte that points out the mountains viewable from the top.

What makes it cool? Hike to the top (or drive when the road is open in warmer months) for spectacular views of Bend and surrounding areas. It’s a great way to orient yourself to the city, and markers at the top will give you more history of the area and point out the names of all the mountain peaks you’ll see on the horizon. 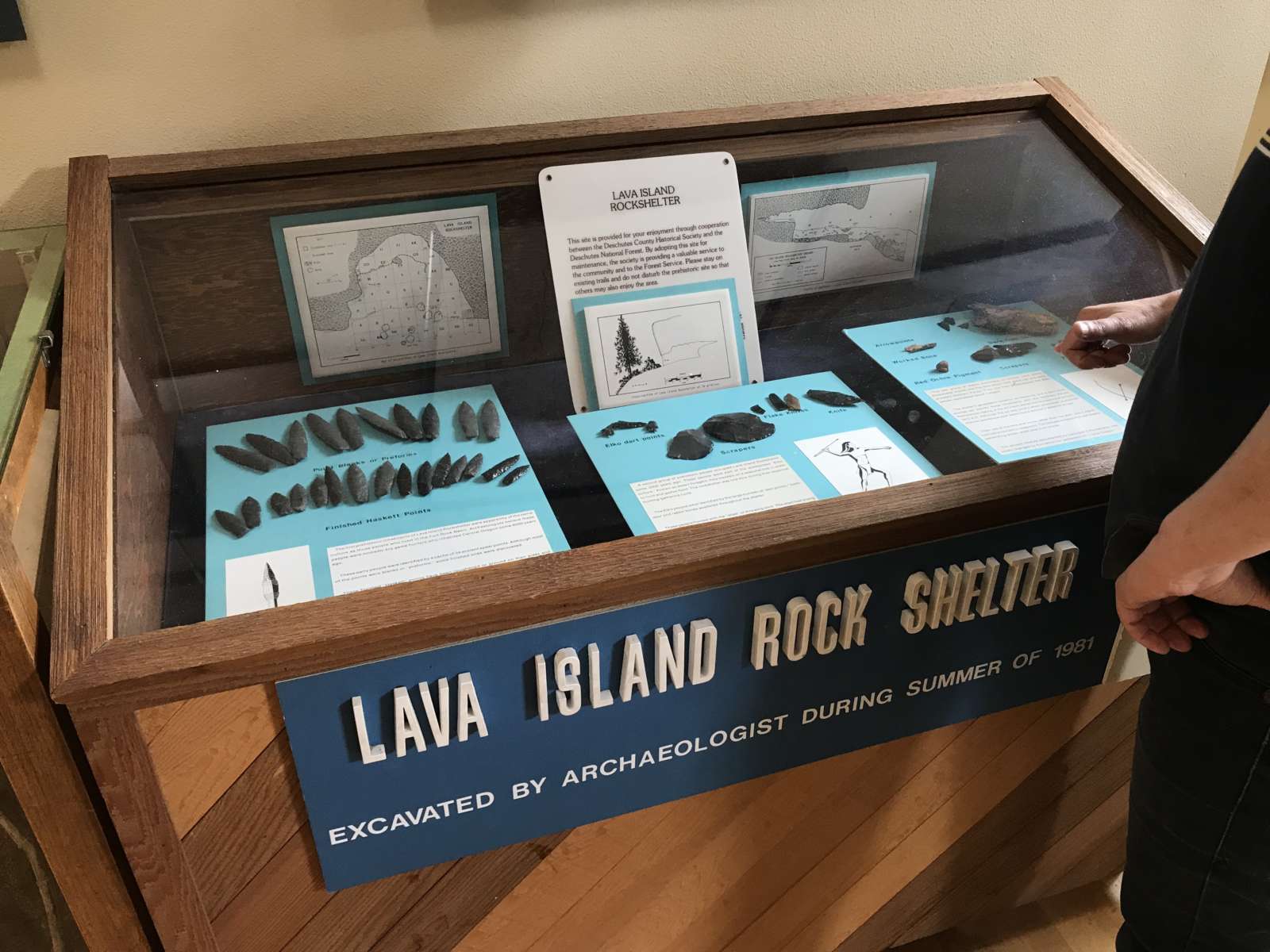 A display at the Deschutes Historical Museum shows some of the native artifacts found at the Lava Island Rock Shelter.

What is it? In 1981, professional archeologists working with the U.S. Forest Service excavated Lava Island Rock Shelter and restored this native site. Using artifact typology and obsidian hydration, archeologists were able to unearth and preserve many native artifacts. The first prehistoric inhabitants here were nomadic big game hunters of the same culture as those residing in the Fork Rock Basin. A second group of prehistoric people inhabiting the area roughly 2,000 years later were part of the widespread Elko Culture and were known as desert foragers. The rock shelter was one of their stops during their seasonal hunting/gathering cycles. The last group of Native Americans to occupy the shelter moved into the area about 1,000 years ago and were probably Northern Paiute. They were also skilled foragers.

Where is it? Access it from the Lava Island Day Use Area along the Deschutes River.

How old is it? Archeologists estimate the site has been in continuous use for nearly 8,000 years.

What makes it cool? This is one of the few native sites in our area that you can visit up close and personal. Begin with a trip to the Deschutes Historical Museum to learn more of the history and get a glimpse of some of the Neolithic artifacts found there, including obsidian weapons and tools.