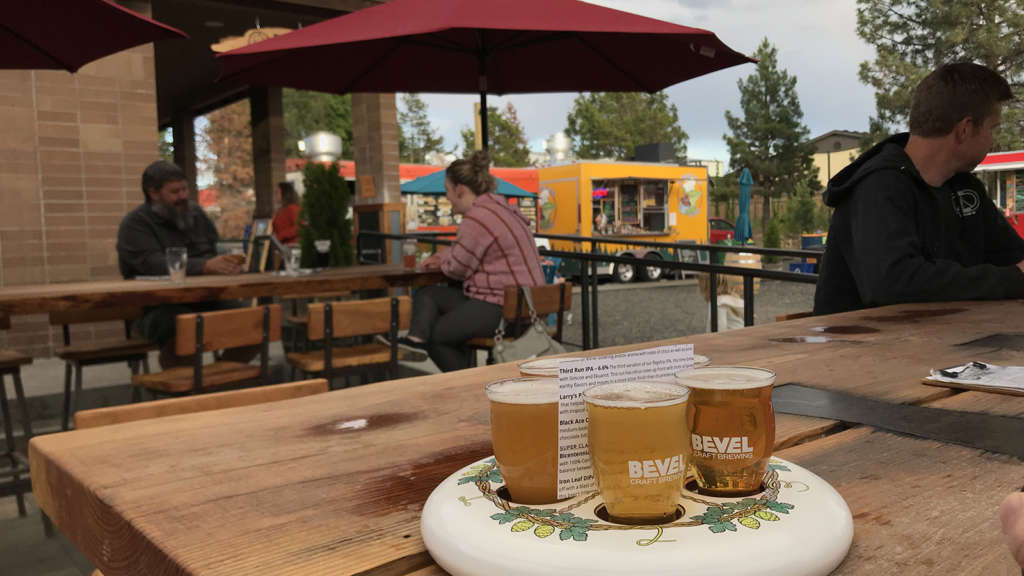 Bend’s busiest corridors are bursting with award-winning restaurants you’ll read about in Yelp reviews or spot easily while strolling Downtown Bend or the Old Mill District.

But what about those hidden gems? The special dining spots a bit off the beaten path that are worth the extra effort it takes to find them.

Unless you’re shopping at the Cascade Village Shopping Center, you won’t likely stumble upon Moose Sisters. 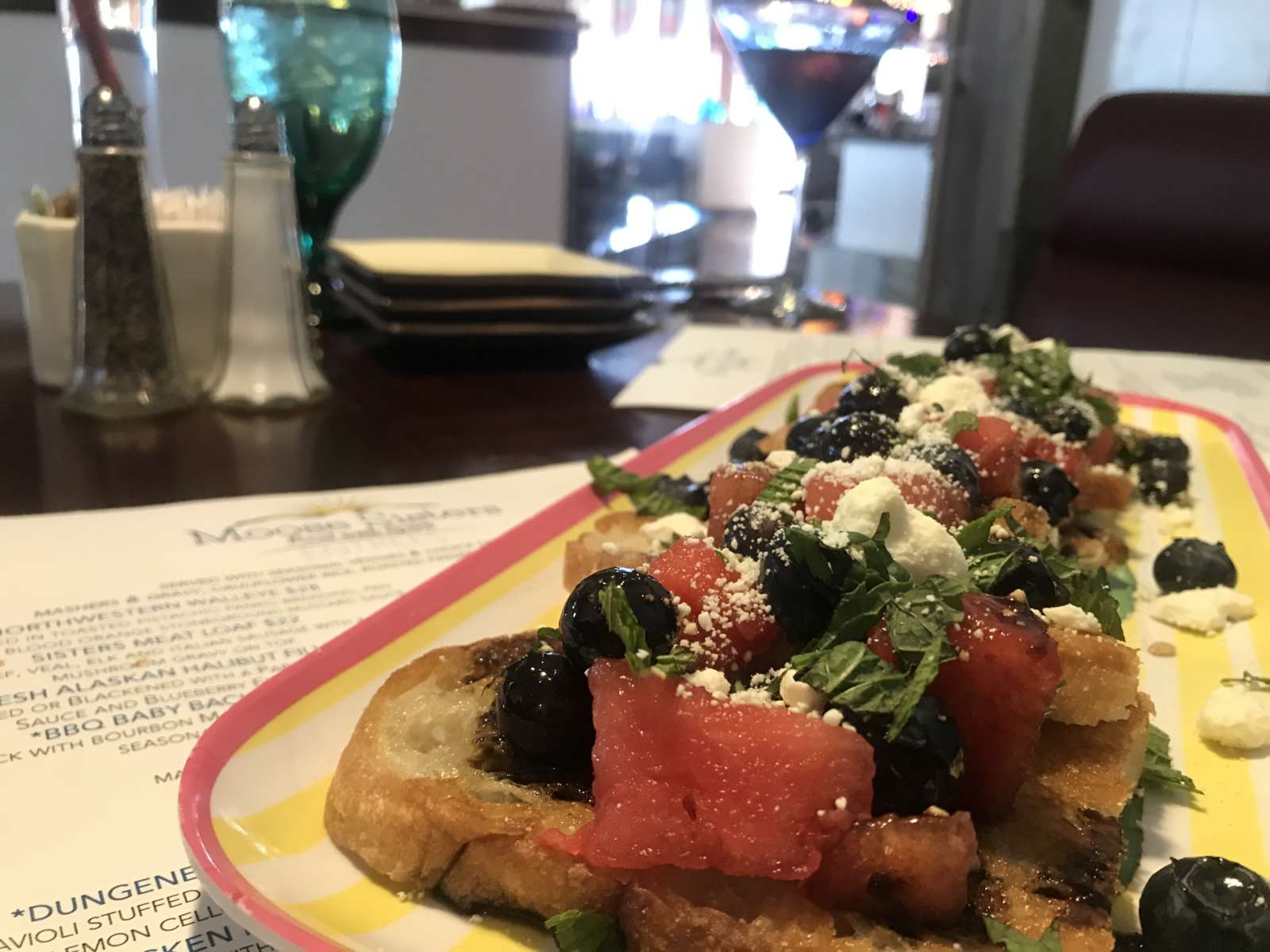 Heck, you’re unlikely to spot it even if you are shopping there, but it’s worth a trek up the stairs to discover this buried treasure above Jamba Juice and across from the fountain/fire pit.

Once there, you’ll find killer mountain views and an exceptional cocktail list. Start your meal with a taste of summer by ordering the watermelon bruschetta made with blueberries, watermelon, fresh mint, and feta served on Tuscan bread and drizzled with cherry balsamic reduction.

Entrees run the gamut from seafood specials like Dungeness crab ravioli to more traditional fare like pan-seared pork chops or fried chicken. All are equally delicious, with hearty portions and quick service.

Prices are comparable to what you’d expect to pay at a mid-to-higher-end Downtown Bend restaurant, but if you grab a spot near a window, you’ll get mountain views worth a lot more than that. Save room for dessert, since their key lime pie is epic.

This funky little turquoise eatery on Greenwood Avenue is hard to miss, but only if you know where to look. Los Jalapeños is itty-bitty inside, but their menu packs a big punch in terms of tasty, authentic Mexican fare and happy hour specials to leave you swooning. 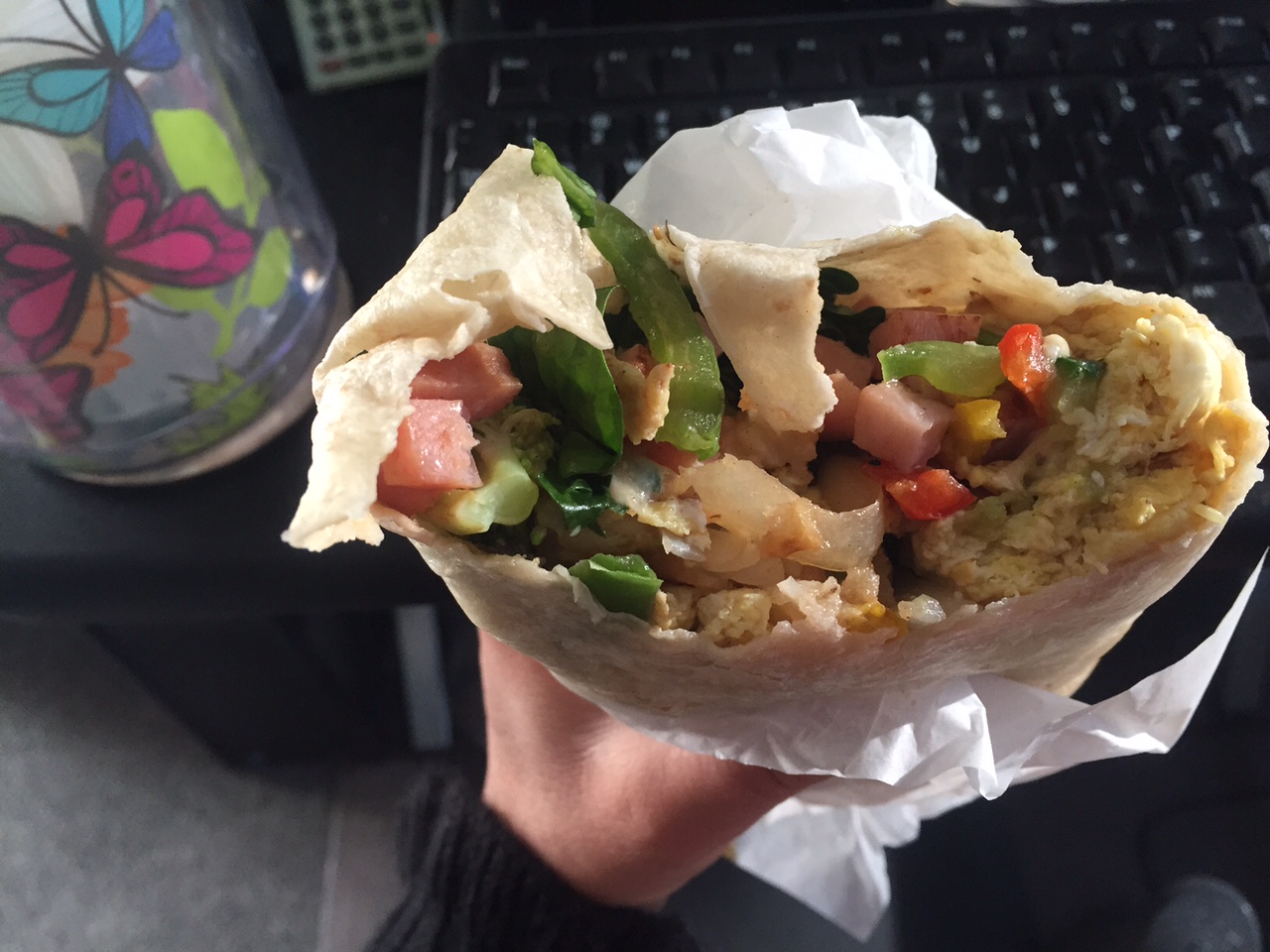 One of the tastiest, heartiest, freshest breakfast burritos you’ll ever eat can be found at Los Jalapenos.

They’ve also got plenty of tasty lunch and dinner options, from tacos to chile rellenos to a variety of seafood picks, and naturally, they’ve got scrumptious margaritas to wash it all down.

Seating’s a bit limited, so this isn’t the place to come for a huge family group unless you’re up for sprawling around their sunny patio. Come to think of it, that’s an awesome idea.

Perhaps the most hidden stop on the Bend Ale Trail, Craft Kitchen & Brewery is worth the effort it takes to trek to the north side of Bend and venture to its cozy Layton Avenue location. 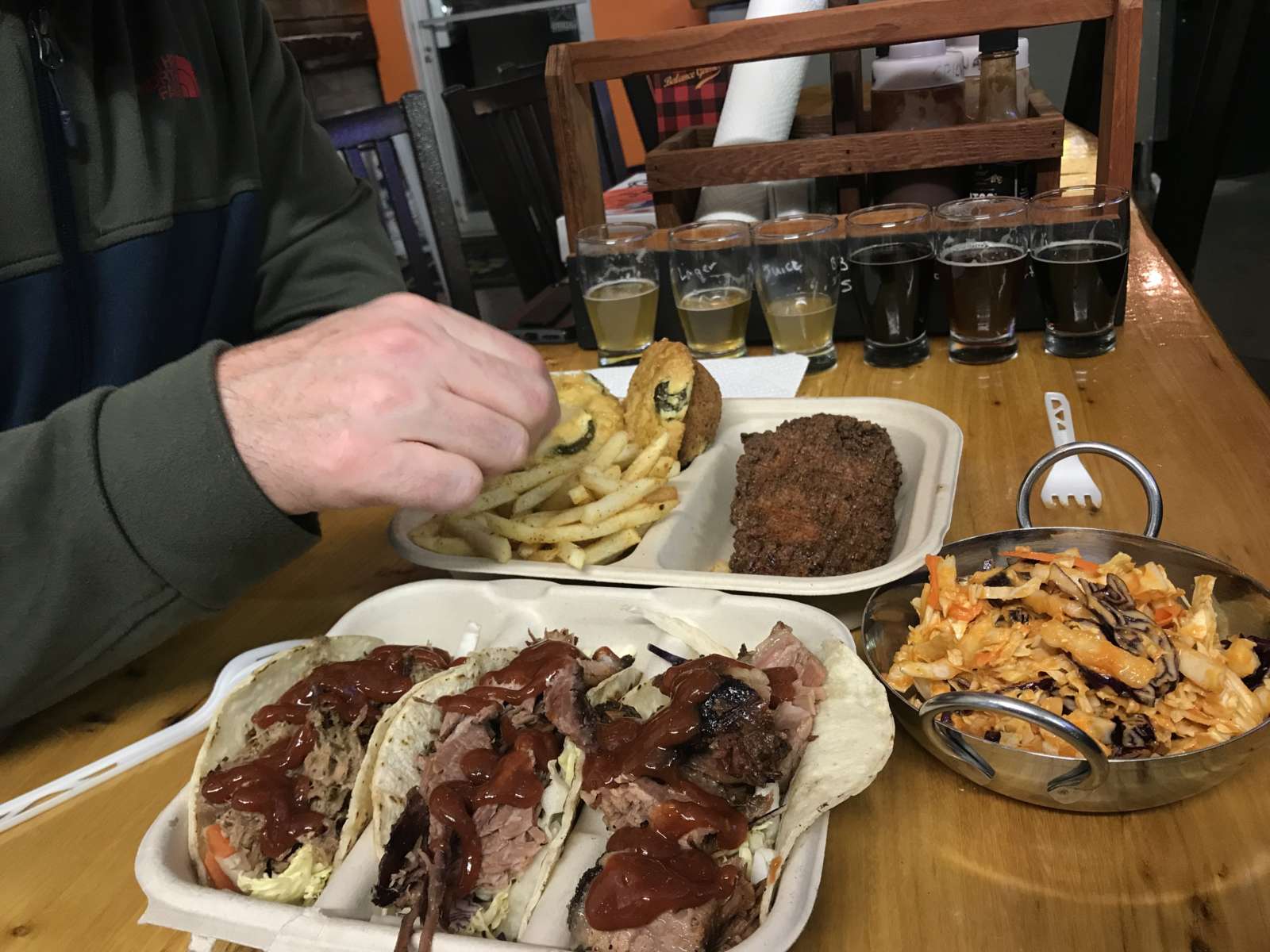 The Napa Slaw at Craft is the perfect complement to their tasty tacos or barbecue specialties.

There’s a food truck outside where most of the smoked and barbecued meats are prepared, but you can order both food and drinks at the counter inside.

Their Juice is Loose IPA is wicked good, and pairs great with their pulled pork or brisket. As a side, consider grabbing their Napa slaw, which is made with finely-shredded Napa cabbage, red cabbage, and carrots tossed with a housemade remoulade vinaigrette that’s a mouthwatering mix of roasted red pepper, shallots, garlic, lemon, and paprika.

Also keep an eye on their event calendar for fun happenings like standup comedy and open mic nights. It’s a great excuse to get off the beaten path and grab a Bend Ale Trail stamp in a quieter part of town.

Downtown Bend has no fewer than three Thai eateries, and all of them are exceptional. 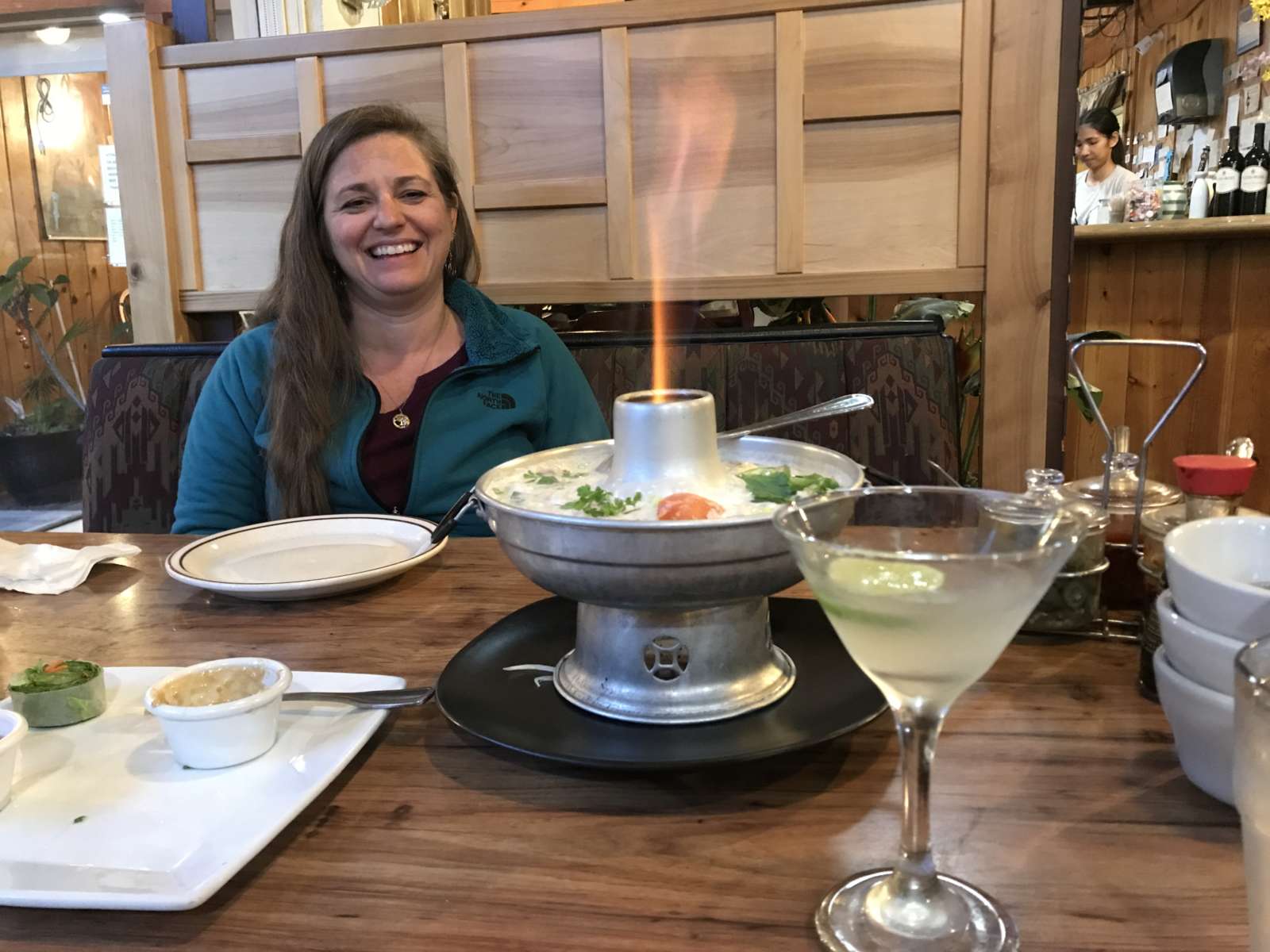 But if you’re looking for something with a homey, cozy vibe that’s a bit off the beaten path, venture a wee bit north to Orchid Thai on NE Division.

Their family-style Tom Kha soup is a belly-filling concoction served in a big metal bowl over an open flame. From curries to eggrolls, everything tastes as though you’re eating a family meal at someone’s home, and the wood-paneled interior makes it feel like that (in the best possible way!)

They’re well-known locally for their delivery service, so this is a great place to ping if you feel like sticking around your Bend hotel or vacation rental and having food brought to you.

Thai on the Fly

At the risk of having two Thai places in one roundup, I’d be remiss if I didn’t include A Taste of Thailand on this list. 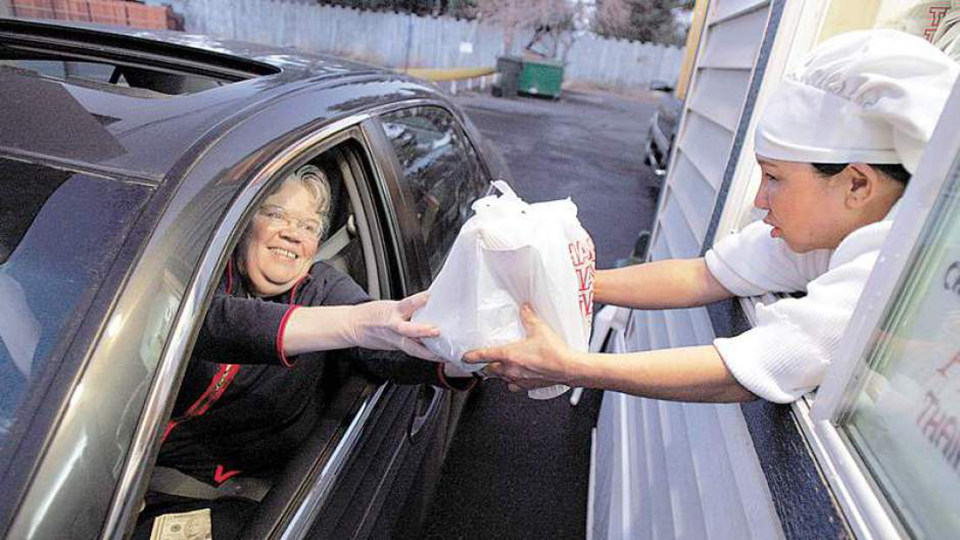 Get tasty Thai to go at Thai on the Fly.

Best known by locals as “Thai on the Fly,” this little drive-through food cart has been a Bend staple for more than a decade. You’ll find super-scrumptious Thai food and some of the friendliest service in town.

There’s no dine-in option here, but you’ll be treated like royalty as you cruise your car through the line and accept a bounty of free samples to help with your decision-making. The Thai fresh rolls are always a tasty starter, and any of their pumpkin curry dishes will leave you satisfied. 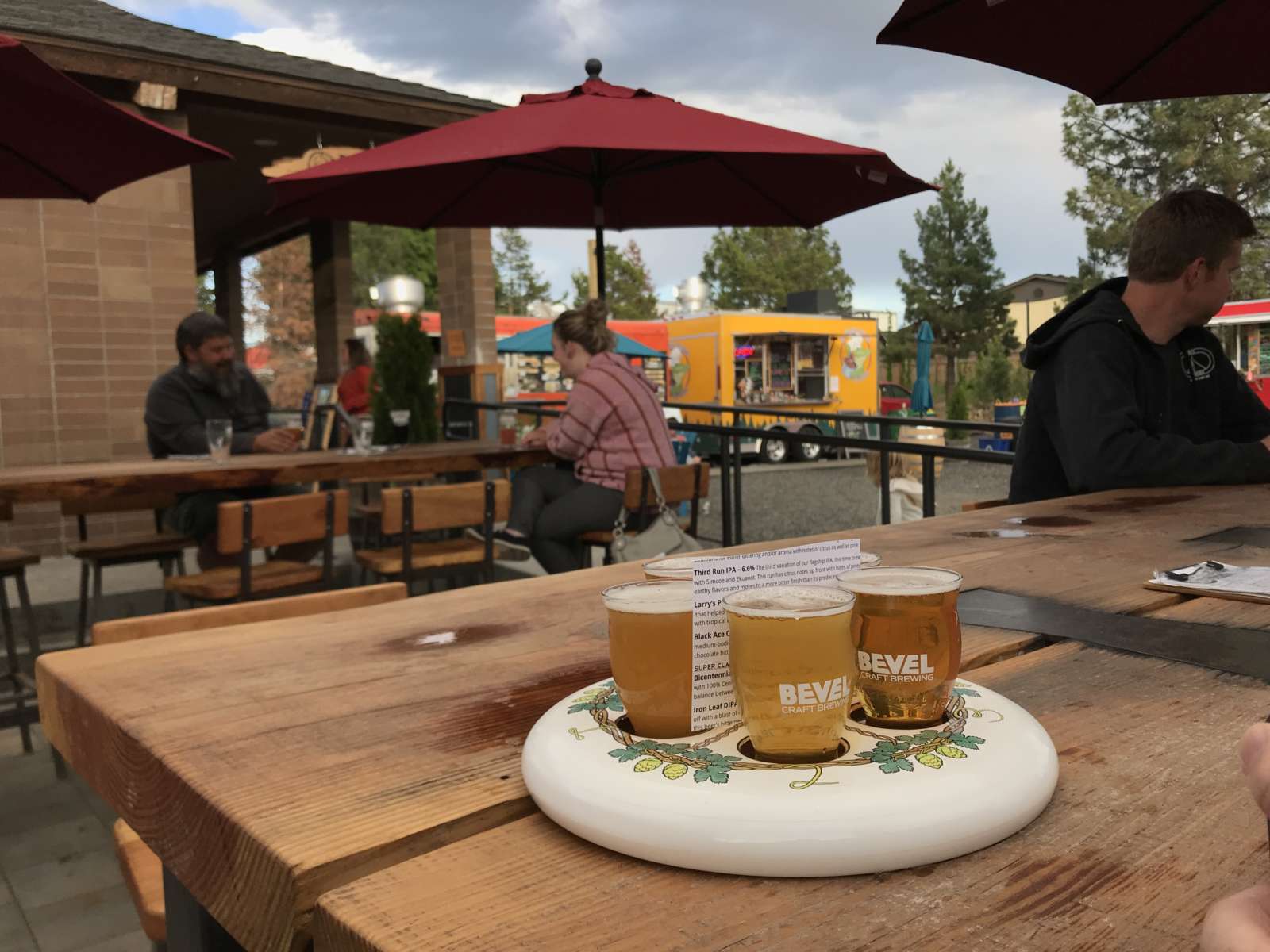 Enjoy the sunny courtyard (not to mention the food!) at Bevel Brewing.

One of Bend’s newest breweries on tap, Bevel Craft Brewing has a unique disc golf theme and some astonishingly awesome beer for a brewery that’s only been around a short time.

Located in an industrial area near Bend High, they’re part of the new 9th Street Village center that’s growing rapidly. While they don’t have a kitchen attached to the brewery, they do have a collection of four tasty food carts lining the spacious outdoor patio featuring a small disc golf hole (because of course).

The vibe here is uber-casual and friendly, and you won’t find the kinds of crowds that can pack some of the more established Bend breweries. What you will find are some terrific IPAs, plus an impressive selection of other beers. There’s even a canning station so you can take your faves home with you as a souvenir.

Visiting a gym is not high on most travelers’ lists of fun things to do while vacationing. 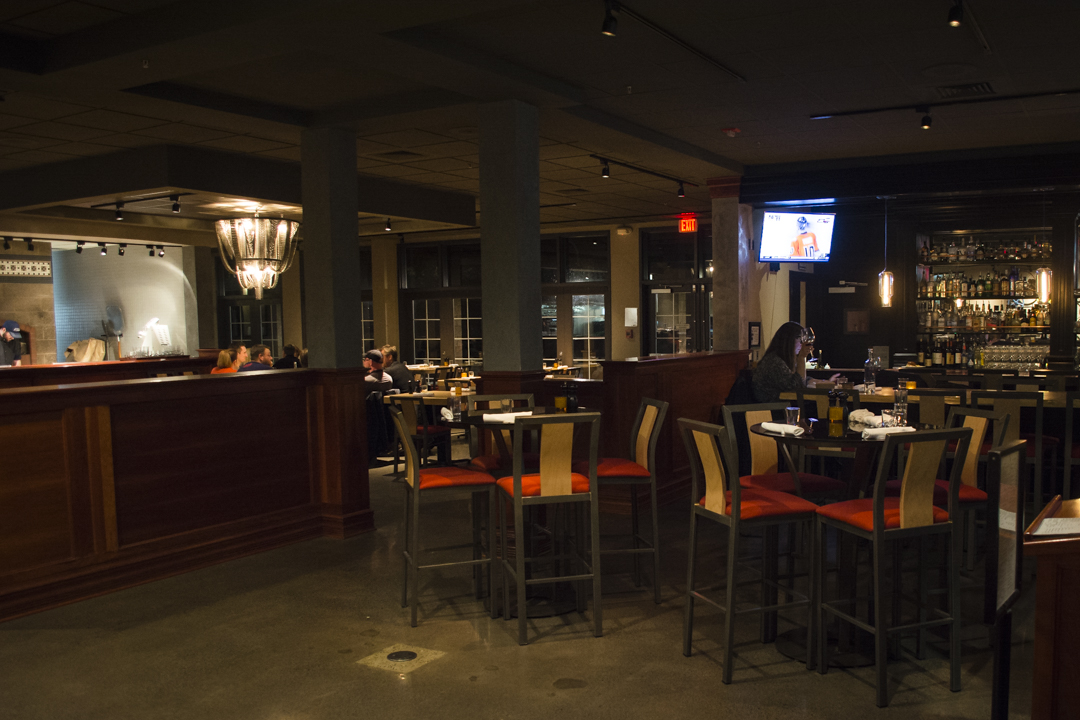 Hard to believe Bistro 28 is located in an athletic club, eh?

But most vacation spots don’t have the Athletic Club of Bend, or the popular Clear Summer Nights concert series that takes place there each summer.

It’s also home to Bistro 28, an outstanding eatery that happens to be run by the same folks that operate the popular Downtown dining hotspot, Zydeco. Why does that matter?

Many’s the time I’ve had a craving for Zydeco’s legendary barbecue shrimp, but didn’t feel like waiting for a table. Just a ten-minute drive can land me at a spacious table at Bistro 28 with a glass of wine in hand and an order of those exact same shrimp on the way to my table. Ditto that for the trout dip, as well as several other specialties I’ve come to know and love at Zydeco.

But Bistro 28 is still its own place with its own special vibe and several menu items you’ll only find here. For folks staying at one of the lodging properties on Century Drive, it’s an excellent way to get a phenomenal meal without the crowds or the drive into the center of town.

Aviation buffs: This is your happy place. 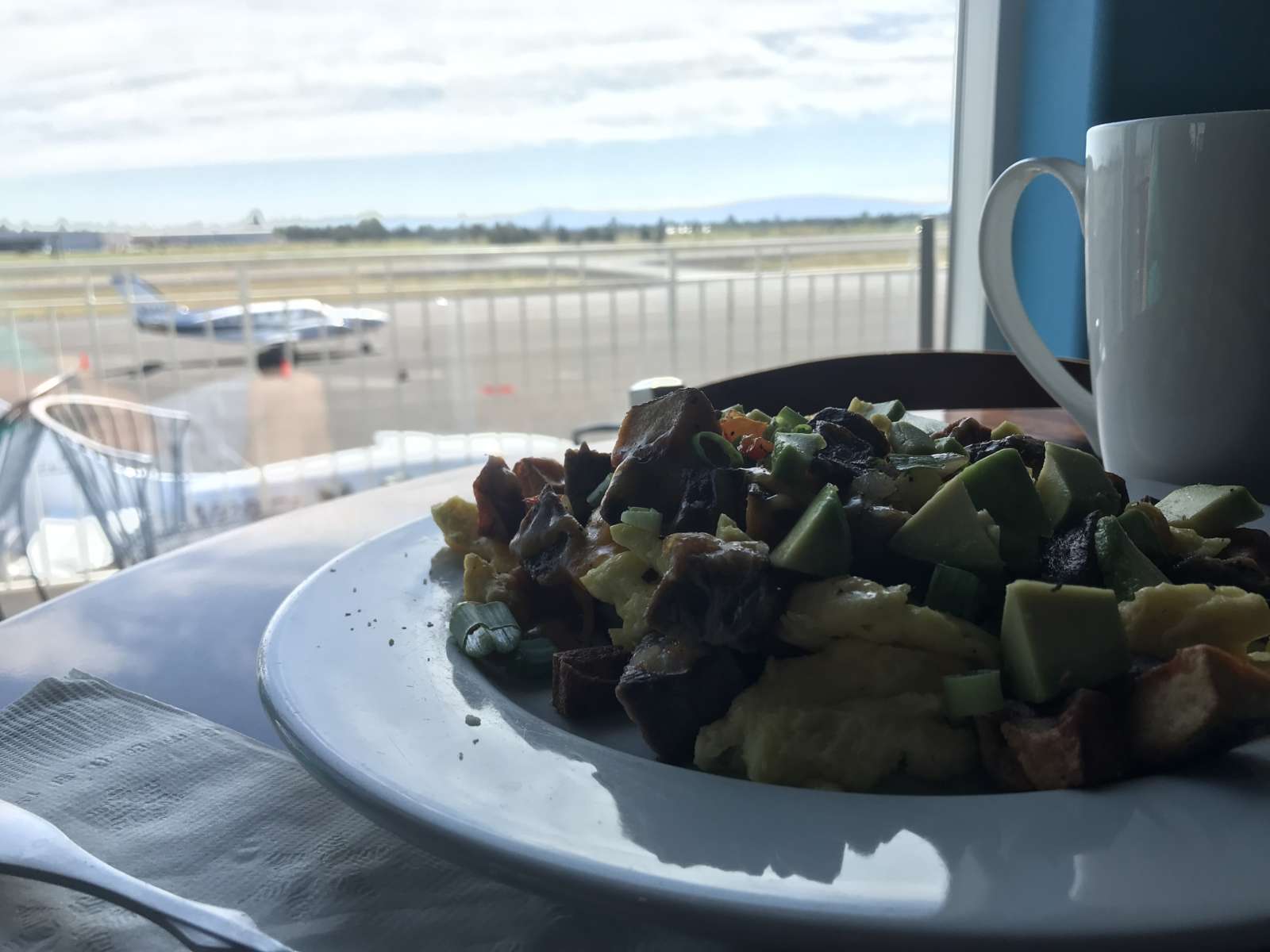 Enjoy your smoked prime rib hash with a side of airplanes at Pickled Pig.

The Pickled Pig makes its home at the Bend Municipal Airport, which is not the same spot you flew into if you came to Bend by air.

This is a much quieter airport on the east edge of Bend, and you can watch tiny planes zip in and out while enjoying some of the tastiest barbecue around. They serve breakfast and dinner most days, or watch for their special prime rib Friday nights featuring live music.

Bonus: You’re in a great spot to head out for a scenic tour with Big Mountain Heli. Happy flying!

One of the best-known dining spots on this list, The McKay Cottage has been a locals’ favorite for ages, and voted Bend’s best breakfast by The Source Weekly every year since 2010. 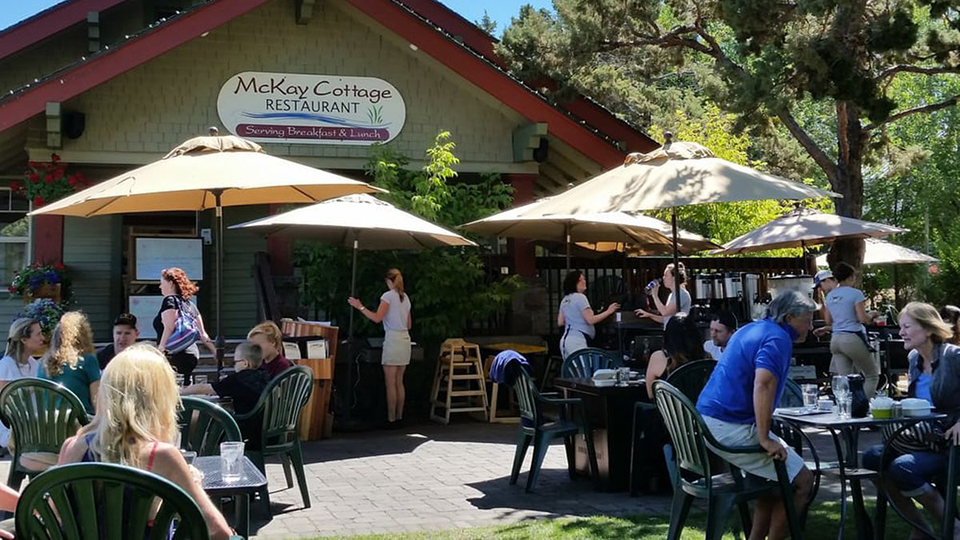 Score tasty chow and a charming atmosphere at McKay Cottage.

But it’s not one you’d stumble upon naturally unless you’d read their zillions of fab Yelp reviews and gone out searching for this quaint little restaurant on O.B. Riley Rd.

The McKay Cottage is nestled in a preserved 1916 historic craftsman bungalow, and serves up tasty comfort food and baked goods for breakfast and lunch each day.

Those craving sweeter brunch fare will swoon for their lemon ricotta pancakes with fresh summer berries. I favor their hashes and benedicts, which feature huge portions, scrumptious Applewood smoked ham, and heaping helpings of their fantastic breakfast potatoes.

Wait times here can be long, especially on weekends. It pays to arrive early, and to be okay with chilling in their grassy courtyard with a fresh cup of coffee in hand.