Bend concert season returns better than ever in 2021

Bend concert season returns better than ever in 2021

For folks who rank Bend’s summer concert season somewhere between “eating” and “breathing” on a scale of importance, last year’s COVID shutdown felt like a smack in the groin with a sockful of pennies. 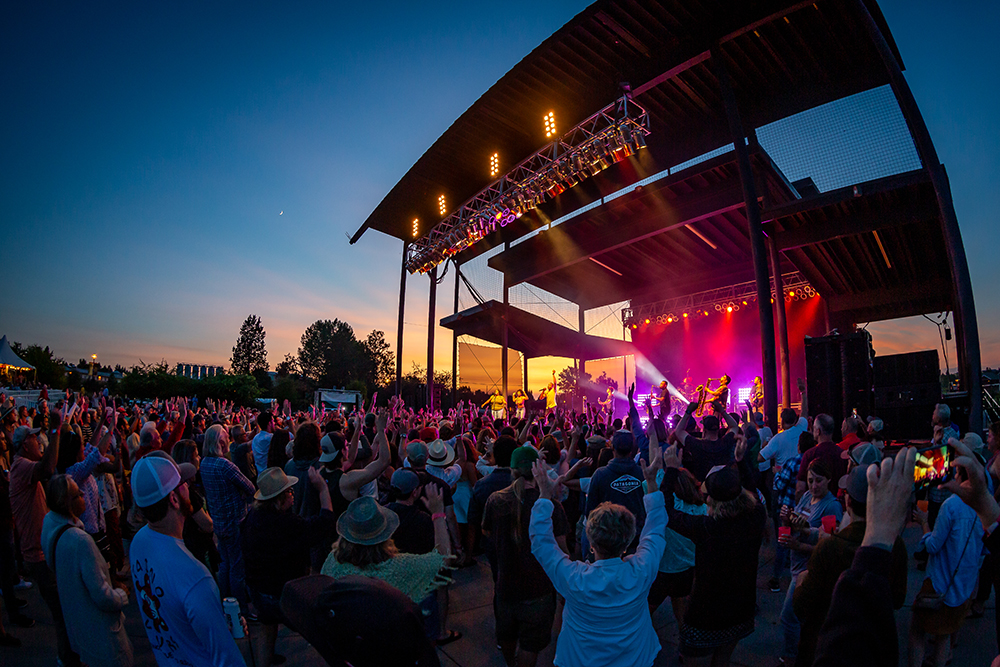 But Les Schwab Amphitheater shows are back and better than ever, which is sorta like eating cake while breathing fresh mountain air and dancing on a cloud with an armload of puppies and ohmylord, is anyone else crying now?

And I might be crazysuperbonkers excited about Bend’s 2021 concert season at the Les Schwab Amphitheater. Here’s what you should know as we all don our dancing shoes again.

More shows than ever

The 26-show lineup for the 2021 season smashes the previous record of 17 back in 2018. There’s way more variety in the mix, from country to reggae to folk to classic rock to multilingual orchestral-jazzy-poppy-world-music (lookin’ at you, Pink Martini).

What’s the reason for all this tasty ear candy? A few things.

For one, there’s the pent up hunger for live music we missed though the pandemic. We’re all eager for these concerts, and the Les Schwab Amphitheater deserves mad respect for fulfilling our fantasies. It’s worth remembering most of these acts lost a huge hunk of revenue for 18 months, which not only hurt artists, but blue collar lighting crews, roadies, concessions vendors, and folks hawking t-shirts. Be generous if you can, and help folks get back on their feet.

Another reason we’ve got so many new shows is Live Nation’s recent partnership with the venue. As the world’s leading live entertainment company, they’ve got the power to bring in acts we used to only dream of. The move makes Les Schwab Amphitheater the first Live Nation venue in Oregon and ensures funding for much-needed improvements in the future. 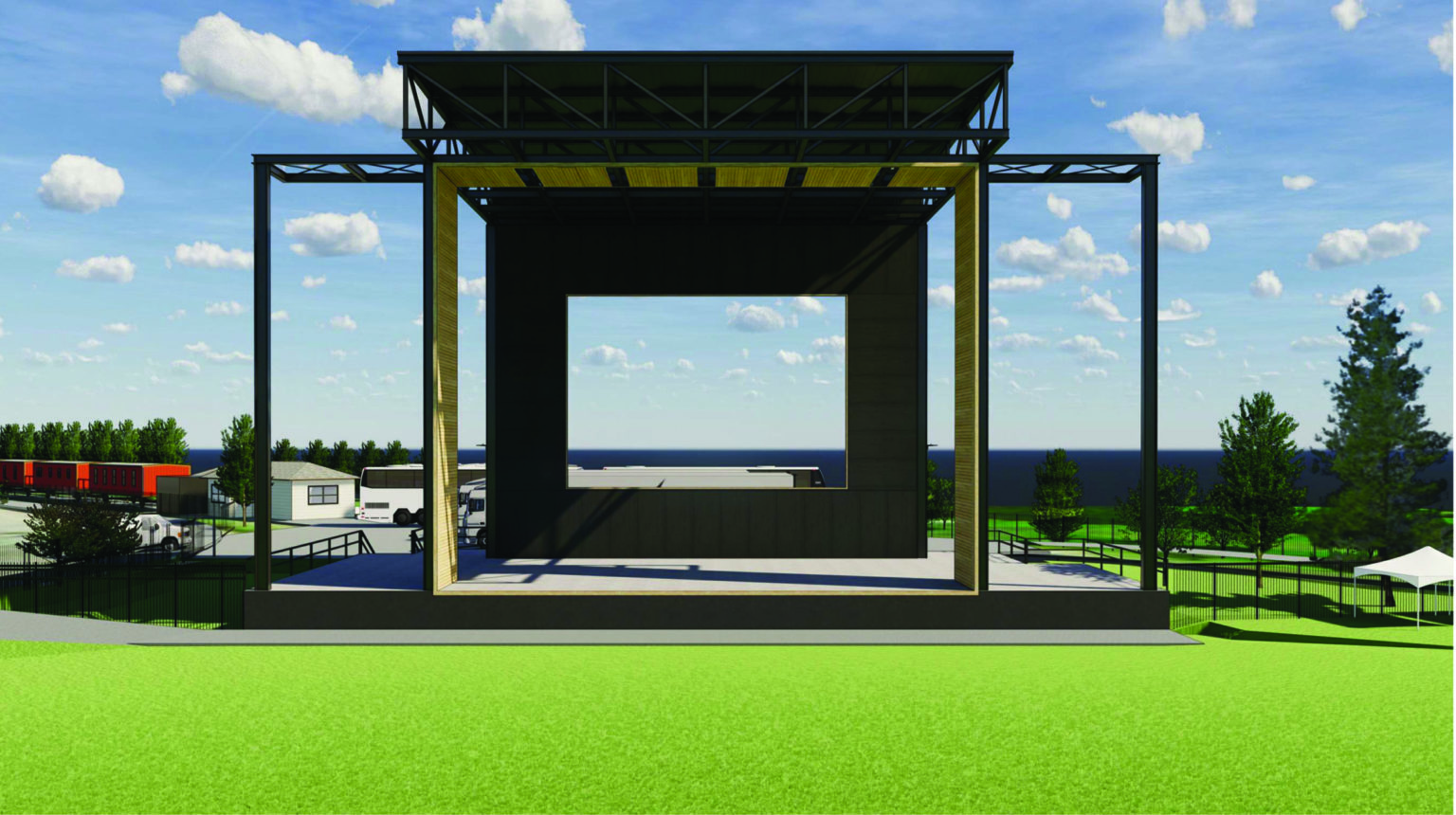 The artist’s rendering of the new Les Schwab stage, which will be ready in time for the first concert August 8.

The third reason we’re rockin’? The new stage! Here’s the skinny on that….

Check out that stage

It’s been almost 20 years since the Les Schwab Amphitheater held its first show, which feels like a lifetime ago. I remember sitting barefoot in the grass that first year, watching the river and thinking, “man, what a cool place for music.”

Nothing’s changed there, but the stage? It’s a whole new ballgame.

The venue spent COVID times renovating, with a much larger stage that’s now 62 feet high and brings an additional 1,840 feet in total stage footprint. Why does it matter? In past years, bigger acts would pass on performing at Les Schwab when they learned the venue couldn’t accommodate their rigging (think lights and speakers). But the new stage brings us up to snuff with larger venues, launching Bend from the minors to the big leagues.

The new stage has a minimalist design with pine accents that pay homage to Bend’s sawmill history. There’s also a new fully ADA-compliant (Americans with Disabilities Act) pathway from the ADA gate that spans the entire venue.

There’s more to come once this season’s over, with improvements slated for re-grading the venue, adding box seating and semi-permanent restrooms, and establishing permanent food and beverage options. Rumor has it next year’s lineup is on track to exceed this year’s, so we’ve got gobs of great music on our horizon. 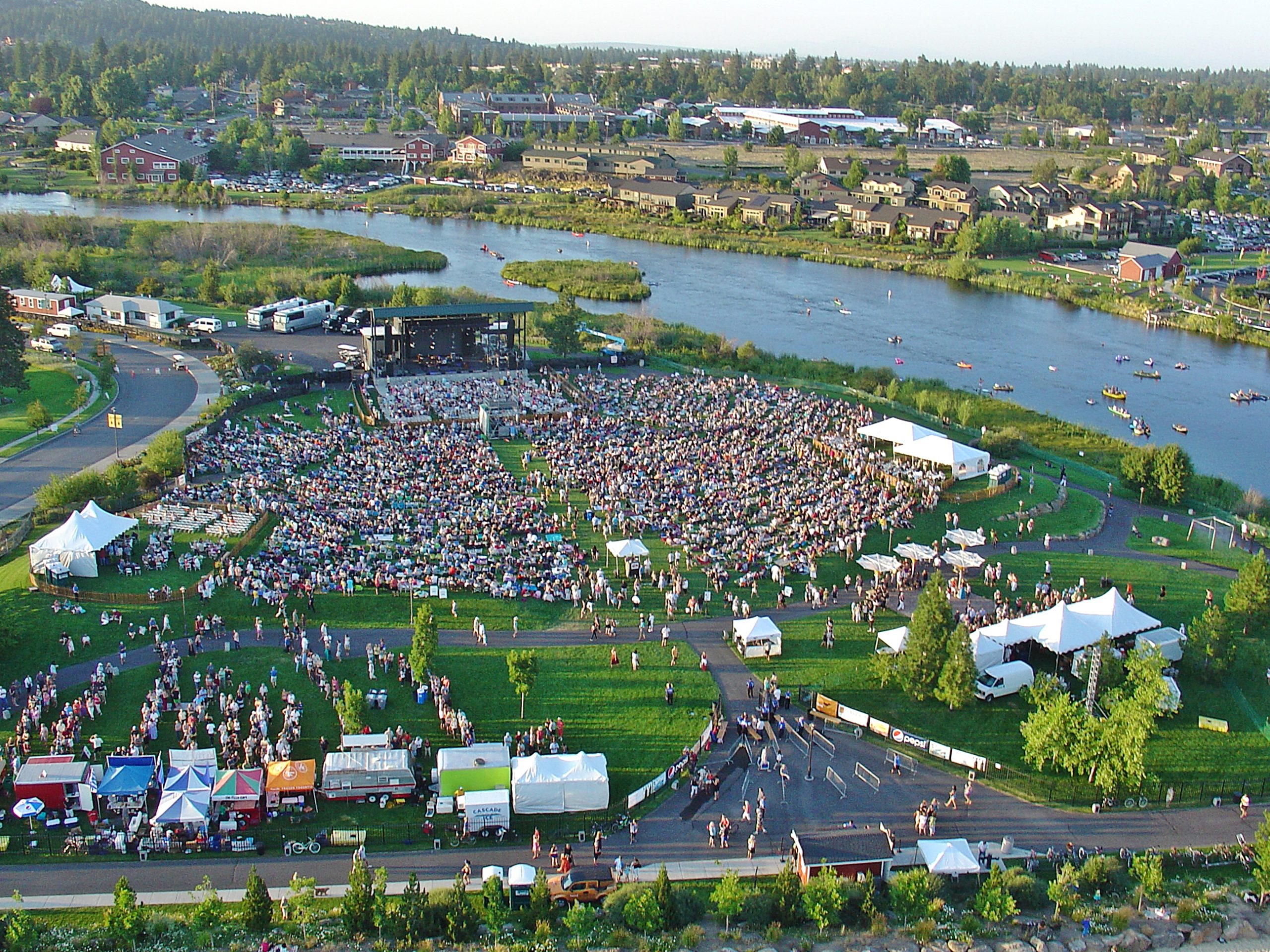 Of the 26 shows on the docket between August 8 (Brantly Gilbert!) and October 16 (Jimmy Eat World!), there are tickets left for 24 of them as of July 22, 2021. Expect that to change in the coming weeks as savvy music fans snap them up. You buy tickets online here or check this link for hours and location info at the Ticket Mill to purchase in person.

You’re wondering which two shows are sold out, right?

First, the good news: While technically, tickets got snapped up instantly for Dave Matthews Band and the second night of Luke Bryan, you can still grab tickets through Ticketmaster’s Verified Resale Program. Yes, you’ll end up paying a little more than if you’d been lucky enough to snag seats when they first went on sale, but you won’t face the risks you’d take buying from a scalper. These are legit tickets that come with a guarantee.

That morning, folks can hit LiveNation.com and score $20 tickets while supplies last. This isn’t for all shows, but it does include Rebelution, Trampled By Turtles, Nathaniel Rateliff & the Night Sweats, Primus, Atmosphere, Old Dominion, Dirty Heads, Modest Mouse, Death Cab for Cutie, NEEDTOBREATHE, Pink Martini, Foreigner, Lord Huron, Dierks Bentley, My Morning Jacket, 311, Flogging Molly, and Jimmy Eat World. The $20 tickets have some limits, and are only available while supplies last. Act early that morning if you can.

Oh, and if you’re a T-Mobile or Sprint customer, you can score exclusive 24-hour early access to the $20 sale through through T-Mobile Tuesdays starting Tuesday, July 27 at 9 a.m.

Some rules have changed

There are some new rules worth noting this season, and most are geared toward keeping us safe. 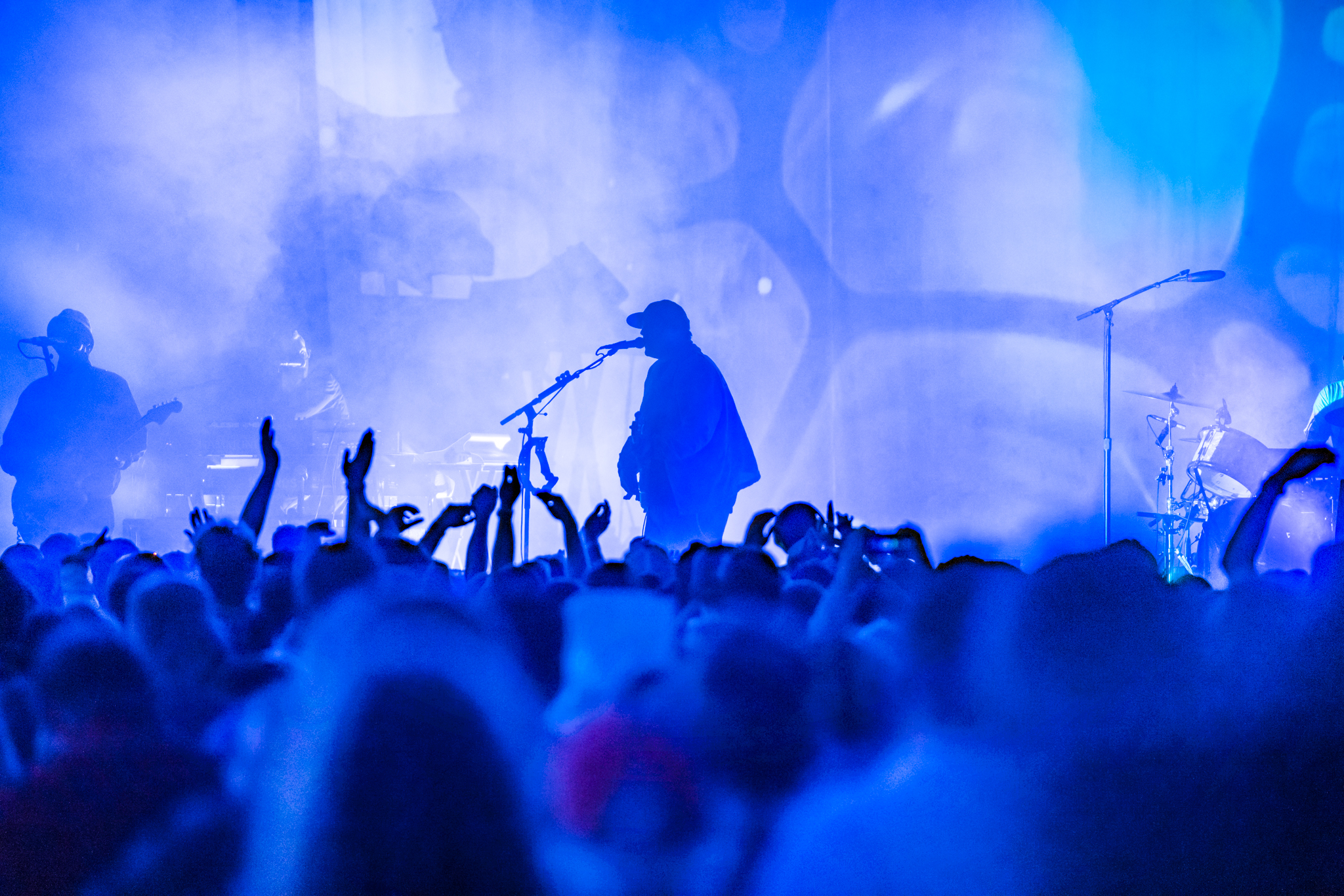 Who else is ready to rock?

The biggest switch is that visitors are no longer allowed to bring backpacks or purses that aren’t see-through. Bags must also meet a size restriction of 12” by 6” by 12”.

Since the official announcement used the words “clear tote bag” alongside lingo about “no backpacks,” a lot of folks (my spouse included) assumed that meant ONLY clear tote bags are allowed, but not clear backpacks. Since I’d already purchased a teeny plastic backpack on Amazon, I confirmed directly with the venue that it’s fine as long as the bag is clear, meets the size restriction, and has a single compartment. You can also have a non-clear clutch bag that’s no bigger than 4.5” by 6.5”.

Why the change? It’s not to make it tougher for you to smuggle that flask of whiskey (okay, that’s part of the reason). But the more time guards spend rifling through your backpack at the security checkpoint, the less bandwidth they have for assessing real risks. Not to get dark, but concert shootings are a thing. Wouldn’t you rather let security guards focus on watching for weapons than letting entry lines back up to Mt. Bachelor as they search a thousand overstuffed purses?

Another switch is a pause of the reusable cup program in light of COVID precautions. You’re still encouraged to bring your own empty, reusable water bottle to fill at water-filtration stations throughout the venue, but reusable cups for concessions are on hold for now.

Speaking of COVID, the venue is following state guidelines which currently state concertgoers will not need to wear masks, prove vaccination status, practice social distancing, or provide a negative COVID test. But to keep us all safe, the venue is offering additional handwashing and sanitation stations and requiring venue employees to be vaccinated. They’re also promoting paperless tickets to eliminate touch-points as much as possible. 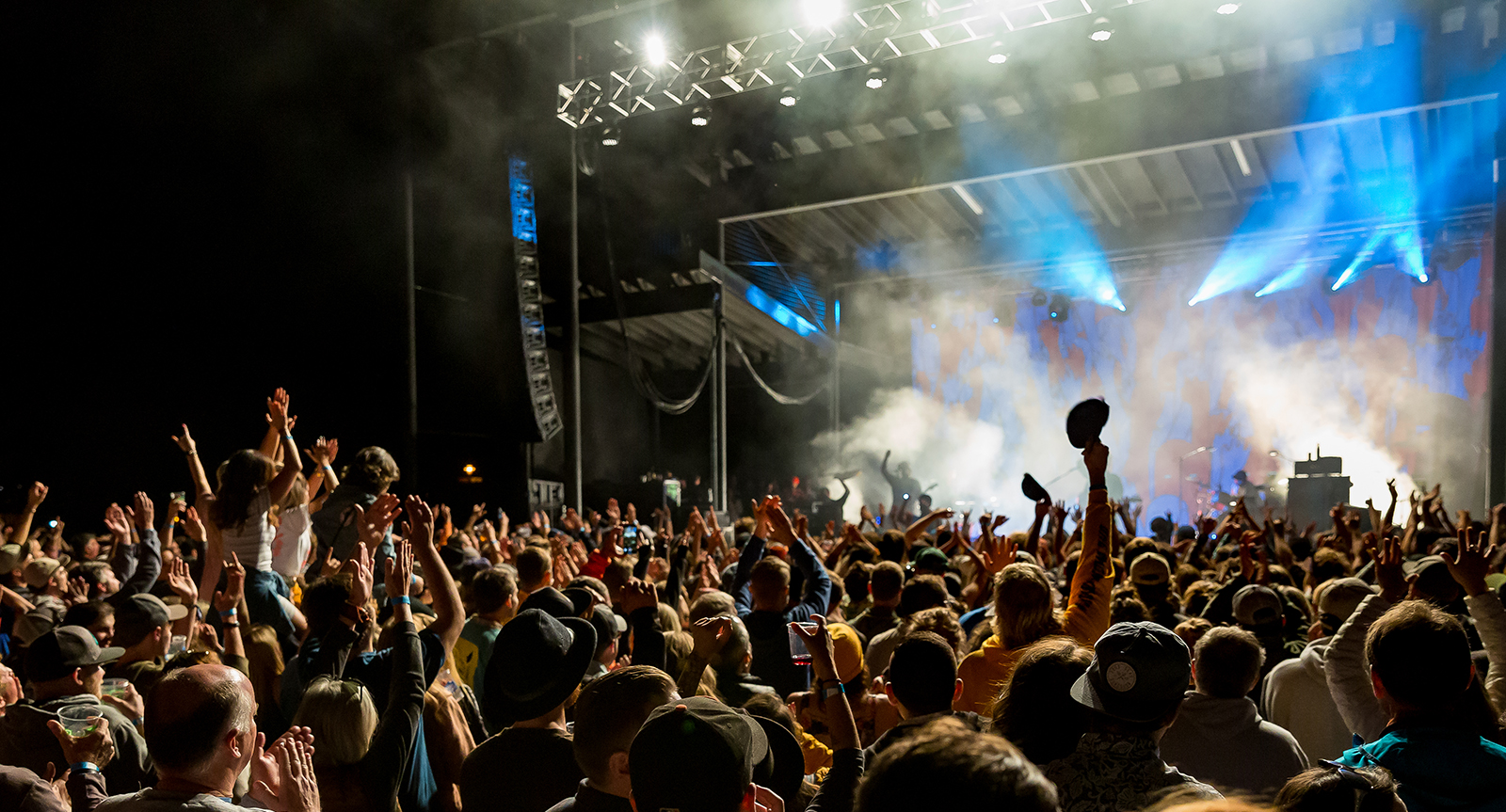 Portugal. The Man captured at Les Schwab Amphitheater in August 2018 by Matthew Lasala

Most of the rules remain the same for the Les Schwab Amphitheater, but since it’s been a while for most of us, how about a recap?