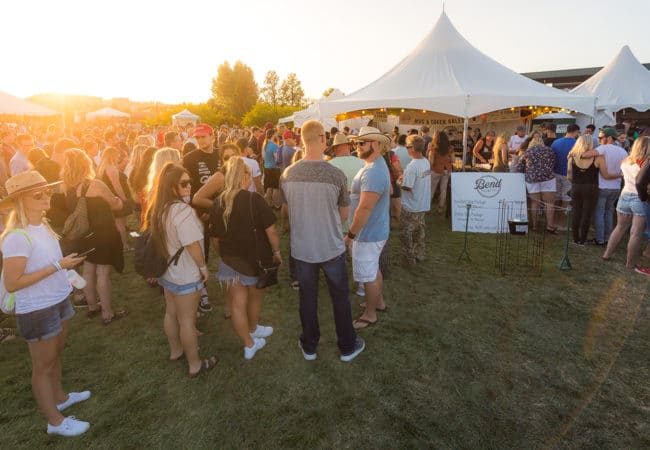 Bend Brewfest is back and better than ever in 2022, so can I confess something? 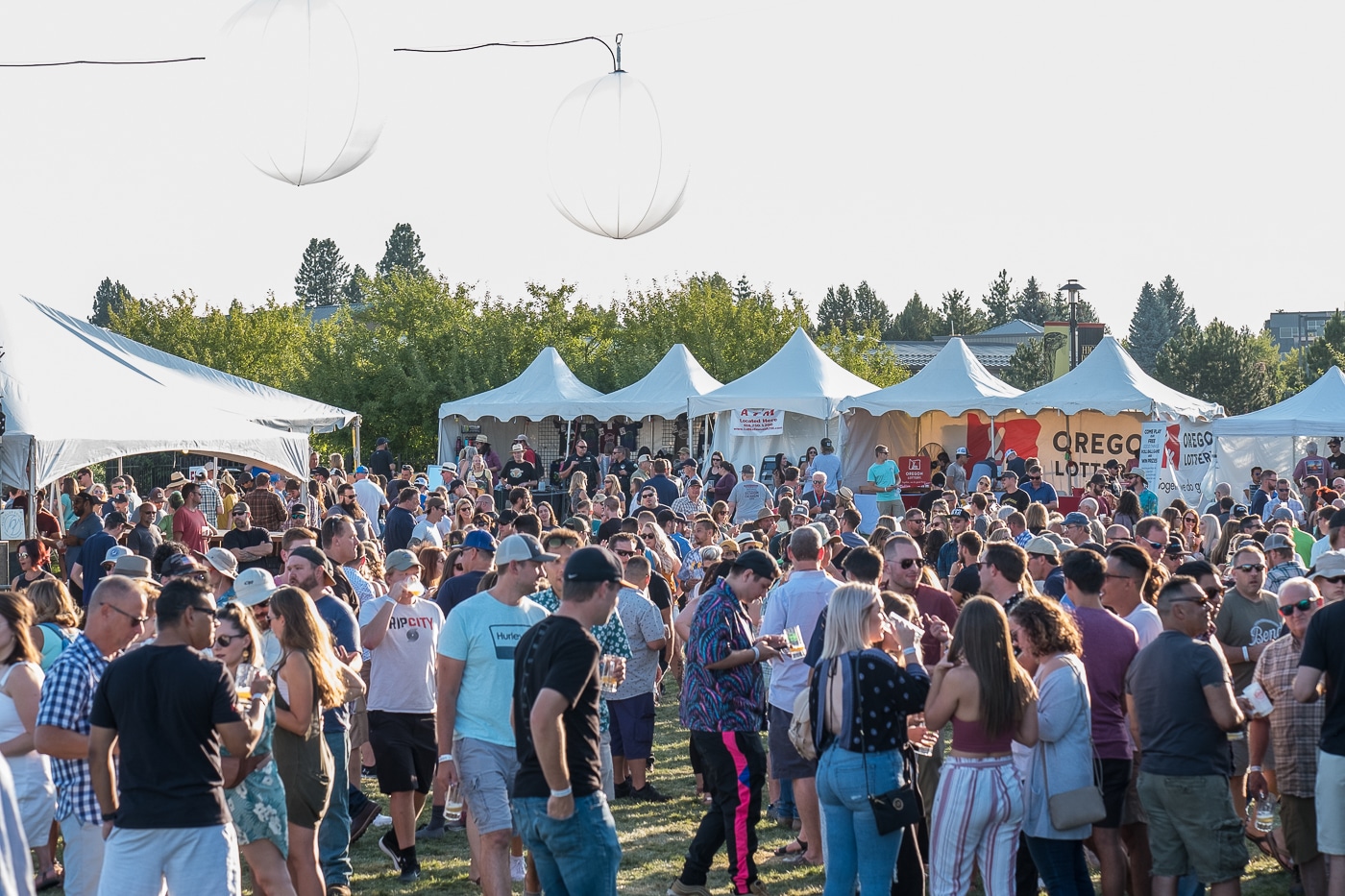 At the end of the last one, I was done attending. This was pre-pandemic 2019, and I felt bummed by big crowds and tipsy twenty-somethings knocking into my beer mug. #GetOffMyLawn

Which is why I’m freakin’ THRILLED that the first post-pandemic Bend Brewfest has two big changes: It’s May 13-14 instead of mid-August, and it’s spread along the other side of the river. Why is this so awesome? Read on for what’s amazing about Bend Brewfest 2022.

Why the new date (and why is it great?!)

As my curmudgeonly commentary might indicate, I’m a middle-aged beer snob who’d rather swill suds in smaller crowds. When I first heard rumors Bend Brewfest would switch from a midsummer event to a spring one, I perked up at the possibility of a more low-key event. One where beer itself takes center stage.

That’s precisely what Bend Brewfest aims for with the move to May 13-14. Setting it before Memorial Day Weekend (the point at which Bend gets nutso for the next four months) ensures a slightly smaller crowd, but get this––the number of breweries is about the same.

Not only that, but with more than 65 breweries bringing 100+ beers, ciders, seltzers, and wines, the event will boast the most brews of any festival in Oregon if not the entire Pacific NW. Talk about “kid in a candy shop” (except instead of kids, we’re responsibly-drinking adults, and instead of candy…well, you get the idea). 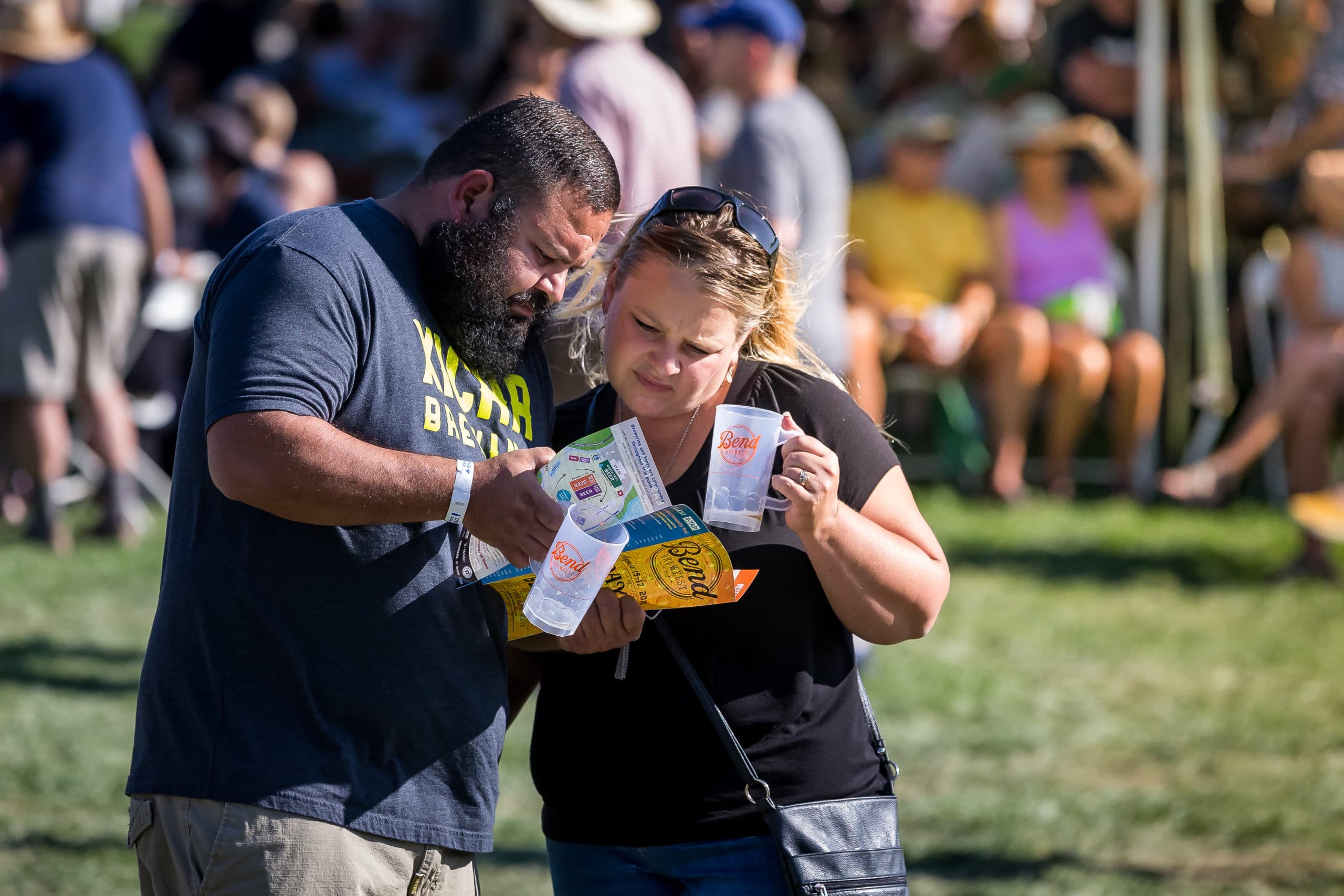 While the end-time happens a wee bit earlier than in past years, the upside is a little less of the “let’s get super-wasted” vibe and a bit more “let’s prioritize tasting exciting new beers.” That’s the hope, anyway.

A new location, too?

This one’s a happy accident, thanks to construction projects at the normal venue. With the Hayden Homes Amphitheater neck-deep in prepping for concert season, Bend Brewfest will be spread out through the Old Mill District on the opposite side of the river.

Picture the grass near the river beside the Hot Pond and restaurants like Flatbread Neapolitan Pizza and Cafe Yumm. Got it? That’s where you’ll arrive for mugs, tokens, and a limited-edition Beer Notes notebook. It’s also where you’ll find the first batch of beer pouring stations.

But the event spans upstream from there, through Center Plaza and past the bridge, and all the way along the river to the spot between lululemon and Vanilla. That’s a huge space to spread out sipping suds, with the benefit of being right along the river. We get a view with every brew!

Another upside of the new location? The ease of pausing between drinks for shopping and dining around the Old Mill District. No more feeling trapped in tight crowds, since it’ll be simpler to spread out and explore. 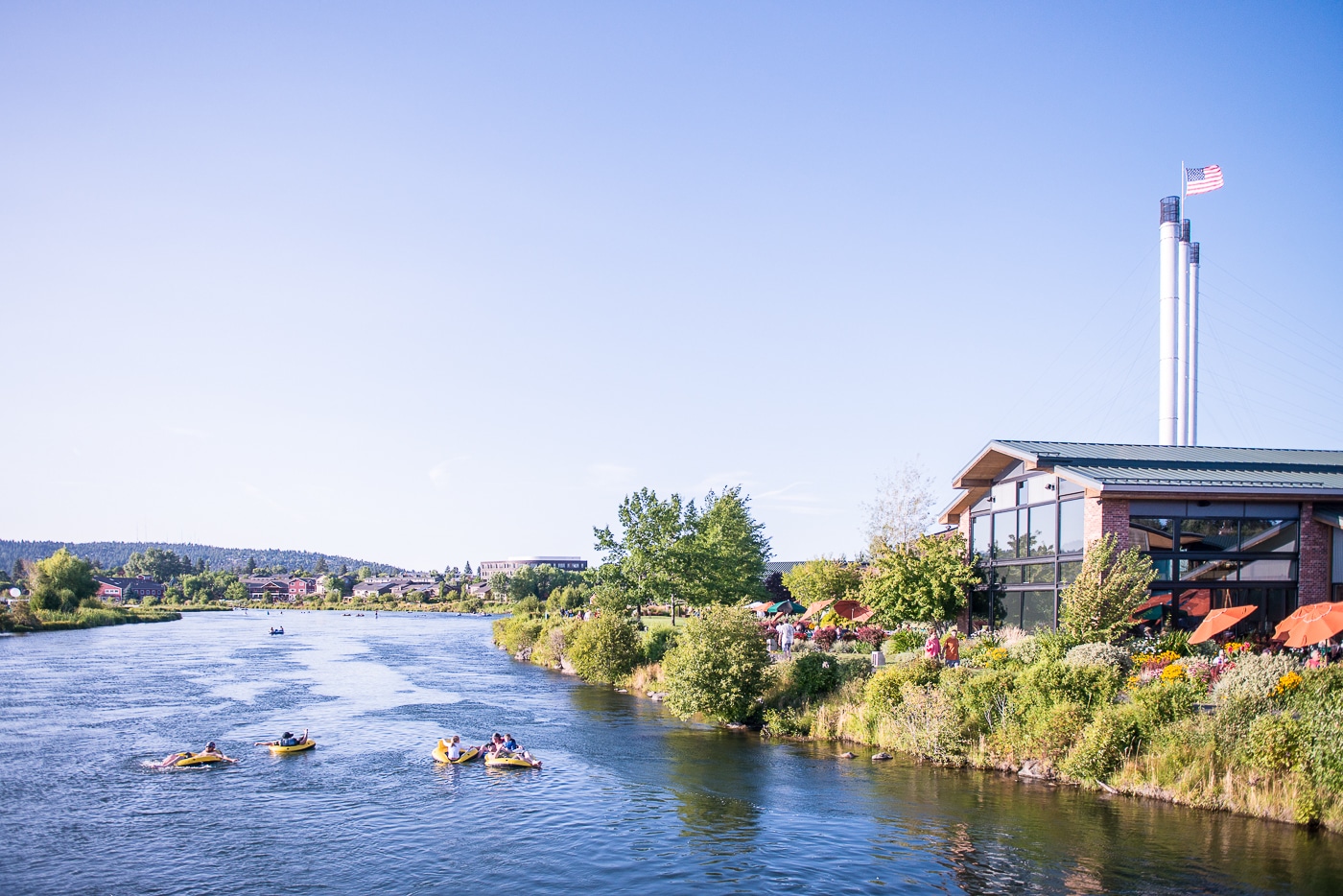 We’re on the opposite side of the river this year and it’s going to be EPIC!

We’ll see how it goes, but can I confess something else? I kinda hope Bend Brewfest stays on this side of the river for future events.

What’s new with the beer?

Other new faces include Bend-based Van Henion Brewing, which was founded in 2021 by former Boneyard brewers, and Funky Fauna Artisan Ales, which opened its cozy Sisters taproom in late 2021.

Other breweries from elsewhere include Yakima’s Bale Breaker Brewing Company, which is pouring its Homegrown IPA made entirely of hops and malts grown on the Bale Breaker estate. Fort George of Astoria is also back and showcasing its Fanzine IPA and a beta version of its annual 3-Way IPA (created in partnership with Seattle’s Ravenna Brewing and Alvarado Street Brewery out  Monterey) which won’t release until the week after Brewfest.

Another cool perk? The X-tap is INSANE this year, with nearly two-thirds of participating breweries bringing an X-tap beer to the table. What’s an X-tap beer? These are small batch and experimental beers offered in limited quantities for short windows of time. Do yourself a favor and scan the X-tap list before you go. If there’s something you’ve got your heart set on, get in line early because these brews go fast. 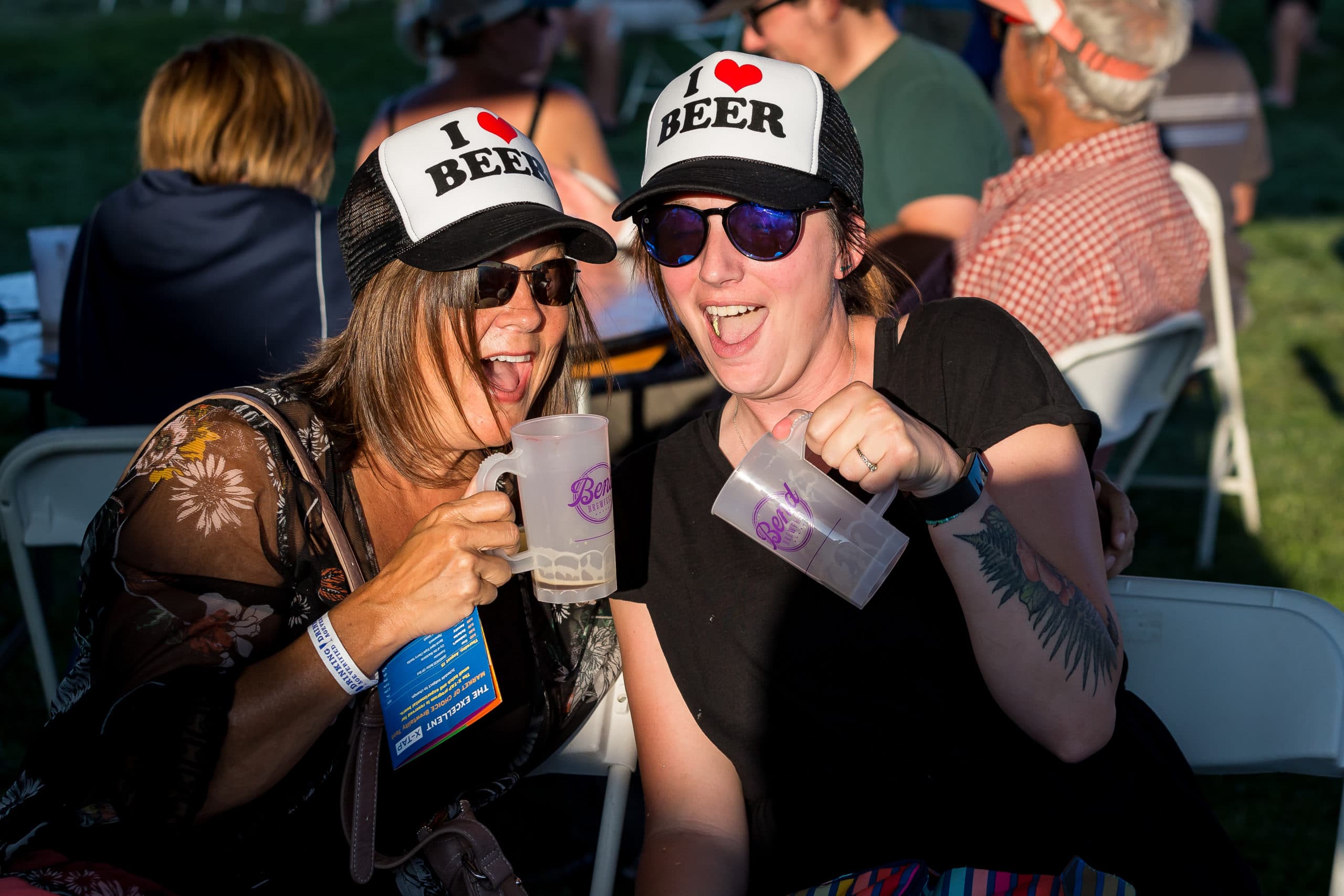 Even if you’re not a beer fan, there’s plenty of cider, seltzer, and wine for you to enjoy.

What if I don’t dig beer?

Enjoy tastes from Bauman’s Cider, which is serving up a refreshingly tart boysenberry lemonade concoction. There’s also a mango cider from Eugene-based Cyderish and a tropical guava lemonade cider from Schilling Cider, plus plenty more on tap from locals like Bend Cider Co. and Tumalo Cider Co.

In other words, you won’t go thirsty, even if beer’s not your jam.

What should I know about entry and parking?

It pays to plan ahead this year, with a savings of ten bucks for tasting packages purchased in advance. Go here to pre-purchase your Bend Brewfest entry package for $40. It includes admission for both days of the festival, 10 tasting tokens, and a Bend Brewfest tasting mug that’s a slight upgrade from the hard plastic ones you’re used to (think Silipint this year). While supplies last, you’ll also get a special beer notebook and a Bend Ale Trail branded pencil for tracking your favorite brews.

Only a limited number of pre-sale tickets are available at that $40 price point, by the way. If you wait ‘til you get to the gate, you’ll pay $50 for the same thing. You can even pre-purchase extra tasting tokens for $10 to get five additional 4-ounce pours.

As for parking, it’s a good guess the main lot behind REI will fill fastest. Instead of circling like a tail-chasing golden retriever, try the area behind Athleta or the upper lots. Better yet, make an eco-friendly choice by biking, walking, or carpooling with a sober driver. 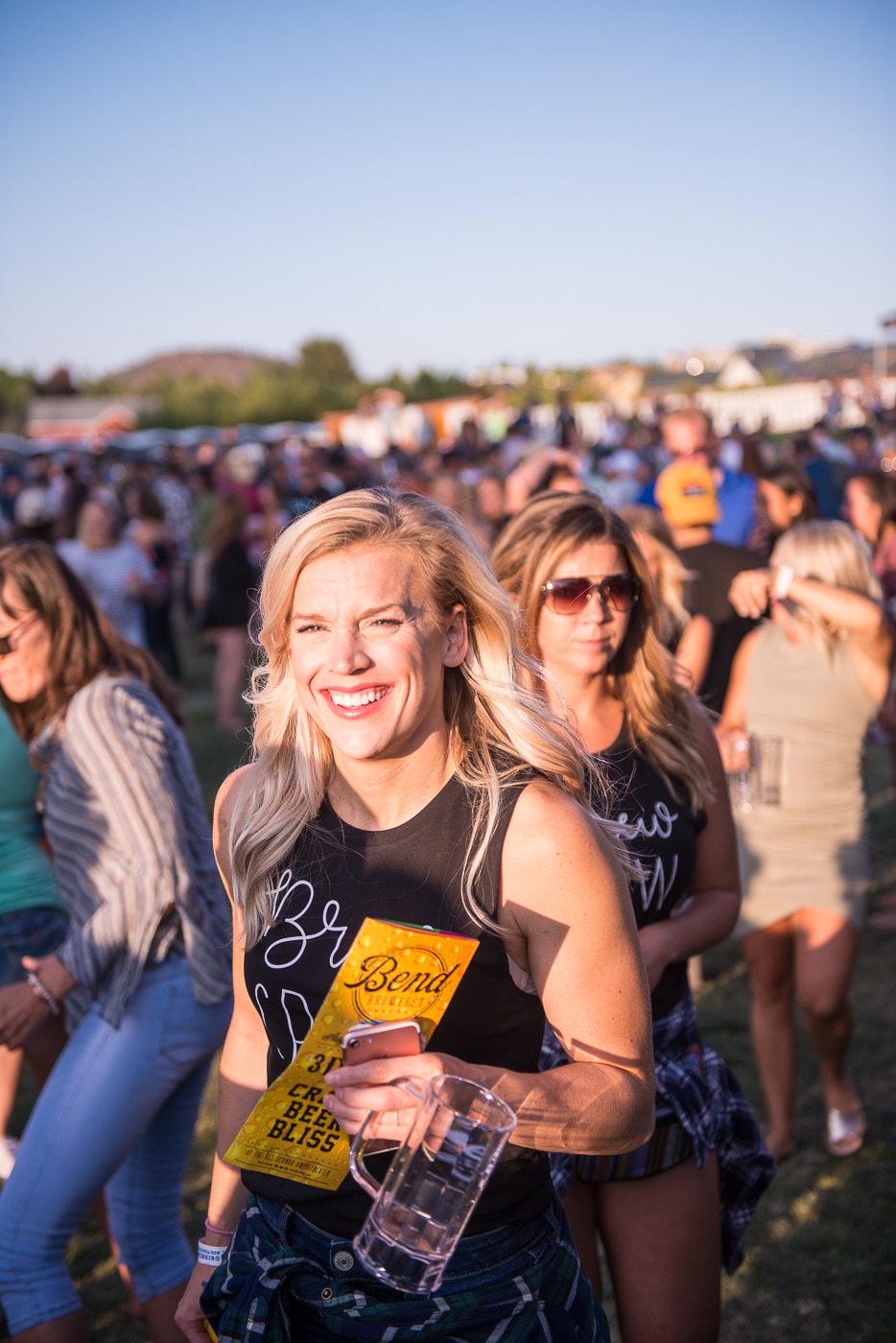 Beer brings a smile to your face.

Uber, Lyft, and local cabs are also available, so there’s no need to stress about driving, parking, or getting behind the wheel after a long day of sipping suds.

Anything else happening that weekend?

I’m so glad you asked! If you’re worried mid-May won’t have the festive flair of a summer month, you might’ve forgotten Pole Pedal Paddle. That’s Bend’s quintessential multi-sport event for nearly half a century. It paused for two years during COVID, but it’s back in 2022 and happening on the second day of Bend Brewfest. Get your giddy vibe going when you cheer on PPP competitors, then head to Brewfest with your stoke on.

If you’d rather keep your focus on beer, you’ll find several other special events tied to Brewfest. There’s a Thursday evening pre-funk event at Silver Moon Brewing, and a Friday night five-course beer tasting menu at Boxwood Kitchen. The Silver Moon event is free for anyone with proof of Brewfest package purchase. As of this writing (the afternoon of April 21) there were still a few seats left for the Boxwood dinner, so call quickly to nab a spot.

Got any insider tips?

I’ve attended Bend Brewfest every year it’s existed, so let’s not dwell on how old that makes me. The upside is a bunch of hard-earned tips I can pass along to you:

6 things to look forward to as we fall back

Does anyone else keep muttering curses since Daylight...
Read Post

The best things to do in Bend for November

There’s frost on the grass, some newly-naked trees, and fresh, frosty caps on our mountains. Must be November in Bend! More than any other month,...
Read Post
‌