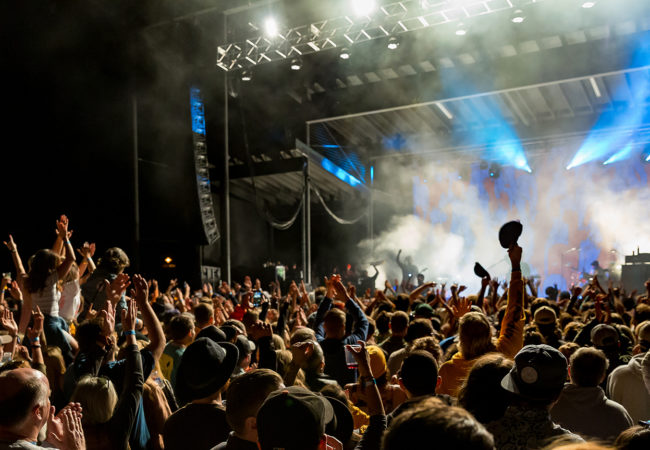 Maybe it’s sunset’s glow glinting off the river. It could be the caress of a cool breeze. Or maybe it’s how grass tickles your toes as a melody skims your ears and shimmies straight to your soul.

It’s all those things that make Bend’s outdoor concert season a thing of magic. But what makes 2022 more special than ever? Here’s the answer, along with key things to know about the upcoming concert season at Hayden Homes Amphitheater. 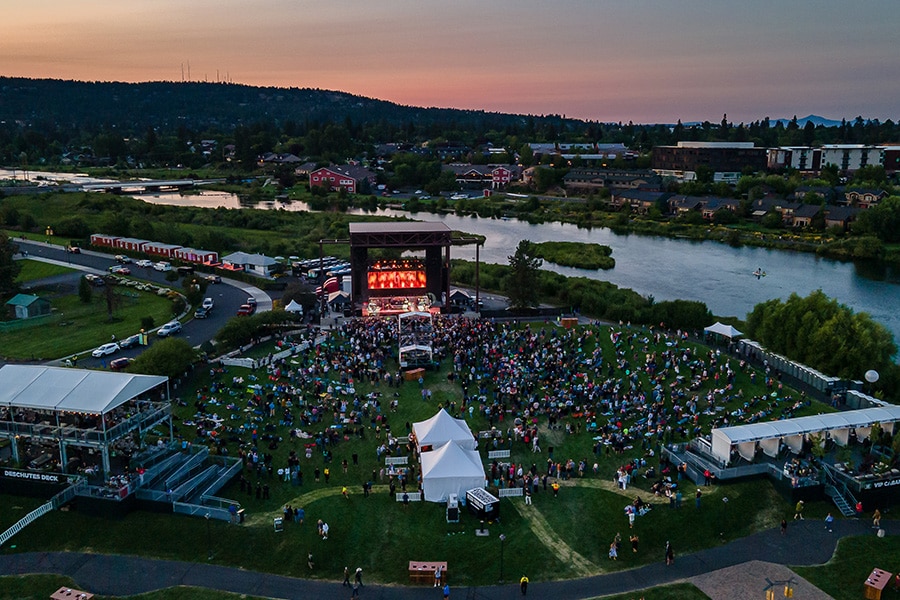 A magical setting for getting your groove on.

Much more has changed for the better. Remember when they announced a record-breaking 26 shows for the 2021 season? In 2022, we’ll have 51 shows. You read that right. FIFTY-ONE. Nearly twice as many as the previous record.

And what variety! From country to standup comedy to ‘90s grunge to gods of rock, there’s a little of everything in the 2022 lineup.

Also new: A little more space for everyone to spread out. There’s a new entrance that’s closer to the river and back toward the treeline. More space means more ADA pathways for folks in wheelchairs. There’s also space for special VIP performances (and anyone who caught one last year from Brandi Carlile or Luke Bryan knows how cool this is!)

While the space got bigger, the venue capacity stayed the same (capped at 8,000) so you’ll have plenty of room to swing your groove thing.

All right, let me rip the Band-Aid off fast with news that’s a tiny bit of a bummer: You can’t bring your own chairs. The process of measuring and searching them proves too time-consuming for security staff already dedicated to slightly more pressing concerns like…yanno…security. While I’m disappointed I can’t drag my Costco chair through the gates, I’ll deal if it means no one’s dragging in a weapon.

The good news is you can bring in those legless, flat-bottomed stadium cushions lots of us have for football games. Crazy Creek makes some excellent ones that are pretty darn comfortable. For most shows except the ones that are sold out, there’s also the option to bring towels or yoga mats. Another safe bet is renting chairs inside for $10, so there are plenty of ways to keep your butt off the grass. Good? Okay, let’s get to more happy news.

You’ll find a complete list on the Bend Concerts website, and I offer the following knowing it’ll be outdated if another announcement slips through or something else sells out. But here’s the lineup as of June 1, 2022: 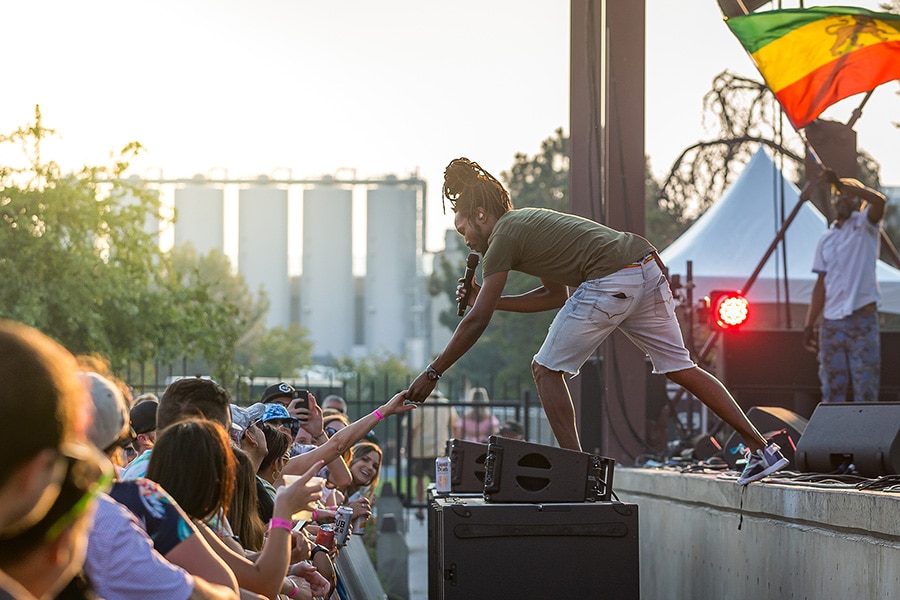 Rebelution will return to Bend this summer.

I just got carpal tunnel typing that!

With the caveat that this could change the instant I hit “post,” here’s what’s already sold out: Jack Johnson, Odesza, Tenacious D, Nine Inch Nails, and the first night of The Chicks.

Almost sold out (and might be soon if you don’t buy tickets quickly): the second night of The Chicks, Alanis Morisette, and both Kenny Chesney shows.

While you can buy tickets online, here’s a tip: Hayden Homes Amphitheater remains one of the few Live Nation venues with a local box office. That’s something folks in the Old Mill District made sure of when partnering with Live Nation. They wanted to be sure there’s an on-site box office where folks can not only buy tickets in person, but save a few bucks on service charges. You can also skip the service charge by buying tickets in person at the Old Mill’s Ticket Mill office way in advance of your show.

Oh, and here’s my other favorite thing about this season: Comedy! Both Jim Gaffigan and Nate Bargatze are known for clean, family-friendly humor in their standup comedy shows. And Weird Al Yankovic is bringing it back for the second time with his kooky brand of musical humor. If you like to laugh, save space in your summer calendar for those shows. 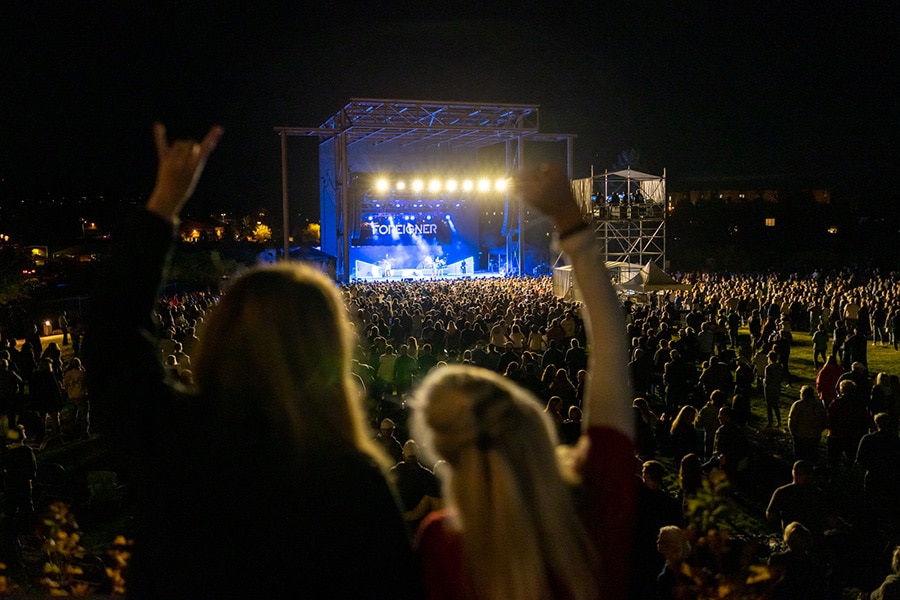 Have you seen the new stage?

With COVID raging the summer of 2021, some folks sat out the last concert season. If you’re among them, you might’ve missed seeing the venue’s biggest change.

The new stage is 62 feet high and added an additional 1,840 feet in total stage footprint. Why does it matter? In past years, bigger acts would pass on performing at Les Schwab when they learned the venue couldn’t accommodate their rigging (think lights and speakers). But the new stage brought us up to snuff with larger venues, launching Bend from the minors to the big leagues.

The new stage has a minimalist design that pays homage to Bend’s sawmill history. There’s also a new fully ADA-compliant (Americans with Disabilities Act) pathway from the ADA gate that spans the entire venue.

You’ll also see new seating areas that weren’t there before 2021, including cabanas and a raised deck near the river. Check their website for pricing and details, including how to score mini-season passes for special seating areas. 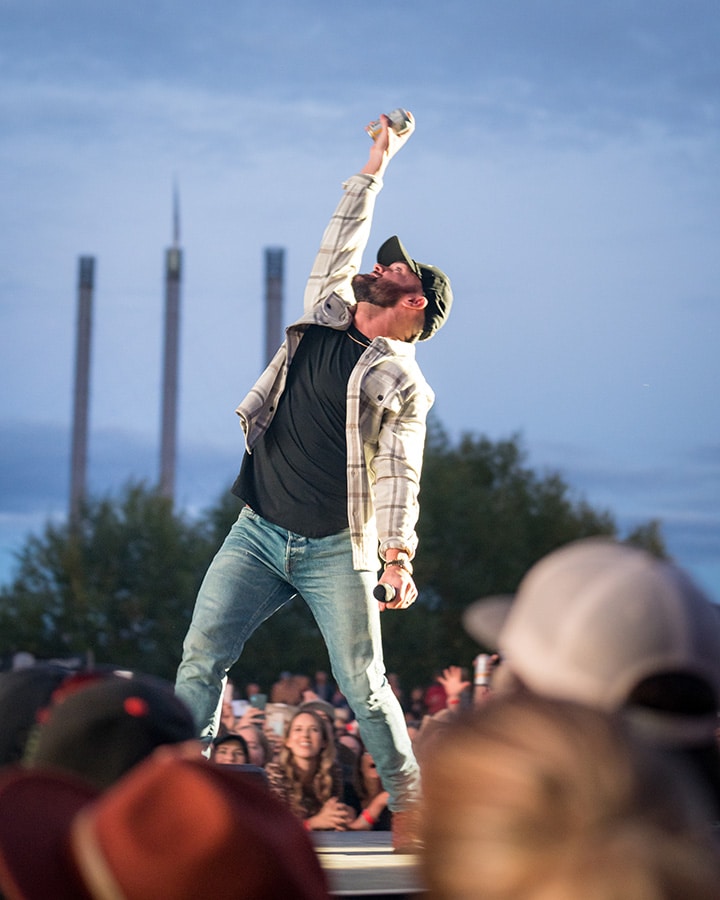 But for everything else, you’ll still find tickets as of June 1, 2022. That means there’s still time to snag seats for Norah Jones, HAIM, The Black Crowes, Darius Rucker, and many more acts journeying to Bend this summer.

And here’s another bit of good news for those sold out shows: If you’re patient and you watch the site closely, you can still grab tickets through Ticketmaster’s Verified Resale Program. Yes, you’ll end up paying a little more than if you’d been lucky enough to snag seats when they first went on sale, but you won’t face the risks you’d take buying from a scalper. These are legit tickets that come with a guarantee.

Top tips for having the best Bend concert experience

In case you hadn’t guessed by now, I go to a lot of Bend concerts. I start stalking concert announcements on January 1, and I set my family’s vacation plans around the Hayden Homes Amphitheater schedule. Below are some of the best tips I can offer for maximizing your Bend concert experience:

See you at the shows!