Primus and Mastodon in Concert

View All Events
Primus + Mastodon
with special guests JjuuJjuu
Saturday, June 23
Doors open at 5 p.m., show starts at 6 p.m.
General Admission $49.50. Service fees not included.
Taking inspiration from a wide range of sources has always been what makes Primus one of the most distinctive, innovative bands of the past 30 years.
The trio’s alt/punk/avant-garde/psychedelic/country attack, along with singer/bassist Les Claypool’s surreal, fever-dream lyrics, resulted in some of rock’s unlikeliest hits, including “Tommy the Cat,” “Jerry Was A Race Car Driver,” and “Wynona’s Big Brown Beaver.” Primus also took a chance on a couple of outlandish animators in 1997 and created the theme song for “South Park.”
The band’s latest album, The Desaturating Seven, marks the return of the definitive Primus lineup: Claypool, guitarist Larry “Ler” LaLonde, and drummer Tim “Herb” Alexander. It’ll be the trio’s first album of original music together since 1995.
Joining Primus at the Les Schwab Amphitheater is progressive metal maestros Mastodon. The band won the 2018 Grammy for Best Metal Performance for the song “Sultan’s Curse” and was nominated for Best Hard Rock/Metal Performance Grammys in 2007, 2014 and 2015.
Psychedelic rock up-and-comers JjuuJuu will open for Primus and Mastodon. Founed by Phil Pirrone, a longtime Los Angeles-based musician and festival organizer, JjuuJuu released its debut album, Zionic Mud, this past April. 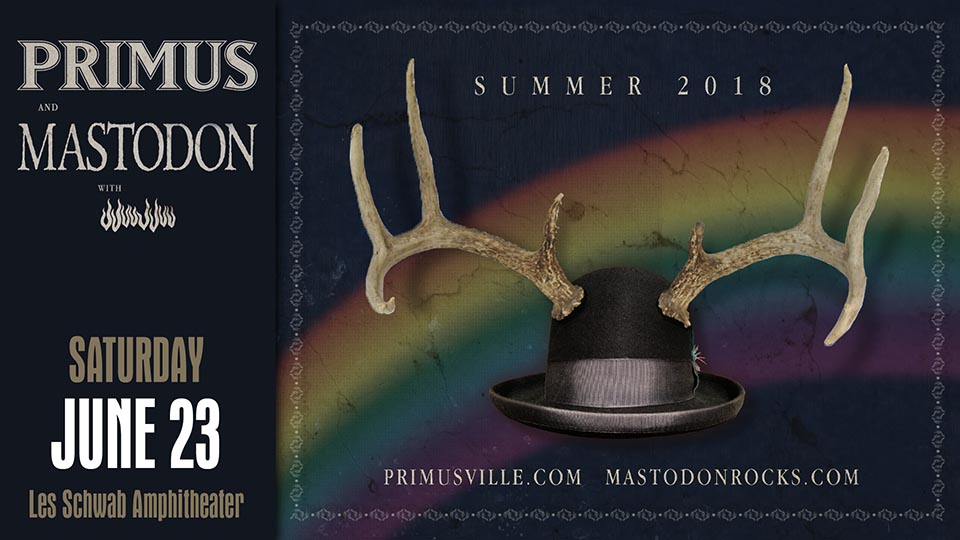