The Decemberists in Concert

View All Events
The Decemberists
with special guests Whitney
Thursday, July 26
Doors open at 5 p.m., show starts at 6:30 p.m.
General Admission $40.50. Service fees not included.
The Decemberists explore a new sound with a new producer on their inspired eighth studio album I’ll Be Your Girl, which was released March 16. The acclaimed Portland-based band worked with producer John Congleton (St. Vincent, Lana del Rey) and embraced influences such as Roxy Music and New Order to spark a new creative path, as can be heard on the synth-driven lead single “Severed.”
“When you’ve been a band for 17 years, inevitably there are habits you fall into,” says frontman Colin Meloy. “So our ambition this time was really just to get out of our comfort zone. That’s what prompted working with a different producer and using a different studio. We wanted to free ourselves from old patterns and give ourselves permission to try something different.”
With I’ll Be Your Girl, the Decemberists — lead vocalist and guitarist Meloy, guitarist Chris Funk, keyboardist Jenny Conlee, bassist Nate Query, and drummer John Moen — explore new approaches to making music and broaden their sonic range. It’s the group’s follow-up to 2015’s What a Terrible World, What a Beautiful World.
“On the last record,” Meloy says, “there were moments when I thought I was making familiar choices. I tried to be mindful in the songwriting process of challenging myself and being a little more critical. The idea was, how can we make unfamiliar choices, turn off the light a little and grope around in the dark a bit?” 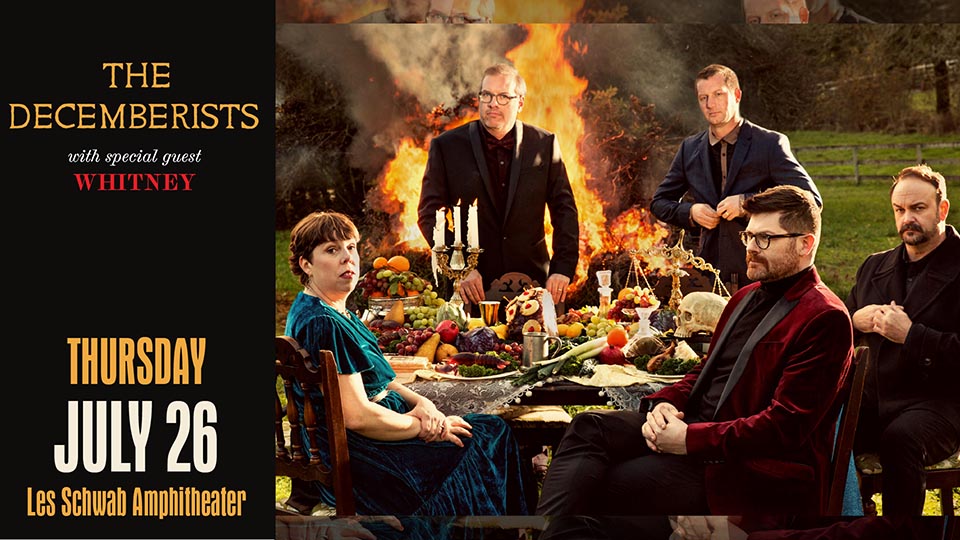