Big O Bagel opened its first store on Bend’s Westside in 1994 and has always maintained a focus on serving real food that is simple and delicious. That’s why their bagels only have six ingredients, and preservatives are not on the list. Big O Bagel believes that whether you ski, … read more

Big O Bagel opened its first store on Bend’s Westside in 1994 and has always maintained a focus on serving real food that is simple and delicious. That’s why their bagels only have six ingredients, and preservatives are not on the list. Big O Bagel believes that whether you ski, snowboard, run, bike, hike, climb, kayak, or anything else, there is nothing better to fuel your adventure than a bagel. Fuel up in the morning with a rotating selection of bagel flavors and cream cheese spreads. Heading out for a big excursion? Fuel up right with one of the hearty bagel egg sandwiches. If you think bagels are just for breakfast, think again. Big O Bagel lunch sandwiches come topped with everything from hummus to turkey and bacon to pepperoni. They even wrap their bagel dough around a hot dog, roll it in cheese or sesame seeds (or not) and bake it up; a crowd-pleasing kid winner. And gluten-free friends, Big O Bagel has you covered with Udi bagels. Want to score a Big O Bagel for half price? Order one up, take a picture of you and your bagel on your adventure, post it on Facebook and/or Instagram with #bringabagel and your next bagel is 50% off when you order it within a week. Win!

Bites off the Beaten Path

Bend can be a little overwhelming if you try to dive in deeper to the restaurant scene. There are just too many options. These are some of the favorites local spots that Jason thinks you should check out. There are just enough options that you will find various tastes to fit any craving. Dandy’s could become your next quick meat as you head out for Smith Rock in Terrebonne. Perhaps you’ll want to order the largest pizza you’ll ever see from Cibelli’s or drive through Thai on the Fly for free samples and delicious quick Thai food. The perk to looking at these different restaurants is it gets you around to even more of Bend so have fun exploring! 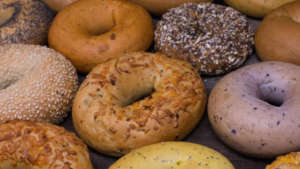