An institution in Bend since 1994, Cascade Lakes Brewing Company has expanded from its small brewing facility to a state-of-the-art, 25-barrel brewhouse system brewing 775 gallons per batch, three times daily. They brew six beers year-round and many seasonals throughout the year, distributed and sold and Washington, Oregon, Idaho, Alaska, … read more

An institution in Bend since 1994, Cascade Lakes Brewing Company has expanded from its small brewing facility to a state-of-the-art, 25-barrel brewhouse system brewing 775 gallons per batch, three times daily. They brew six beers year-round and many seasonals throughout the year, distributed and sold and Washington, Oregon, Idaho, Alaska, and California.

They expanded from just the brewery to four local pubs: 7th Street Brew House, Tumalo Tavern, Cascade West Grub and Alehouse, and their flagship restaurant in Bend, Cascade Lakes Lodge, a 6000 square foot restaurant featuring a full bar, pool table, three bristle-board steel-tip dart boards, daily lunch and dinner specials, fireside dining, and an outside heated dog-friendly patio in the summer. In Redmond? Join in a game of horseshoes at the 7th Street Brew House, where the indoors and outdoors join when the garage door walls open to patio seating and a fire pit for cooler nights. 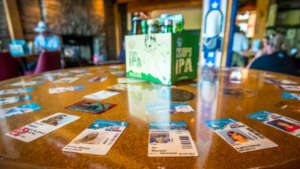