Cibelli’s Pizza was the project of Frank Cibelli, who was born and raised in New York City. Growing up in New York there was nothing Frank enjoyed more than a fresh, hot slice of pizza, but after moving to Oregon, he realized that his options for acquiring a fine slice … read more

Cibelli’s Pizza was the project of Frank Cibelli, who was born and raised in New York City. Growing up in New York there was nothing Frank enjoyed more than a fresh, hot slice of pizza, but after moving to Oregon, he realized that his options for acquiring a fine slice of pizza pie were quite limited. He decided to open his own pizza restaurant at the original Tumalo location and serve the best pizza possible, a restaurant where the art of tossing and spinning pizza dough would be celebrated. After being open less than a year, the demand was enough to allow him to open a second location. Today, you can find Cibelli’s Pizza on Bend’s west side, east side and south end, one more in Redmond and even a couple over the mountain in Corvallis, OR. Frank has always said, “Take care of the people, and the people will take care of you.” It’s still a family owned restaurant and their 24″ GIANT pizza may not fit in your car (for reals, plan accordingly). They’ve got a good ‘slice, salad and soda’ special, they’ll do custom slices and their salads are better than most pizza joints serve. 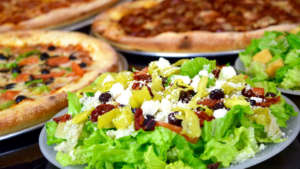