Kombucha is a lightly-effervescent fermented tea made by combining sweet tea with something called a SCOBY (Symbiotic colony of bacteria and yeast). The result is a yummy, sometimes sweet, sometimes tangy drink known for its health benefits. It’s a natural source of energy and is full of probiotics, B vitamins, … read more

Kombucha is a lightly-effervescent fermented tea made by combining sweet tea with something called a SCOBY (Symbiotic colony of bacteria and yeast). The result is a yummy, sometimes sweet, sometimes tangy drink known for its health benefits. It’s a natural source of energy and is full of probiotics, B vitamins, vitamin C, antioxidants and helpful enzymes and amino acids. Humm Kombucha was originally called Kombucha Mama and began with home-brewed kombucha delivered in gallon glass jars and a stand at the Bend Farmers Market. As much kombucha as they produced, the founders discovered that people wanted more, so they moved into a tiny brewing facility and hired a small and dedicated staff, which eventually turned into a 5,000 square foot facility (then a 40,000 sq ft space!) and a new name. Humm is now available in 50 states as well as Sweden and Guam, with further expansion ahead, but their production, headquarters are hearts are still in Bend, where you can find their products bottled and on top in multiple locations. 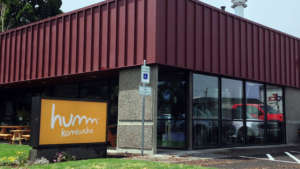