White Water Taphouse is a craft beer bar located in the heart of downtown Bend, offering hard cider, wine, and nitro cold brew coffee in addition to their extensive tap list. With a goal to have both specialty and limited release beers on tap that can’t be found around town, … read more

White Water Taphouse is a craft beer bar located in the heart of downtown Bend, offering hard cider, wine, and nitro cold brew coffee in addition to their extensive tap list. With a goal to have both specialty and limited release beers on tap that can’t be found around town, their tap list is constantly rotating with beers from breweries across the northwest and beyond. They do growler fills on almost all beers (not nitro or some very small batch beers). While they have a small snack menu of popcorn, chips and salsa, and mixed nuts, on most weekends they have a guest chef providing fresh poke bowls and sushi. On Tuesdays, they sell $3 pulled pork tacos and also allow any outside food to be brought in. Minors, including newborn babies, and pets are not allowed at any time. They have three flat screen TVs usually playing sports, and take reservations for large groups, except on Brewery Bingo nights.

As the longest standing community college in all of Oregon,...

Our new Bend hotel is located in the heart of...

Riverhouse on the Deschutes features the largest convention center in...

Waypoint Hotel is a newly renovated, boutique hotel in Bend's...

Whether you’re planning a wedding, corporate event or a special... 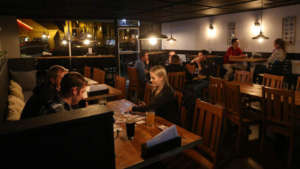