See You, See Me by Megan Phallon

About the Piece: “See You, See Me,” was inspired by the idea that a simple reflection in nature can have a profound emotional effect on people. Even without interaction, it speaks volumes about our own passions and insecurities. If we could only ask just that of each other. About the … read more

About the Piece: “See You, See Me,” was inspired by the idea that a simple reflection in nature can have a profound emotional effect on people. Even without interaction, it speaks volumes about our own passions and insecurities. If we could only ask just that of each other.

About the Artist: Megan Phallon was raised in a small coastal town in Northern California. Art has always been a constant in her life from an early age. She’s traveled extensively in Central America and the Caribbean, which has a huge influence on her color choices. Megan is a self-taught painter. She has been influenced by artists like Edward Hopper, Ronald Penrose, and Kyle P. Stewart. The scenery most featured in her paintings is a combination of places she has lived, including Northern California, Southern Utah, the Black Hills of South Dakota, and now Central Oregon.

See You, See Me by Megan Phallon

Back of Deschutes Brewery & Public House, Tin Pan Alley, Bend, OR 97703 Get Directions

Mockingbird Gallery is more than an art gallery; it is...

Gilded River was made by Ken McCall, Mark Baltes, and...

Might of the Work Force was made by Devin Field...

About the piece: While sea creatures aren’t a common sighting...

About the piece: This metal relief sculpture was inspired by...

About the Piece: The inspiration for “Love Lost, Love Found” came...

About the Piece: “The Millworker” depicts Dan MacLennan, who moved...

The Millworker by Sheila Dunn 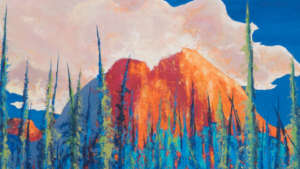