Walking around much of Central Oregon, it’s easy to forget that the region was formed long ago by volcanic activity. But take a short trip under the surface of the earth and you can experience the area’s geology in a whole new way. Lava River Caves is on Highway 97 … read more

Walking around much of Central Oregon, it’s easy to forget that the region was formed long ago by volcanic activity. But take a short trip under the surface of the earth and you can experience the area’s geology in a whole new way. Lava River Caves is on Highway 97 approximately 15 miles south of Bend, and gives visitors the opportunity to explore a mile-long lava tube. Descend 55 stairs and then you are off on a self-guided tour of the tube, which takes around 90 minutes and is 2.2 miles roundtrip. Lava River Caves was one of the first lava tubes to be discovered in Oregon and is the longest one in the state. While the walk is not technical, the mix of flat boardwalks, uneven surfaces, and stairways is for the surefooted. In the interest of preventing the spread of White-Nose Syndrome to bats that reside in the cave, you are asked not to wear or bring into the cave any clothing or gear you have used in any other cave or mine. The average temperature in the cave is 42 degrees, even on the hottest days, so warm clothing is strongly recommended, as are sturdy, close-toed shoes. No pets are allowed in the caves and parking at the site requires a recreation pass, which can be purchased at the caves, from the Forest Service, or from other local vendors.

Whether new to horseback riding and are looking to set...

PLEASE NOTE: Because of safety concerns around the spread of...

Wilderness Permits are required for all overnight stays and for...

Sun Country Tours has been creating unforgettable experiences for thousands...

There's a volcano the size of Rhode Island just south...

Our new state-of-the-art indoor facility has eight indoor courts. With... 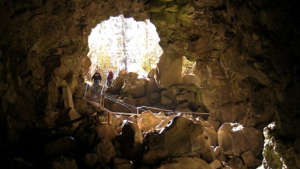