Around three miles northeast of the town of Sisters is Camp Polk Cemetery is also known as the Hindman Cemetery, for the family who settled there after the camp closed. A Civil War-era military post that existed on adjacent land, Camp Polk was named by the volunteers who were assigned … read more

Around three miles northeast of the town of Sisters is Camp Polk Cemetery is also known as the Hindman Cemetery, for the family who settled there after the camp closed. A Civil War-era military post that existed on adjacent land, Camp Polk was named by the volunteers who were assigned there, most of whom were residents of Polk County. In 1880, the Hindman family set aside a portion of their homestead when the growing number of white settlers in the area needed a proper place to bury their dead. Although the cemetery was not associated with the military post, the name Camp Polk prevailed, as the post office established by the Hindmans on their property bore the name Camp Polk and was recognized by both local residents and travelers. In 1986, the cemetery was designated a Historic Site by Deschutes County and is listed on the inventory maintained by the Oregon Commission on Historic Cemeteries. Over 170 graves are in the cemetery, along with unmarked graves that are likely there too. Nine commemorative markers recognize individuals who are believed to be buried at the site, although their graves have not been located. Camp Polk Cemetery is the final resting place for many of central Oregon’s founding settlers, including William N. Cox and Erastus P. Buchanan.

Cemetery Rd, Sisters, OR 97759 Get Directions

Spending time in the outdoors is our passion.  Whether it... 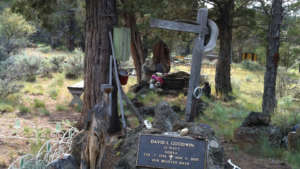